In India's Narmada District — a verdant landscape of rivers, forests and fields — villages received formal, legal recognition of their land and resource rights in 2009. This took place after a long campaign involving multiple representations to local government authorities, as well as non-violent demonstrations. Getting their rights officially recognized has enabled rural communities to better protect and restore the ancestral forests on which they depend for their livelihoods, previously at risk from infrastructure development and unsustainable management.

Even though India's rural villagers and tribal communities have typically lived on their land for generations, they often hold this land by tradition only, not by law. This situation started to change in 2007 with the enactment of India's Recognition of Forest Rights Act, one of several laws which seek to respect the rights and livelihoods of forest and indigenous peoples.

Rural communities in the Narmada District often live in a mosaic landscape, characterized by large areas of forest, interspersed with villages and plots of farmland. Being secure in the knowledge that they own their land has meant that these communities have an incentive to protect and improve it for the future. Villagers can now invest in actions like levelling, terracing and irrigating farmland for greater productivity. Some villages are also taking steps to prevent illegal forest clearing and forest fires, by patrolling the forest and brokering community agreements to manage fire. For example, communities can clear small strips of open space within forests before the onset of summer's fire season, to prevent fires from engulfing much larger areas. 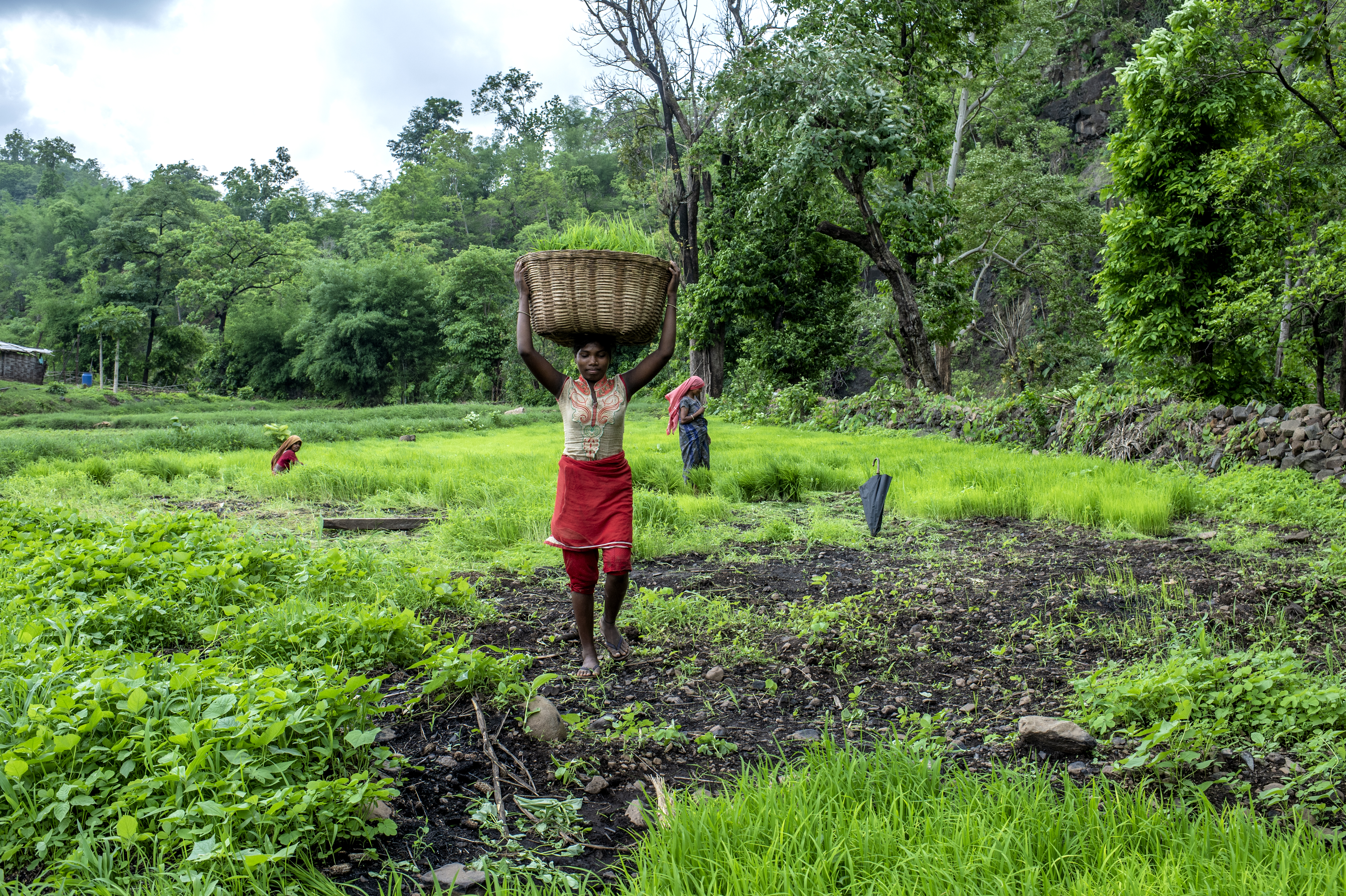 Women in Sankdi village, in India's Narmada District, work in their communally managed village field. Photo by Panos Pictures/Food and Land Use Coalition.

When Protecting Tropical Forests, Don't Forget About Their People

Forests — especially the old-growth, tropical forests that many indigenous communities depend on — are an essential line of defence in the climate crisis. Yet the world lost a Belgium-sized swath of these forests last year. As governments, businesses and media give greater attention to tropical deforestation, what many forget is that these forests are not often uninhabited wildernesses. Providing legal rights to forest communities and indigenous peoples, and investing in their livelihoods, is essential to conserving and restoring forests.

A new report from the Food and Land Use Coalition (FOLU) — Growing Better: Ten Critical Transitions to Transform Food and Land Use — sets out a path to a better, fairer future for the world's rural population. The research shows that securing forest communities' and indigenous peoples' rights and livelihoods is a fundamental prerequisite of this effort. Three case studies from Food and Land Use Coalition partner countries (including the case of India's Narmada District above) illustrate the importance of protecting and securing people's rights to their land.

This is a particularly urgent and pressing challenge: 80% of the world's extreme poor live in rural areas, often without adequate infrastructure or equitable access to land and natural resources. Half of the world's land is held communally by indigenous peoples and other rural communities (some 2.5 billion people in all). However, these groups only legally own about 10% of the world's land. Indigenous leaders who try to protect their land are at great threat around the world, with 164 environmental defenders killed in 2018 by armed gangs and criminals associated with various interests, including extractive industries. Forest and indigenous communities, as well as farmers and other rural people, are working against the odds to respond to a changing climate, sustain their livelihoods and ensure a bright and prosperous future for themselves and their families.

Invest in Sustainable Livelihoods for Rural and Indigenous Communities 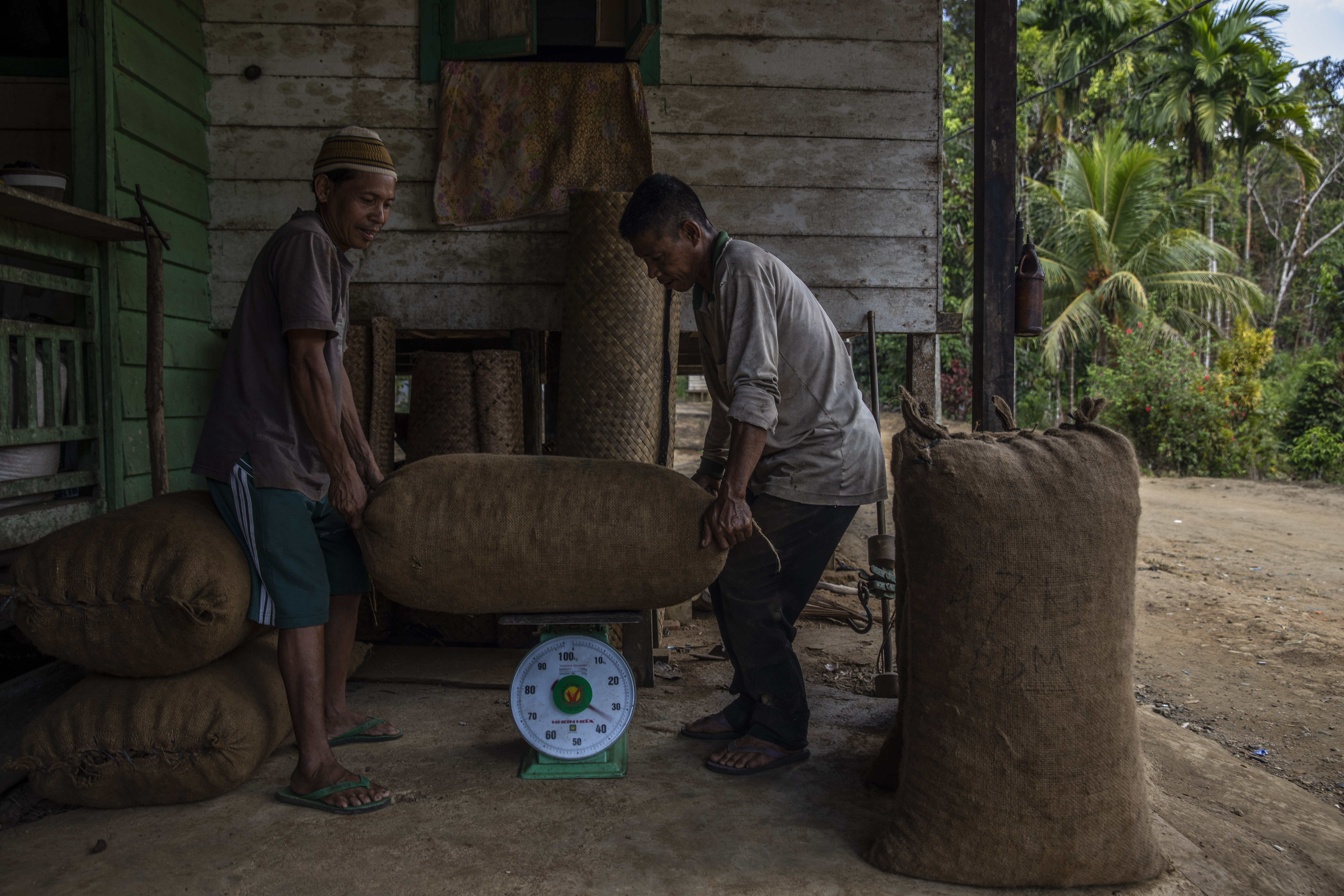 Farmers in West Kalimantan, Indonesia pack and weigh sun-dried illipe nuts as part of a social enterprise that conserves forests while providing income to local communities. Photo by Panos Pictures/Food and Land Use Coalition.

For those living in or alongside the world's remaining tropical forests, it is critically important to ensure economically viable, sustainable livelihoods that provide alternatives to deforestation. In the biodiverse forests of Kalimantan, in Indonesian Borneo, a recently established social enterprise, Forest Wise, sells wild illipe nut butter to markets in Jakarta and overseas. Wild bunch illipe nuts (highly prized for their nutritional properties) are harvested from the endangered Shorea Stenoptera tree, which only grows in the forests of Borneo. Income generated by the illipe nuts is enabling local communities to invest in the restoration and sustainable management of their lands, using techniques like agroforestry, a type of farming that integrates trees and crops.

A similar story can be found in Urabá — a state of banana plantations, cattle ranches, biodiverse forests and indigenous and Afro-Colombian populations — in northwest Colombia on the border with Panamá. Members of the Embera village of Chigorodó, as well as the Indigenous Reserves of Yaberaradó and Polines, are protecting their forests and sustaining a living through their traditional practices. These communities use the forests' diverse plants for medicine, and to develop arts and crafts. The creation of local markets for these products is enabling these communities to protect their rights and consolidate their presence on the land, at a time of great pressure on Colombia's indigenous peoples. 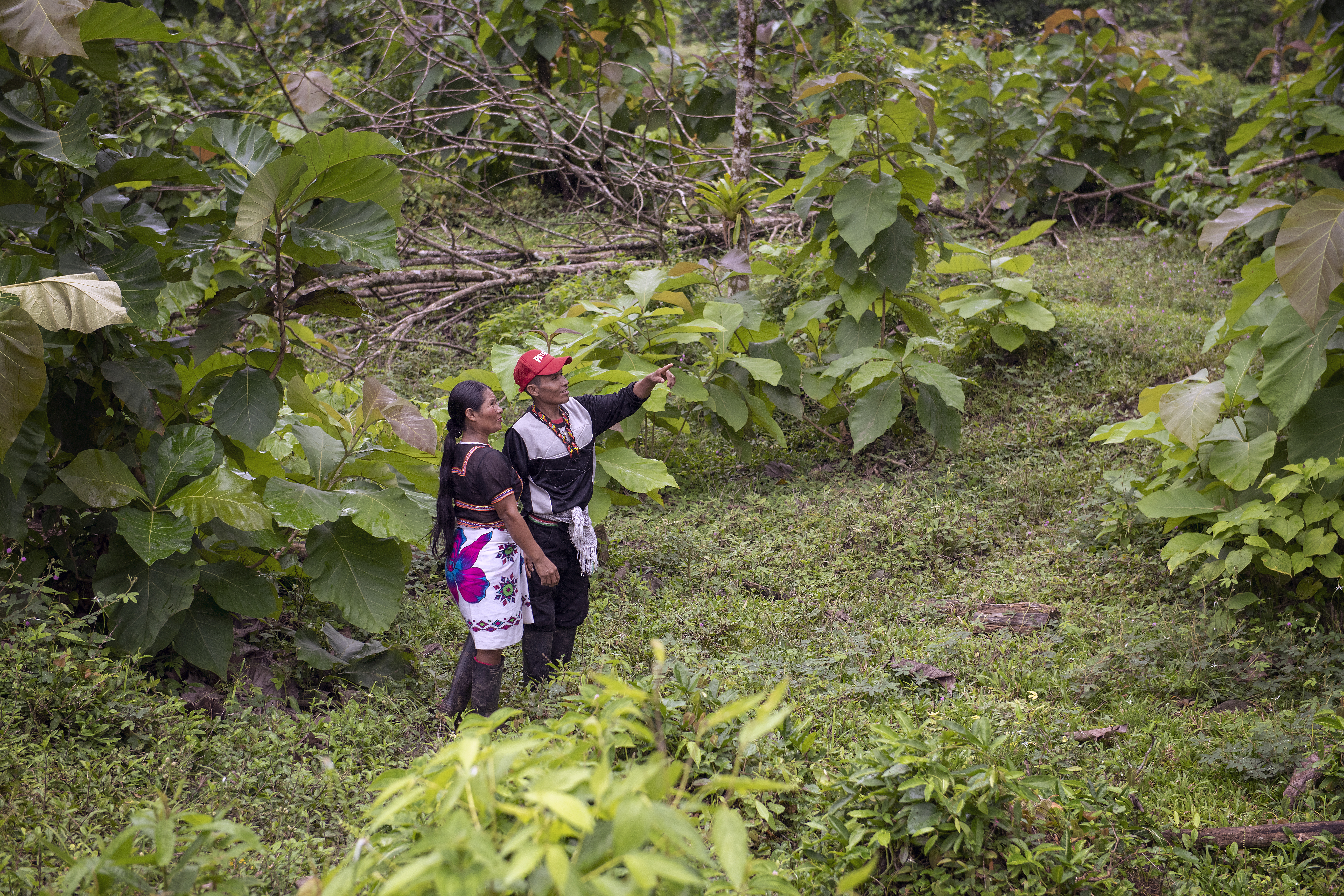 Two members of Colombia's indigenous Embera community walk in the rainforest, where they're preserving traditions and developing sustainable livelihoods. Photo by Panos Pictures/Food and Land Use Coalition.

Forest Communities on the Global Agenda

These communities have allies internationally. Nature-based solutions, climate resilience, and food and land use transformation are gaining increased attention from global leaders. The approaching UN Climate Action Summit is an opportunity for governments, business leaders, civil society, farmer and indigenous communities to mobilize behind an ambitious, shared agenda for food and land use transformation that delivers benefits for all.

Strong land rights and sustainable livelihoods for indigenous and rural communities are at the heart of this effort. The "new food and land use economy" described in Growing Better — comprising respect for the rights of the people who live on the land, coupled with conservation and restoration of critical ecosystems, and better agricultural practices — can ensure that the people who live closest to the land, and who steward the forests and ecosystems we all depend on, can flourish for decades and centuries to come. 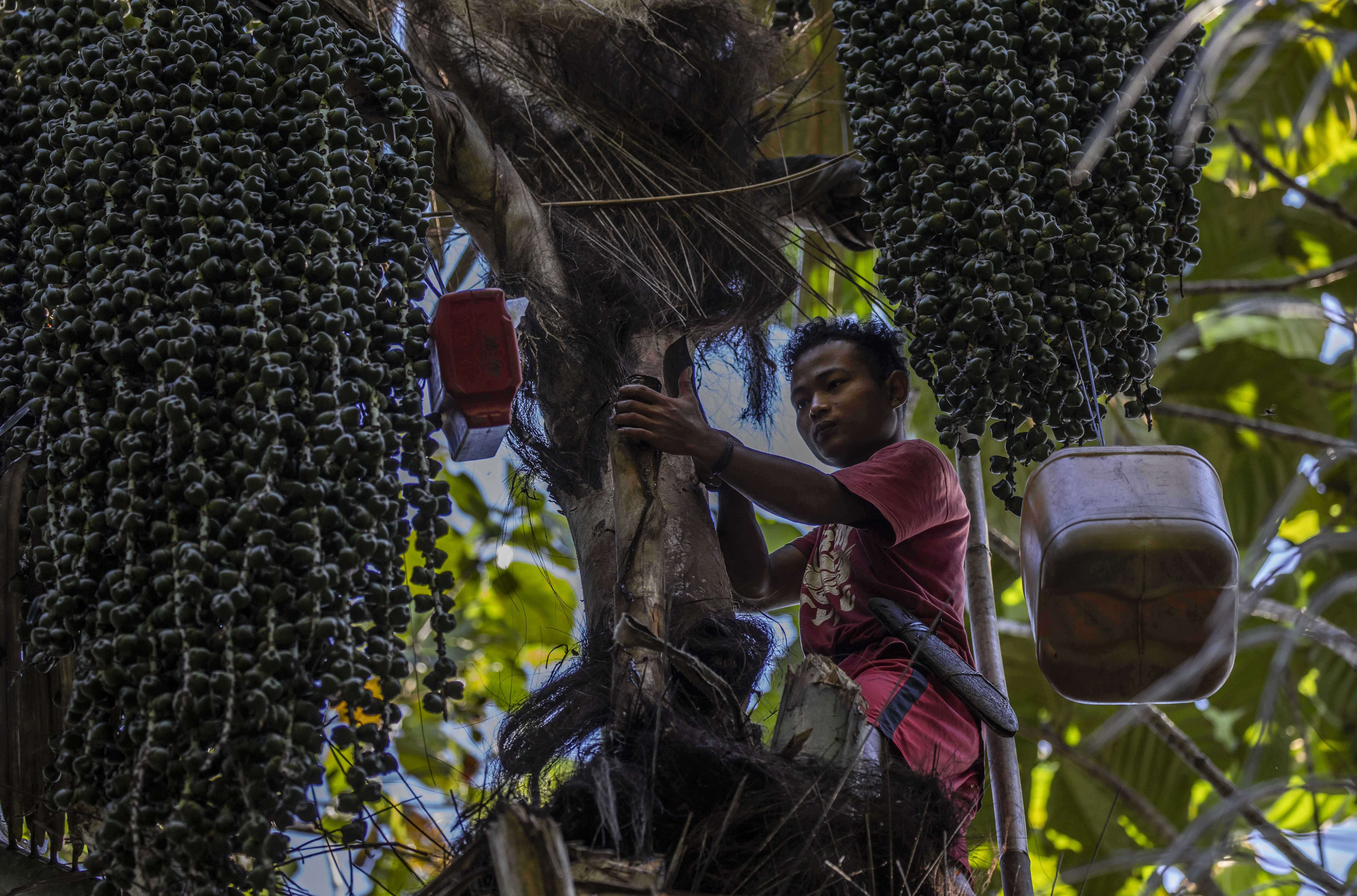 A farmer climbs a palm sugar tree to collect sap in West Kalimantan, Indonesia. Investing in rural communities' livelihoods is one of the best ways to protect forests around the world. Photo by Panos Pictures/Food and Land Use Coalition.