Home > Blog > Climate Disasters Are Getting Worse. Here's How Developing Countries Are Insuring Against Them
Comments
|
Add Comment
|
Print
Tweet

As the Bahamas reels from the devastating impacts of Hurricane Dorian, the most recent historic storm to hit the Caribbean, attention turns once again to how climate-vulnerable countries can best cope with disaster. The devastation is not unique to the Caribbean. Earlier in 2019, Tropical Cyclone Idai struck East Africa, disrupting the lives and livelihoods of over 1.5 million people in Mozambique alone and causing over $2 billion in losses. In 2018, Tropical Cyclone Gita hit the small Pacific island of Tonga, impacting almost 80 percent of its population and damaging or destroying nearly 5,000 homes.

The combination of a changing climate and patterns in economic development and urban expansion means that disasters are getting worse, both in terms of their economic and human toll. Developing countries are hit the hardest, even though they are the least equipped to deal with the impacts. Small countries—even those with high per capita incomes—are also very challenged because disaster losses are frequently large relative to their national economies and populations.

To help countries cope with disaster, new tools have emerged over the last decade, including sovereign parametric insurance. Though currently underutilized, this kind of insurance has a key role in helping countries manage the risk of climate-related and other disasters, particularly when the risk is pooled among many nations. Climate disasters will happen—the only question is whether developing countries will have the tools they need to recover and rebuild, ideally with greater resilience.

The Importance of Fast Payouts

The "sovereign" in sovereign parametric insurance just means a national government is the buyer. "Parametric" means that the insurance relies on risk modeling rather than on-the-ground damage assessments to estimate the cost of disasters. Parametric insurance policies pay out automatically when certain pre-agreed conditions, such as wind speed, rainfall, or modeled economic losses, meet or exceed a given threshold. By avoiding time-consuming damage assessments, parametric insurance can pay out much more quickly than ordinary insurance. A rapid response, in turn, means that roads and airports can return to operations faster, businesses can reopen more quickly, and affected communities can start recovering sooner, reducing long-term losses.

The concept of sovereign parametric insurance has caught on in many developing countries. It began with the Caribbean Catastrophe Risk Insurance Facility (now CCRIF SPC) in 2007. Caribbean countries created CCRIF to provide them with insurance coverage for hurricanes and earthquakes. After that, similar facilities were launched in two other regions: African governments launched the African Risk Capacity (ARC) in 2012 to provide drought coverage, and the Pacific Catastrophe Risk Insurance Company (PCRIC) was launched in 2016 to provide cyclone and earthquake coverage to Pacific Island countries. A fourth pool, the Southeast Asia Disaster Risk Insurance Facility (SEADRIF), is under development and focuses currently on flood insurance for Lao PDR, Cambodia, and Myanmar.

The growing prominence of parametric insurance has sparked a debate over its promise and limitations. Champions argue that it's a critical tool for improving developing countries' self-reliance in the face of mounting disaster risk. Detractors see it as inadequate and a distraction from the obligation of high-carbon-emitting countries, which created the climate change problem in the first place, to compensate poor countries for the climate-related damages they suffer through no fault of their own.

The State of the Art

Against this backdrop, and with the support of the InsuResilience Global Partnership, we conducted a study (which you can find here) of the three regional risk pools for developing countries: CCRIF, ARC, and PCRIC. We used a variety of research approaches to evaluate and draw lessons from their experience. We tracked how 68 countries combine sovereign parametric products with other disaster risk finance instruments. We analyzed the insurance-buying behavior of a subset of those countries. And we took a hard look at whether and how those pools are helping countries support poor and vulnerable people, who often suffer the most from disasters. In the process, we reviewed dozens of documents, visited several countries participating in the insurance pools, and talked to 75 stakeholders representing over 40 organizations and governments.

We found that while sovereign parametric insurance can help get relatively small but fast injections of cash to countries post-disaster, it cannot cover the bulk of the losses caused by climate damages. Doing so would prove prohibitively expensive, at a time when affordability of insurance policies is already a challenge for many governments.  Insurance alone cannot substitute for scaled-up flows of (often concessional) finance to help countries build resilience against disasters and rebuild after they strike. Also, we found that most countries are not using multiple disaster risk finance instruments in combination, leaving them more financially exposed to catastrophes (see figure). Less than ten percent of countries are deploying national reserve funds, insurance, and contingent credits together to cover different layers of risk, as the World Bank and other experts have long been advocating. 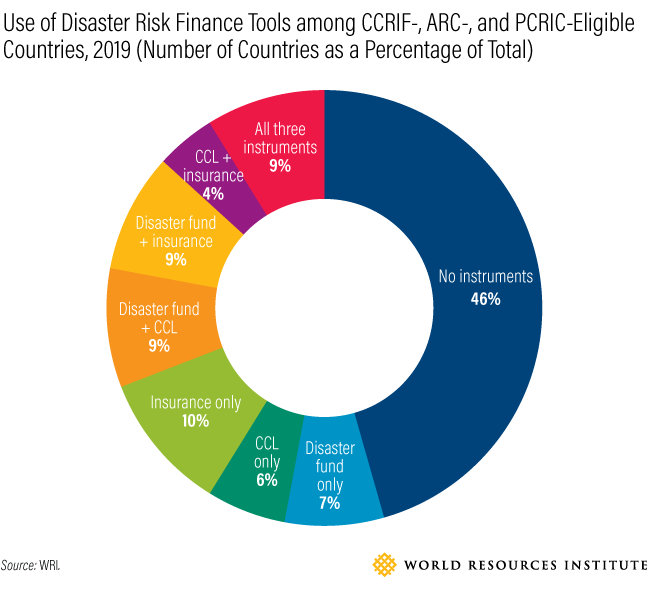 But sovereign parametric insurance—when combined with other financial instruments and a strong risk-reduction program—can be a valuable tool for managing disaster risk.  Also, the process of buying insurance itself can foster much-needed awareness and planning within governments and legislatures on the best ways to manage disaster risk. Pooling risk reduces the cost of insurance, and the payouts provide governments with much-needed funds in the days and weeks following a disaster. Perhaps more importantly, we found that the pools have matured into platforms with regional political backing, skilled personnel, risk modeling capabilities, and strong relationships to the reinsurance sector and capital markets. Their value proposition is promising, but more needs to be done to unlock its full potential.

Where Do We Go from Here?

In the study, we provide detailed recommendations for each of the pools and their stakeholders on how they can more fully achieve their value proposition. There are things the pools can do to improve affordability and to better manage basis risk and unmet expectations—the risk that a payout does not materialize because of technical problems with the model or because a government's expectations were not well aligned with the product parameters. New, innovative products need to be developed urgently, and there are several actions the pools and their government clients can take to better support poor and vulnerable people. Also, the analytical and data tools developed by the pools principally to sell insurance policies could, with some refinements, become useful to countries seeking to manage risk better in other ways.

Finally, the world needs new approaches to drive much larger and sustained volumes of concessional money into helping developing countries adopt strong disaster risk finance strategies that deploy multiple financial instruments, in addition to insurance. For example, the International Development Association (IDA)—which will soon undergo replenishment—could play a bigger role in this space. The Green Climate Fund (GCF), which has been considering doing more in disaster risk finance, could make a big impact. And regional development banks could do much more, including by partnering with the sovereign risk pools. We also explore in our paper the creation of a Risk Solutions Incentive Fund, which would drive much-needed collaboration across banks, pools, and governments.

Above all, through this research we call for a renewed dialogue and urgent action on how to better equip small and developing countries with the ability to cope with the storms brewing on the horizon.