This week’s creation of Americans for Carbon Dividends, a campaign created by former Senators John Breaux and Trent Lott, shows growing momentum for a serious bipartisan discussion about pricing carbon pollution in the United States.

The initiative supports a carbon dividend plan proposed by the Climate Leadership Council (CLC), which would set a price of $40 per ton of carbon pollution. Its endorsement by former Federal Reserve chairpeople Ben Bernanke and Janet Yellen, in addition to major corporations from Allianz to Exelon to First Solar, reflects the fact that securing a strong economy and addressing climate change can go hand-in-hand.

These events build on growing interest in carbon pricing at the state level, with more than one-fifth of U.S. states considering bills on carbon fees and dividends in the last year. The Massachusetts Senate just passed a carbon-pricing bill in mid-June.

Establishing a national carbon tax is no small undertaking. It requires careful consideration of how it can benefit all Americans (including low-income households), advance U.S. economic interests and deliver concrete benefits for the climate. WRI developed a body of research on pricing carbon that offers guidance for how an effective carbon tax can be a boon for the American economy and help rather than hurt consumers and businesses. Our new paper explores how an effective carbon tax can ensure that emissions-reduction targets are met.

A carbon tax sets a predetermined price for emissions of climate pollution, letting the market decide how to respond and ultimately determine how much emissions will be reduced. This differs from cap-and-trade programs, like the successful Regional Greenhouse Gas Initiative in the Northeast, which sets a cap on carbon emissions from power plants and lets the market set the price. Some have concluded that when it comes to benefiting the climate, carbon taxes don’t provide certainty on the magnitude of emissions reductions. However, as we detail in the new paper Achieving U.S. Emissions Targets with a Carbon Tax, this does not need to be the case.

The best start for ensuring a carbon tax delivers on emissions reductions is to set the initial price high enough to prompt increased investment in low-carbon fuels, technologies and infrastructure. Modeling shows that a strong national carbon tax would significantly decrease U.S. greenhouse gas (GHG) emissions. The Stanford Energy Modeling Forum found that various escalating carbon taxes with starting prices between $25 and $50 per metric ton in 2020 would achieve the U.S. GHG emissions target of 26 to 28 percent below 2005 levels by 2025. In A Winning Trade, CLC finds that its proposal can deliver about 32 percent below 2005 levels by 2025.

A Mechanism to Ensure Emissions Cuts Are Achieved Is Essential

While a high-enough carbon price will certainly drive down emissions, the degree to which a price signal will affect energy use and emissions is less certain. A strong emissions target mechanism will provide greater certainty about how much a carbon price can reduce emissions. This mechanism establishes predictable ways of adapting the program over time to respond to any shortfall in emissions reductions. Our report describes a basic two-step process: periodic evaluation of whether emissions reductions are on track to meet targets, followed by an adjustment mechanism if reductions are less than anticipated. These adjustment mechanisms can include: 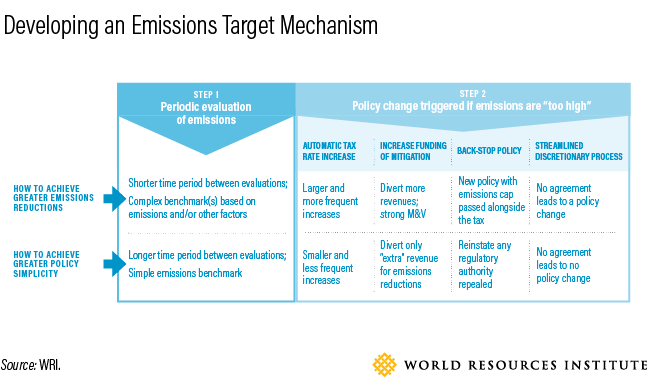 By starting with a strong price signal, such as the CLC’s proposal of $40 per ton, it is likely that an emissions-target mechanism will be unnecessary. In that way, the mechanism acts like an insurance policy – it’s there “just in case,” ensuring the desired climate benefits from a carbon tax are fully achieved.

A strong carbon tax with an emissions-target mechanism offers the greatest potential for designing a national climate strategy that is both environmentally and economically sound. We look forward to collaborating with CLC and U.S. policy-makers to advance a climate solution that bridges partisan divides, grows the economy and effectively addresses climate change.