As the threat of a trade war between the United States and China looms and rhetoric escalates, an ominous side effect has been left out of the discussion: the potential impacts on forests and the climate.

Recently, China announced that it would impose a 25 percent tariff on U.S. agricultural products including soybeans, wheat, corn, cotton, sorghum, tobacco and beef. While China has not yet announced a date for the action, its proposed tariffs on U.S. agricultural products could increase demand for soy and other agricultural products in South American countries. While this is an opportunity for Brazil and other countries to increase revenue and promote better land use practices, without the right precautions taken by governments, the private sector and the international community, a shift in soy production could put some tropical ecosystems, particularly Brazil’s Cerrado, at risk for deforestation from agricultural expansion.

China imports over half of its soybeans from South America—a total import value of $19.5 billion, with $15.6 billion from Brazil alone. And it has already started shifting its soybean demand from the U.S. to Brazil: Brazilian soybean exports to China have more than doubled since September 2017, due in part to Argentina’s drought.

With high tariffs on U.S. products, Brazil could be the main beneficiary of the trade war through preferential pricing. Analysts believe this could have long-term impacts on soy production and permanently shift demand to South America. This assumes high elasticity of soy production and price. If increased demand from China leads to increased soy production, soy could encroach on forests if proper safeguards and agricultural practices are not used.

According to a meta-analysis of the drivers of deforestation, agricultural prices are the strongest factor in increased deforestation. Land-use changes with respect to price are much more elastic in Brazil than the U.S. Put simply, this means that if prices increase, soy production in Brazil would tend to expand, as it did when Brazilian soybean prices rose in the early 2000s. Conversely, lower prices could facilitate certain political and environmental shifts. For example, Brazil’s 2006 soy moratorium, a voluntary zero-deforestation agreement by the soy industry, was possible in part because it came at a time when soy prices were low.

The possibility of a trade war between China and the U.S. has already sent Brazilian soybean premiums soaring, rallying to a 21-month high. And the risk of deforestation extends beyond the Brazilian Amazon to other ecosystems such as the Cerrado (a savannah biome with a mix of forested areas and grasslands), and beyond Brazil to neighboring Paraguay, Argentina and Bolivia.

In addition to having the potential to impact Brazil’s forests, greater cultivation of soy could also affect Brazil’s emissions and its ability to reach its Nationally Determined Contribution (NDC) commitments to the Paris Climate Agreement. Land-use changes and forestry combined with agriculture contributed 28.6ktCO2e of Brazil’s emissions from 1990–2014, 74 percent of the national total. Further deforestation from increased agricultural production would push Brazil’s total emissions even higher.

Here we can embed emission data from Climate Watch:

If a trade war results in soaring demand for Brazilian soy, what should policymakers and companies do to counteract the potential damage to forests? The answer may lie in past efforts to de-couple commodity production from deforestation.

The Brazilian government has had success in limiting soy-driven deforestation through high-tech satellite monitoring of forests, paired with muscular enforcement of forest conservation laws.  Moreover, companies have nearly eliminated deforestation from key soy supply chains through the Amazon Soy Moratorium. They could strengthen this policy further by expanding protection to forested areas in the Cerrado and other biomes. 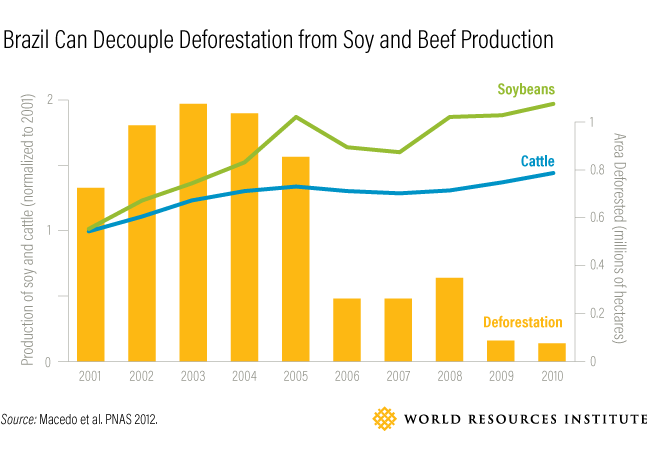 Companies have already made progress by committing to halt deforestation. This commitment was inspired by the Cerrado Manifesto, a call to action by 60 leading Brazilian researchers and social and environmental organizations for companies that purchase soy and meat from within the biome to eliminate deforestation within the biome. Companies can also utilize innovative technology solutions to implement their deforestation commitments—for example, the deforestation and soy-related data on Global Forest Watch and soon, GFW Pro, a new application to manage deforestation risks in commodity supply chains.

Climate finance could help buffer forests against commodity price fluctuations by providing incentives for conservation. But the finance to support deforestation-free trade is missing. In 2016, less than 2 percent ($3 billion) of $141 billion in public climate funding was assigned for land and forests—even though it’s estimated that conservation and restoration could deliver 60 percent of the emissions reductions needed to achieve carbon neutrality by 2050 in Latin America and the Caribbean. With greater focus on the land use sector, countries could reach their NDC commitments, and international climate funds and donor nations could get a great return on their investment.

Brazil and other South American countries may see some economic benefits from a trade war between the U.S. and China, but the potential costs are high. A soy boom could come at the risk of forests, which underpin vital local services such as water supply and essential global services such as carbon storage. There’s a better way. Trade wars have winners and losers, but if Brazil’s forests are conserved, we will all benefit.