People pay a lot to visit coral reefs and beaches. But will they pay a bit more to protect these ecosystems?

Threats to coral reefs and beaches are also threats to tropical economies—coral reefs alone are responsible for attracting $36 billion in global tourism spending per year, providing critical income to many developing countries. However, this revenue is endangered by local environmental pressures like overfishing, coastal overdevelopment and pollution—along with climate-related threats like ocean warming, sea-level rise and more intense storms.

The bad news, according to research co-authored by WRI experts and published by the Caribbean Tourism Organization and the University of North Carolina Wilmington, is that tourists may not come back to ecosystems damaged by these dangers. The good news is more surprising: tourists are willing to pay a premium to protect the ecosystems they visit, providing a much-needed buffer for economies seeking funding for projects that will reduce harm to reefs and beaches.

What a Reef Is Worth

The Mapping Ocean Wealth study, led by The Nature Conservancy, found that the world's coral reefs attract 70 million tourists each year, generating $36 billion in global tourism spending annually. It also found that more than 70 countries and territories have million-dollar reefs: reefs that generate more than $1 million in tourism spending per square kilometer per year. The study used an innovative approach, combining location-specific data from social media and geo-tagged Flickr photos, along with national-level data on tourist spending, to map coral reef-dependent tourism around the world. You can explore the values of your favorite tropical destination on this interactive map.

Barbados, a world-renowned tourism destination, is one of the "million-dollar reef" countries. Nearly 40 percent of employment, and of total economic activity on the island, is related to tourism. And the vast majority of tourism in Barbados happens along its coasts, on beaches and near coral reefs. However, as in many other coastal destinations, coastal and marine resources are under the intense pressures described above.

How can Barbados expect tourists to react as reefs degrade, beaches become narrower and seawater quality declines—and as risk of tropical storms and hurricanes increases? Would tourists spend as much money in Barbados as before or might they stop coming altogether?

Tourists Will Pay to Protect Beaches and Reefs

Another recent study, led by the Caribbean Tourism Organization (CTO) and the University of North Carolina Wilmington (UNCW), puts some numbers to these risks. Through a survey of more than 3,000 visitors to Barbados, researchers found that a significant number of visitors indicate that they would not be likely to return to Barbados if environmental quality declines, particularly the quality of seawater. If seawater quality decreased to a point where the risk of stomach infection from swimming increased by just 5 percent, nearly half of all visitors said they would probably not come back to Barbados. Similar but smaller effects were found under scenarios of narrower beaches, poor health of corals and marine life (fish and turtles) and higher storm risk. 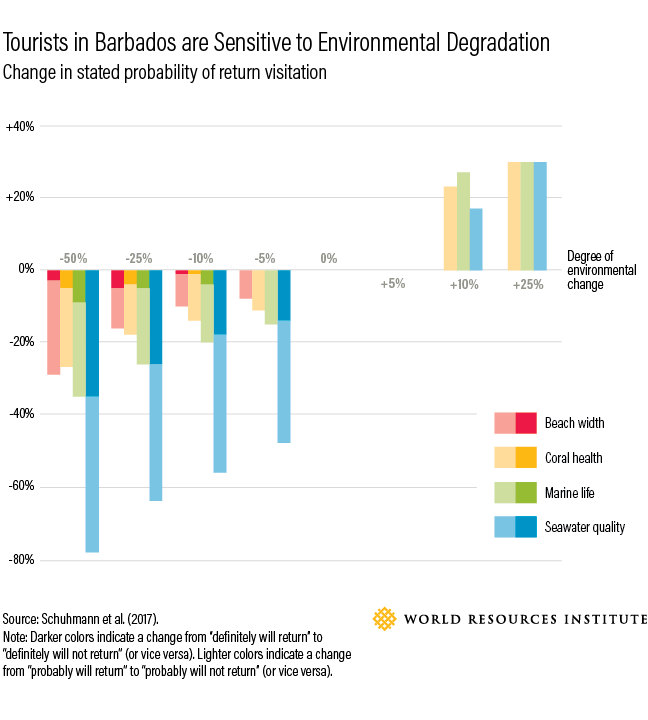 With so much at stake, protecting seawater quality, beaches and reefs in Barbados—and across the tropics—will be important to ensure that tourists continue to come and enjoy the sun, sand and sea. But improving natural resource management requires resources. Are tourists themselves willing to pay a bit extra to maintain the quality of Barbados' beaches, reefs and seawater?

The CTO-UNCW study asked this question, and found that a large majority of Barbados visitors are willing to pay a $5 fee to help fund the long-term protection of coastal and marine resources in the country. This fee, if paid into a fund dedicated to coastal and marine protection, could generate upwards of $2.5 million per year for conservation and management, while having a negligible impact on tourism arrivals. 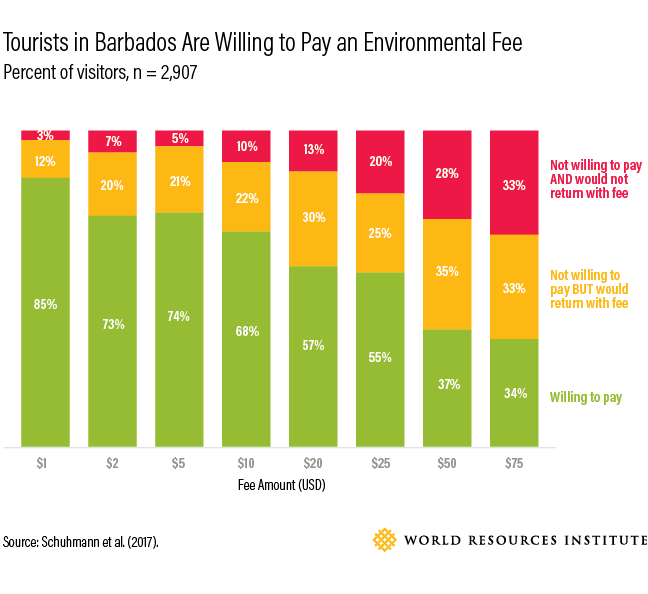 Danger and Hope for Coastal Ecosystems

The global Mapping Ocean Wealth study shines new light on the importance of coastal ecosystems to tourism economies across the tropics. The Barbados study complements it by revealing detailed data on tourists' preferences and willingness to pay to conserve the very natural resources they enjoy. These findings can be useful to policymakers, the tourism industry and civil society organizations in Barbados and other tropical destinations as they seek to identify and finance strategies for coastal conservation and sustainable tourism development—helping to safeguard million-dollar reefs and beaches far into the future.