As part of the world’s largest archipelago, Indonesia faces a unique challenge in achieving equitable development across its 16,000 islands. Despite strong overall economic growth, development is still concentrated in the western parts of Indonesia, like Java, while the more remote islands in the east struggle to keep up. Therefore, President Joko Widodo’s commitment to boost the economy in Indonesia’s easternmost provinces―Papua and West Papua―is welcomed by most.

While oil palm expansion brings the promise of economic growth, its impacts include irreparable deforestation and health crises caused by forest and land fires. For long-term economic development to be beneficial to Papua and West Papua, Indonesia must figure out how to move forward without depleting the environmental resources and ecosystem services that are vital to the livelihoods and well-being of local communities.

Papua and West Papua share the island of New Guinea with the nation of Papua New Guinea, which occupies the eastern half. The island is home to the spectacular birds of paradise and the third-largest expanse of rainforest in the world. Papua and West Papua alone hold about one-third of Indonesia’s remaining rainforest. As Indonesia’s agricultural sector—the country’s main economic driver—continues to grow, the associated deforestation is rapidly moving east and threatening these last remaining forests. In 2015, Papua experienced its highest forest cover loss yet. 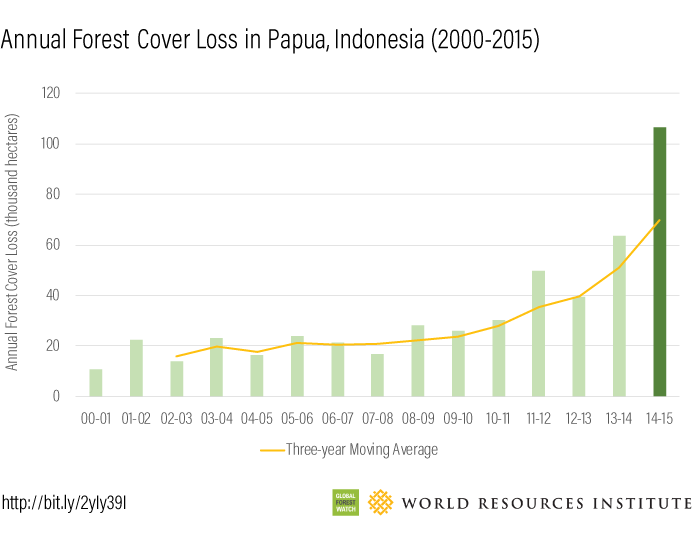 A recent pilot of “Places to Watch,” a Global Forest Watch initiative aimed at detecting deforestation hotspots around the world, exposed a dramatic example of tree cover loss in Papua. An oil palm company cleared at least 3,700 hectares (about one-third the size of Paris) of primary forest in the Boven Digoel Regency.

View this area on the GFW interactive map.

With help from local NGOs, including Greenpeace Sorong and Pusaka, we found that the loss occurred in an area of forest approved for oil palm production under a Ministerial Decree in 2012. Although the loss is considered “planned” deforestation and legal, clearing such a large expanse of natural forest can permanently damage the ecosystem and ultimately reduce its economic productivity.

Communities near the clearing are already experiencing the economic consequences as the plantation reduces their income from forest products and their ability to collect wood for housing and fuel. Local farmers also reported crop failure due to pests associated with the oil palm plantation. These communities also risk the permanent loss of critical ecosystem services, including air and water purification, which could pose additional financial and health burdens.

The clearing detected by Places to Watch is hardly an isolated case. Boven Digoel’s forests have been cleared at an unprecedented rate over the last 15 years. 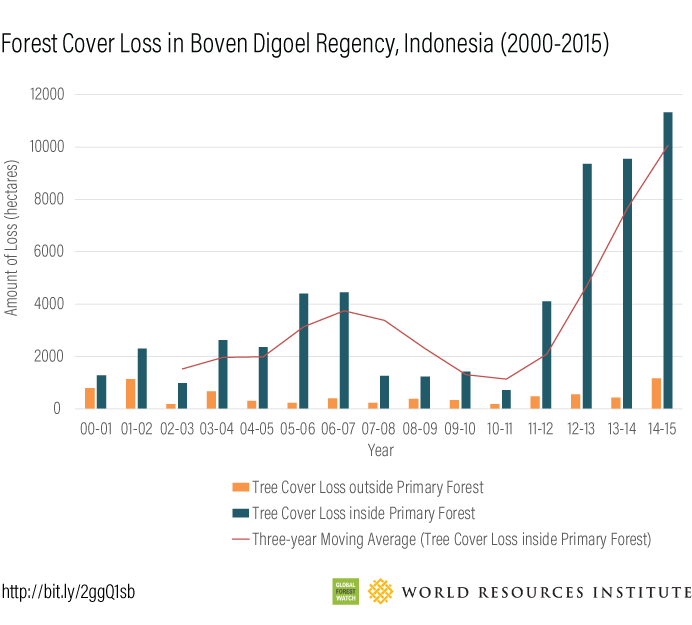 Economic development and environmental stewardship don’t have to compete. Several concrete steps can be taken to ensure Papua and West Papua provinces benefit from economic growth, while conserving the natural resources that enrich local communities:

President Widodo’s focus on economic justice policies (ekonomi berkeadilan) must permeate every level of society, including indigenous groups and local people in the Papua and West Papua provinces. Development that is not done inclusively will only serve to damage Papua’s economic prospects and harm community well-being.

Places to Watch is an action network initiative that utilizes Global Forest Watch’s weekly deforestation alerts to identify concerning forest clearing on a monthly basis, empowering further investigation and informed action. Sign up for Places to Watch updates to be notified when the initiative publicly launches.