WRI Vice President for Communications Lawrence MacDonald recently visited Indonesia to learn about the interplay between land rights and deforestation. This is the first of three posts about the farmers, companies, officials and researchers working towards One Map.

Saad, 58, a landless farmer and sometimes barber, holds a sheaf of legal papers and gestures across the Musi River in South Sumatra, Indonesia, towards the 38 hectares (94 acres) his family once owned.

“My father was the village head,” he says. “We grew rice and vegetables and fruit on that land. We had enough for ourselves and plenty to sell. That land belongs to me and my brothers and sisters.”

But they no longer control it. In 1997, Saad says, a company bulldozed the land and planted oil palm, incorporating the family plot into a massive plantation. For two years, his family received a monthly payment equivalent to about $60. Then the payments stopped: The plantation had been acquired by a different company.

Saad, who like many Indonesians uses just one name, has been arguing his case for compensation ever since.

Asked if he would like to regain the land, he shakes his head. The land is ruined, he says, no longer suitable for growing rice. The stream that watered the fields is gone, replaced with a network of drainage ditches. Fertilizer and pesticide runoff fouls the river. “We want to be paid so we can buy new land in another place,” he says.

Saad’s story is all-too-common. Since the 1990s, palm oil plantations have spread across millions of hectares of Sumatra and other Indonesian islands, destroying primary forests, small family farms like Saad’s, and community-held forests that provided timber, roofing materials, fruit and medicine. 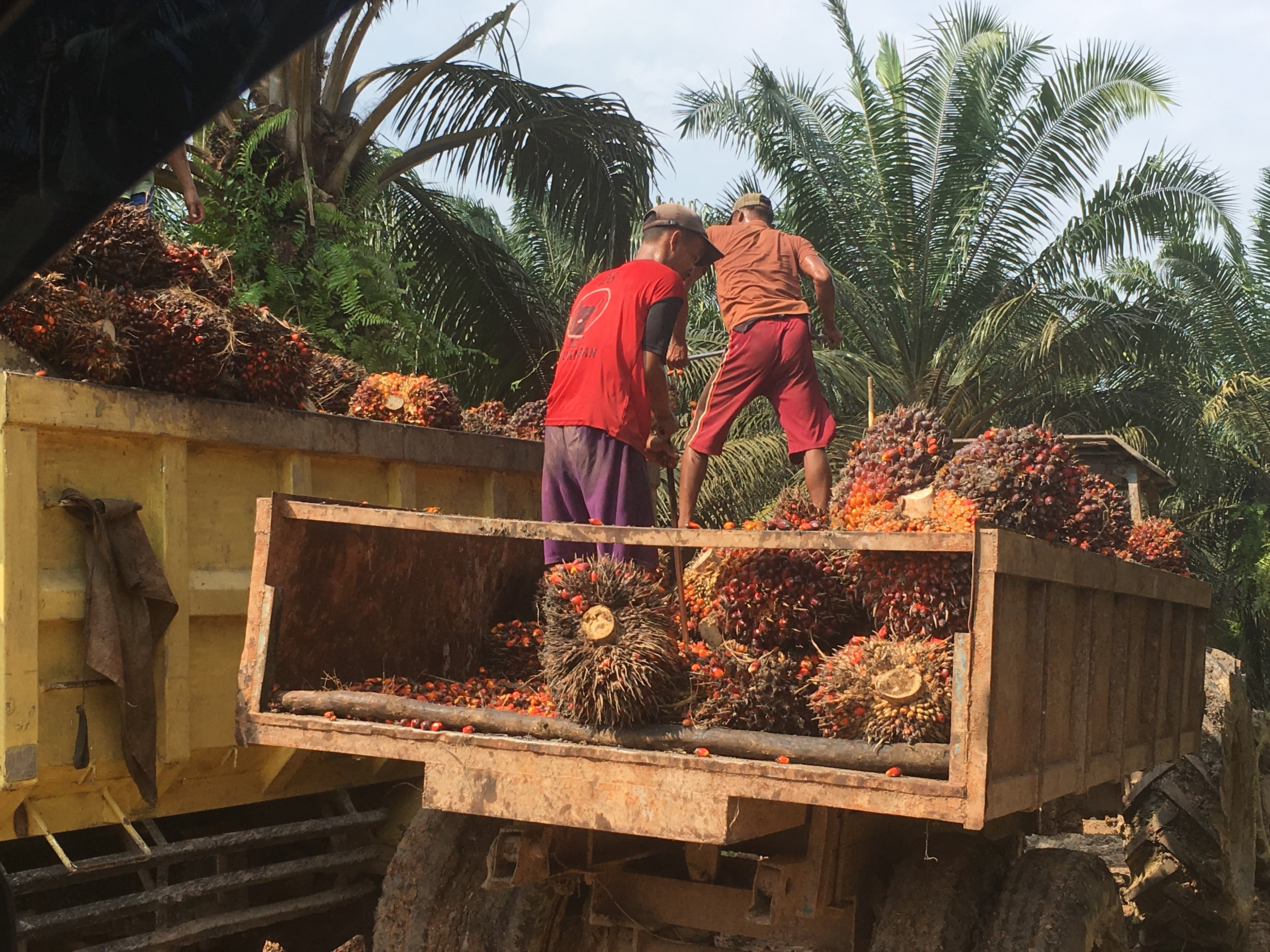 Used in food, cosmetics, biodiesel and hundreds of other products around the world, palm oil has created vast fortunes and annually earns Indonesia billions of dollars in foreign exchange. But the costs are huge. A World Bank study found that massive fires in 2015 associated with land clearing—much of it for palm oil--cost the Indonesian economy $16 billion, twice the value-added of the country’s palm oil exports.

Conflicting maps are a big part of the problem.

Indonesia’s sweeping decentralization in 1999 opened the way for a plethora of government agencies to grant land concessions to deep-pocket investors eager to cash in on the palm oil boom. Each agency devised its own maps.

Saad flips through his sheaf of papers and points to his own small map in which his family’s irregular plot is overlaid with a rigid grid of plantation roads. The agency that authorized the palm oil plantation likely had no knowledge of and little interest in his family’s prior claim. 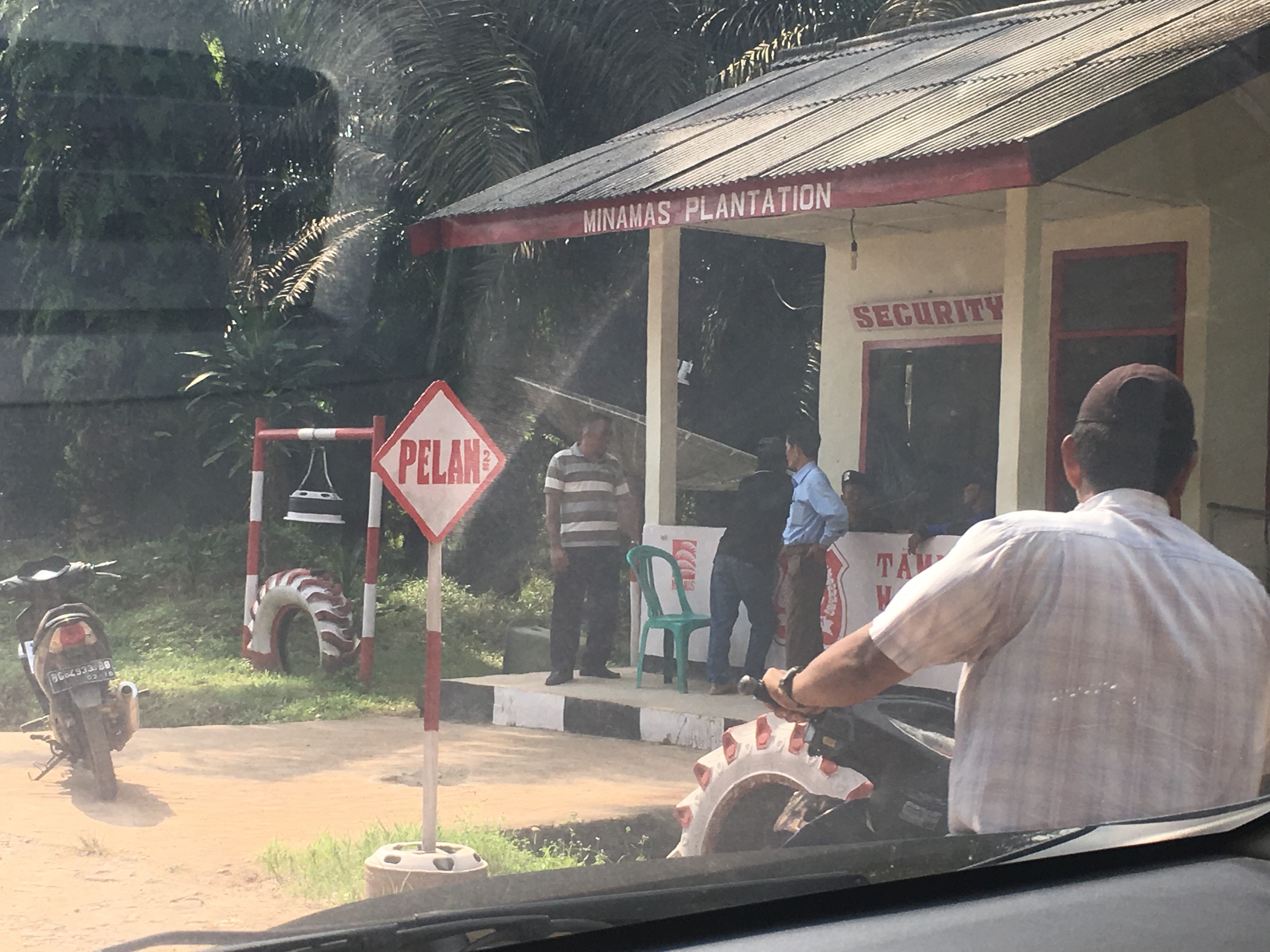 Security station guards the entrance to a palm oil plantation in Musi Banuasin, a sub-district in South Sumatra. Photo by WRI

Lack of a common land use map and slow-moving, dysfunctional courts mean that those who feel they have been wronged have few options for seeking redress, so disputes fester and sometimes turn violent.

Across the river, villagers recently threw together makeshift blockades, stopping the plantation from harvesting the bright orange bunches of oil-laden seeds that fetch about $4 each at the processing mills. They acted after the company replanted a vast track of oil palm that was nearing the end of its 25-year productivity span, a signal that the company had no intention of returning the land to villagers.

For now, the villagers are resisting the temptation to harvest the valuable fruit, letting it rot rather than risk being accused of theft— and perhaps provoking the company to order its armed guards to bust the blockade, as has happened in other locations.

The One Map Path Forward

To address problems like these, the government is working to create a single map of Indonesia, employing participatory mapping and conflict transformation techniques through an initiative called One Map. WRI Indonesia is supporting these efforts in South Sumatra and three other provinces through a program called One Map Initiative at the Local Level.

For Saad and his neighbors, such relief can’t come soon enough.