Canada recently reaffirmed its commitment to champion climate action and embrace the economic opportunities of clean growth. In 2015, the country set a goal to reduce greenhouse gas emissions by 30 percent below 2005 levels by 2030. To meet this goal, Canada will need to reduce greenhouse gas emissions by around 210 million tonnes (232 million tons) by 2030 from 2014 levels.

Canada has faced scrutiny for lacking a sufficiently ambitious climate goal, and lags behind its peers in terms of how fast it aims to decarbonize its economy after 2020. There is also domestic and international criticism towards Canada over environmental impacts associated with Alberta’s oil sands. At the same time, Canada has taken concrete steps over the last year to make good on its pledges. Here’s a closer look at seven key milestones.

The Canadian government announces the Vancouver Declaration on clean growth and climate change. This declaration launches a negotiation process between the federal and provincial/territorial governments to agree on a national plan to reach Canada’s 2030 target. The Declaration outlines Canada’s plans to increase its level of ambition to deliver greater mitigation and adaptation actions, while enhancing cooperation and promoting clean economic growth.

Canada agrees to the North American Climate, Clean Energy, and Environment Partnership Action Plan, which brings about enhanced cooperation on climate and energy between Canada, Mexico and the United States. The Partnership sets new mitigation goals: to reduce methane emissions in the oil and gas sector by 40–45 percent by 2025, strengthen energy efficiency and vehicle emissions standards, and achieve 50 percent clean power generation in North America by 2025. In 2014, the three countries generated around 37 percent of power from clean sources. The Partnership also includes plans to conserve nature by supporting biodiversity and protecting species such as migratory birds and the Monarch butterfly. 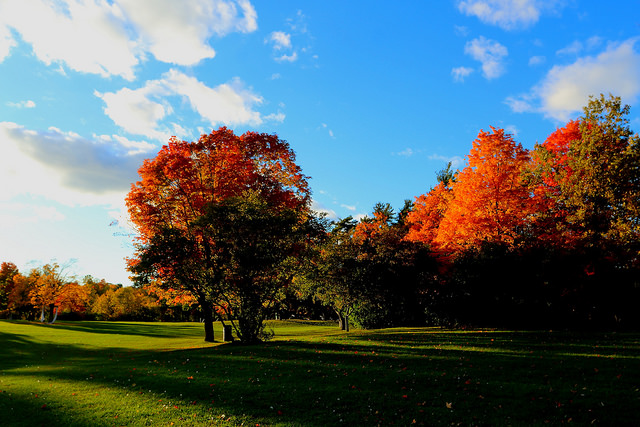 The Canadian government proposes a pan-Canadian approach to carbon pricing, starting at a minimum of CA$10 ($7.31) per tonne in 2018 and rising by CA$10 a year to reach CA$50 ($36.55) per tonne in 2022. Provinces and territories have flexibility in deciding how they will implement carbon pricing—by either pricing carbon directly or adopting a cap-and-trade system—and flexibility in choosing how they will spend the revenue generated from these schemes.

Canada becomes one of the first countries to release an initial mid-century strategy, which outlines its long-term vision and framework for low-emissions development. In this strategy, Canada examines an emissions abatement pathway that is consistent with reducing greenhouse gas emissions by 80 percent by 2050, relative to 2005 levels. A major theme running through this strategy is Canada’s commitment to innovation, which the country views as key in the transition toward a low-carbon economy.

Canada presents its plan to reduce GHG emissions and meet its international commitments while sustaining economic growth, known as the Pan-Canadian Framework on Clean Growth and Climate Change (PCF). The new framework comprises four main pillars: pricing carbon; complementary measures to further reduce emissions such as energy efficiency standards; measures to adapt to the impacts of climate change and build resilience; and actions to accelerate innovation, support clean technology and create jobs. This is the first time that several governments across Canada agree to a strategy to meet the 2030 national target. Saskatchewan and Manitoba are the only provinces to not sign on to the plan, citing concerns over carbon pricing and health care spending, respectively. 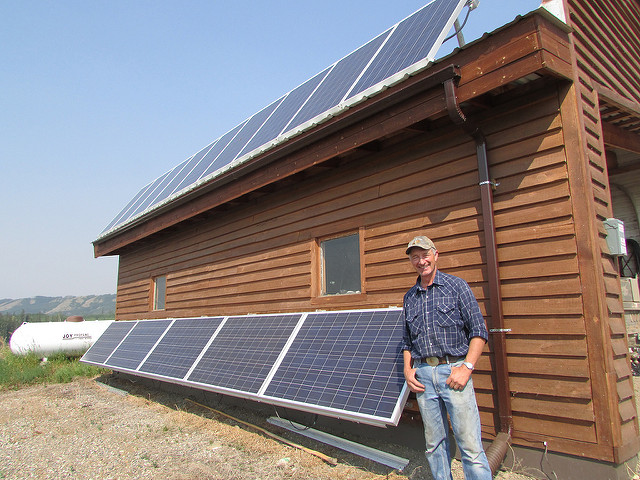 This man in British Columbia has just installed solar panels on his home. Photo by DeSmog Canada/Flickr

Canada’s finance minister presents the 2017 budget, which includes plans to invest CA$21.9 billion in green infrastructure over the next 11 years. This investment covers initiatives that will support the implementation of the PCF, such as the allocation of CA$2 billion over five years to establish the Low Carbon Economy Fund. The fund will support actions that significantly reduce greenhouse gas emissions and are in addition to current plans.

Canada releases its latest national greenhouse gas inventory report. The report shows a continued decoupling of emissions from economic growth—since 2005, the emissions intensity per unit of GDP has decreased by 16.4 percent. The report also includes Canada’s latest emissions projections, highlighting that the measures to be implemented under the PCF will bend the curve significantly, reducing greenhouse gas emissions by around 175 million tonnes (193 million tons) in 2030. While these measures still fall short of achieving the 2030 target, the report notes that this estimate doesn’t include the full suite of commitments under the PCF. 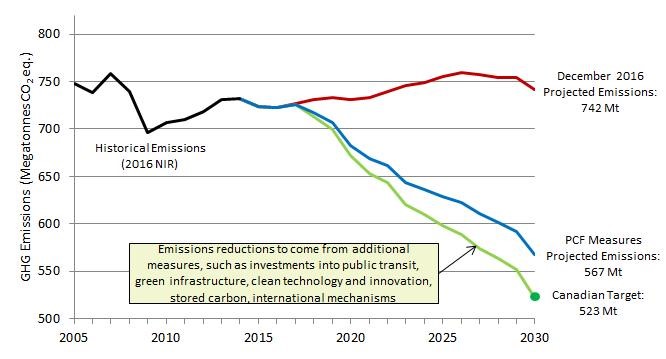 Over the last year, Canada has pursued several strategies to meet its 2030 target. Although the government still needs to turn several of these plans into action, it has secured the support of most provinces and territories, and has made clean growth a key element of its 2017 budget. As Canada turns to implement the identified actions, it should use its mid-century strategy as a guidepost toward achieving the 2030 target. This will help to avoid costly missteps by ensuring the alignment of medium- and long-term objectives and minimize the risk of carbon lock-in associated with country’s oil sands industry. While greater ambition is still needed globally, these are encouraging steps on the pathway toward a low-carbon economy.