In a packed room at the climate talks in Marrakech, Morocco, a group of foreign and environmental ministers, leaders from multilateral organizations, and media jostled for space. The crowd spilled into the conference center hallways. A palpable buzz was in the air.

“Thank you for turning Paris into reality. We are writing history. And it begins today,” said Minister Hakima El Haité of Morocco, which hosted the international climate talks (COP22).

What was the buzz about?

The new NDC Partnership, which brings together 33 countries and 9 international institutions to develop tools, share best practices, and facilitate support for countries to achieve ambitious climate and development targets as quickly as possible. Over 20 participants took part in the launch event, including the partnership’s first co-chairs, the governments of Morocco and Germany.

“This feels like the right idea at the right time,” said Minister of State Nick Hurd of the United Kingdom. “Because we all know the real test of commitment to the Paris Agreement is that every country does what it says it would do.” 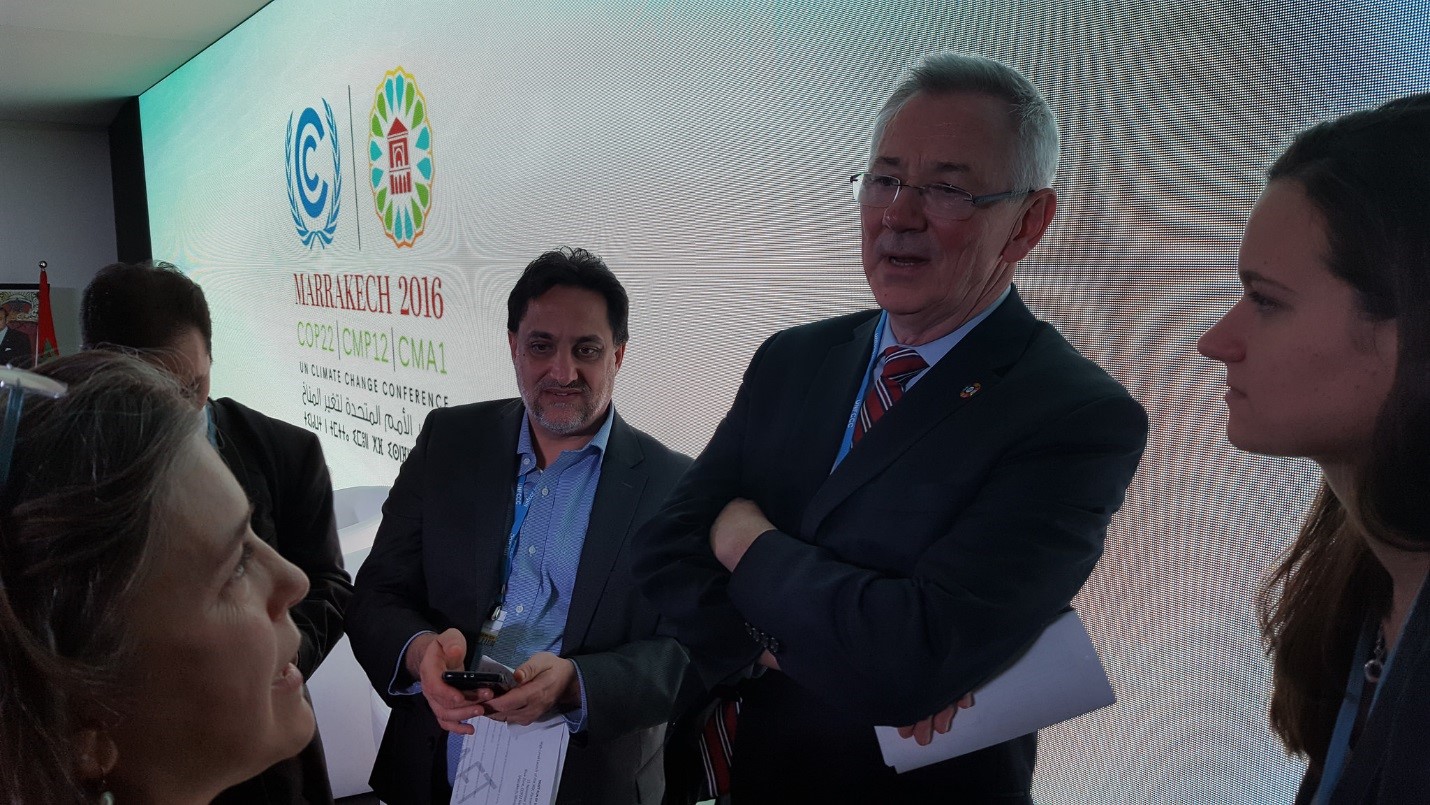 The partnership was launched a year after the historic climate agreement in Paris and just days after the Agreement went into force. If last year’s agreements were about making commitments, now it’s about how to ramp up action on the ground.

U.S. Special Envoy on Climate Change Jonathan Pershing remarked that there has been remarkable progress just in the past year. “We have changed the world, make no mistake about it,” Pershing said. “And now what we are doing is accelerating that exercise, and this agenda can facilitate that endeavor.”

The partnership provides a forum for countries to work together to achieve or exceed their national climate plans in three ways: creating global knowledge platforms; facilitating technical assistance; and improving coordination with the private sector, countries and institutions.

Minister Edna Molewa of South Africa said, “Partnerships are very, very effective in fast-tracking implementation, particularly when they are well-managed with clear objectives as we see them being now.”

At the event, Australia, Denmark, Germany and the United Kingdom announced millions of dollars in funding to support the NDC Partnership’s efforts.

In addition, the partnership’s first knowledge product was released during COP22: the NDC Funding & Initiatives Navigator, an online database that tracks climate finance and other support initiatives. There are already more than 450 activities listed in the database.

In order to accelerate climate action, countries need financial resources to design and carry out policies and programs, monitor and evaluate progress, and share ideas. But that is only part of the picture. As Stefano Manservisi, Director General for Development of the European Commission, stated, “It’s not only about money, it’s about sharing … We stand ready to work, to discuss, to share, because this is about our common future.”

Vice Minister Vo Tuan Nhan of Vietnam agreed, noting many ways the partnership will help. He noted, “International support on finance, technology transfer, capacity-building, and exchange of experiences among countries is already playing an important role to increase ambition in responding to climate change.”

With the Paris Agreement and the Sustainable Development Goals, the world has entered a new era of development. The commitments in these agreements are driven by national actions and priorities. Furthermore, they are universal in nature so that information, ideas and finances flow in multiple directions.

The NDC Partnership reflects this reality.

“It’s a completely different way of doing business,” said Laura Tuck, Vice President of Sustainable Development at the World Bank. “We are bringing together cooperation between countries, donors, experts, financing institutions, in a collective way. Picture all these countries out there, they don’t know where to go. How do they start? To whom do they turn? This is the spot.”

Along these lines, the NDC Partnership will connect the dots and help many existing initiatives achieve more than they could on their own.

As Minister Barbara Hendricks of Germany said, “Each country has to find its own path to effective climate action and sustainable development. But while we follow our paths, we can all learn from each other.”

A Partnership of High Ambition

One line that was echoed throughout the event is that the launch of the NDC Partnership is was destined to be one of the highlights of COP22. Laurence Tubiana reinforced this idea when she mentioned the partnership at the closing plenary of COP22.

Like most things worth doing, mobilizing action on climate change is not always straightforward or easy, but the long-term benefits are clear. The NDC Partnership should provide a major boost for projects that will rein in emissions and drive transformative low-carbon and climate-resilient sustainable development.