In 2004 I was on my knees scrabbling through the Cameroon rainforest. A keen botanist, I’d signed up as a volunteer with an NGO to help map the forest and search for new species. One day whilst hiking along a surging river, I came across a little shrub, no taller than my knee, peppered with bright blue flowers. Not recognizing the bush, I called over one of the local scientists in our group. He immediately alerted the botany professor who, in turn, got very excited. They had never seen a shrub like it before, and it turned out to be a new species.

Now as you can imagine, I became rather attached to this little shrub and, with so much deforestation happening in Cameroon, was concerned about its fate. So one night around the camp stove, I pulled the professor aside and asked what his organization would do to help preserve the forest and change the behavior of locals from cutting down trees. He assured me not to worry—they had plans back at the office to make and distribute a poster about caring for the trees and preventing their destruction. “Hmm,” I muttered rather unimpressed, “Is that all?” “No, no” he retorted, “We are also going to do some leaflets!” I walked away from the fire and thought to myself, “This is not good, not good at all.”

But just how unimpressive the planned response really was didn’t fully hit me until I got back to work. At the time, I worked at Procter and Gamble selling and marketing Pringles potato chips. I was part of a team who knew exactly how to influence people. We developed memorable advertising, with compelling benefits and displays that made people buy. All this for potato chips, while real issues like saving the rainforest weren’t getting any sort of attention from marketing experts.

I was reminded of this experience about a year ago when Janet Ranganathan from the World Resources Institute (WRI) talked to me about sustainable diets. Their researchers had learnt that the type, combination and quantity of food people eat has an important impact on resource use and the environment—and that meat and dairy, especially beef, were particularly harmful.

For example, did you know that more than two-thirds of total greenhouse gases from food production comes from meat and dairy, even though they only contribute 37 percent of total protein consumed? And that more than three-quarters of the world’s agricultural land (including pastureland and land that grows crops for livestock feed) is used to produce meat and dairy?

In contrast, plant-based proteins use far less resources. Not that everyone needs to become vegetarian or vegan—even a moderate shift from high-impact to lower-impact foods can help. For example, WRI found that if the average American halved their meat and dairy consumption, the land use and GHG emissions associated with their diet would be cut by nearly half. Applied to the 2 billion people in the world who are “high consumers” of protein, this would free up 640 million hectares of agricultural land, an area roughly twice the size of India.

WRI’s experts were keen to get my thoughts on how to help people make these diet shifts. To get started, we compiled many of the campaigns around the world that have tried to change meat-eating habits. It was a fascinating exercise, and we noticed a clear pattern. The majority of action so far has involved information campaigns educating consumers about the environmental, health and animal welfare issues of eating meat. A large number of campaigns, especially from the vegetarian and vegan community, advocated for folks to abstain from animal products entirely.

This activity has clearly shifted a minority of people, but much like the posters in village huts in Cameroon, it hasn’t shifted the majority of people to new behavior patterns.

Recent marketing and behavioral science has found that most people choose what they buy based on habit, rather than rational, informed decisions. When consumers do deviate from habit, attributes like price, taste and quality tend to be more important than sustainability in changing purchasing decisions.

Just giving people information and telling them not to eat meat will not shift the mainstream. We need to work in line with how people shop and develop messaging that appeals to mainstream consumers.

To help discover more effective ways of changing what people eat, we investigated more than a dozen examples of where consumers had shifted en masse towards more sustainable products. Learning from examples like the shift towards lower alcohol beer in the UK or a reduction in shark fin soup in China, we pinpointed effective strategies and developed a new framework called the Shift Wheel. The Shift Wheel is compromised of four complementary strategies: 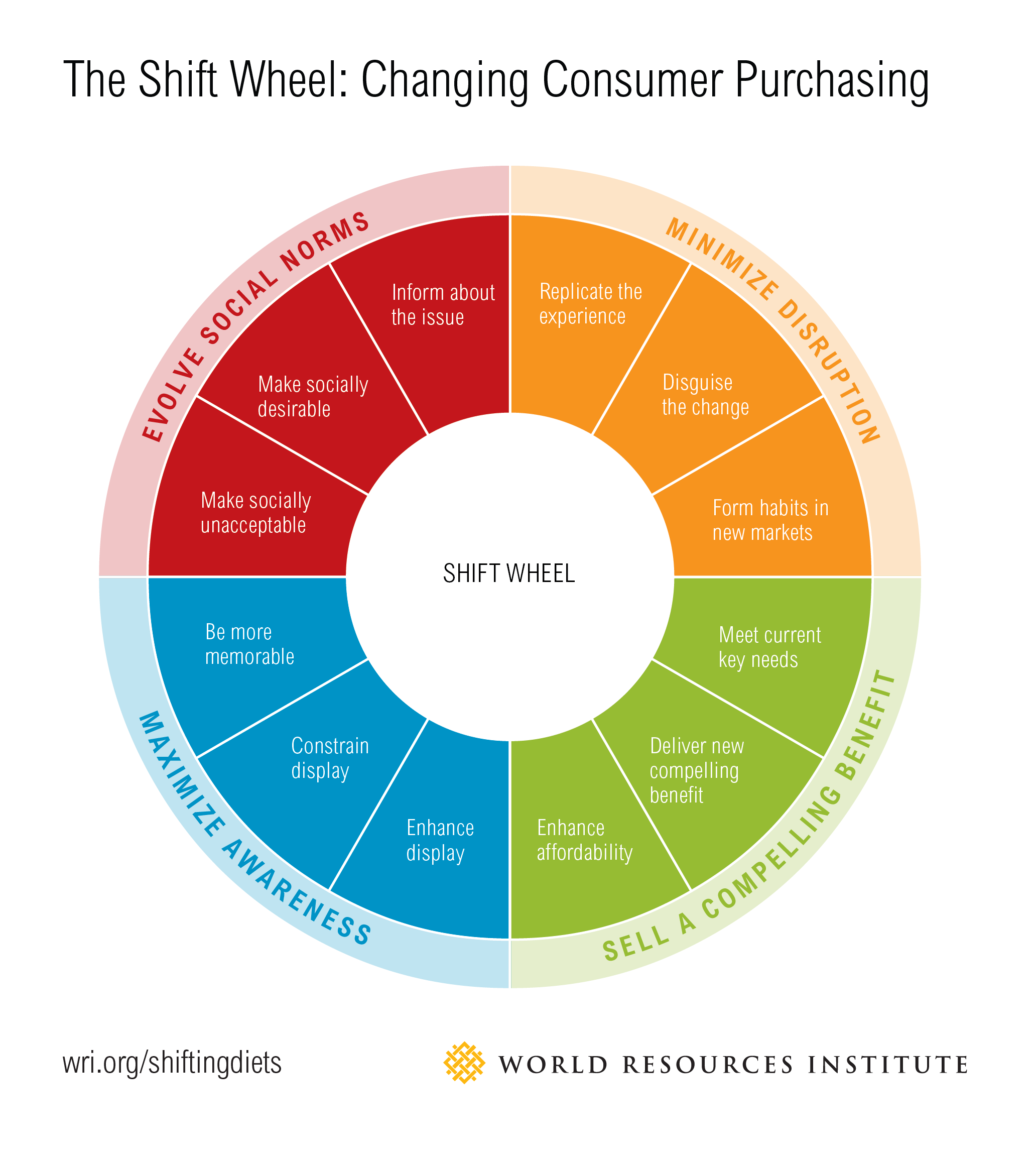 In nearly all the case studies reviewed, a shift in consumption involved multiple strategies from the Shift Wheel. Shifts also typically involved groups across a range of sectors, including manufacturers, retailers, NGOs and government agencies working in concert.

We’re now putting our learnings into action to bring about change. We’re forming a group of leading food service companies, food manufacturers and restaurant chains to figure out ways of shifting consumers towards more plant-based proteins.

The group, called the Better Buying Lab, will be launching later this year. We aim innovate new activity and campaigns that can shift a large number of consumers. If you are interested in becoming involved, contact us at bbl@wri.org. Together, we can help shift diets for a more sustainable future.