This week, Secretary of State John Kerry laid out the connection between climate change and national security at Old Dominion University in Norfolk, Virginia, home of the largest naval complex in the world. He underscored the threat climate change poses globally and, in particular, how sea level rise is being felt and seen in Hampton Roads, VA. He called for strong action at the local, national and international levels to prevent the worst impacts of climate change, including catastrophic damage to our nation’s sea shores, military installations, businesses and homes, as well as disruption worldwide resulting from agricultural and infrastructure damages, and civil unrest and mass migration.

WRI has been paying close attention to growing climate impacts affecting local communities throughout the United States. We have zeroed in on the military and community response to sea level rise issues in the Hampton Roads area, as it is a microcosm of the bigger risks and challenges facing our nation and world.

The facts are straightforward. The Hampton Roads area is home to the second-largest concentration of military capacity and activities in the United States, and its sea levels are rising twice as fast as the global average. It’s seen more than 14 inches of sea level rise since 1930, and officials estimate the city of Norfolk will need at least $1 billion in coming decades to replace damaged infrastructure and protect homes and businesses. If trends continue, the sea level around Norfolk could rise by more than seven feet or more by the end of this century, according to the Virginia Institute of Marine Science. 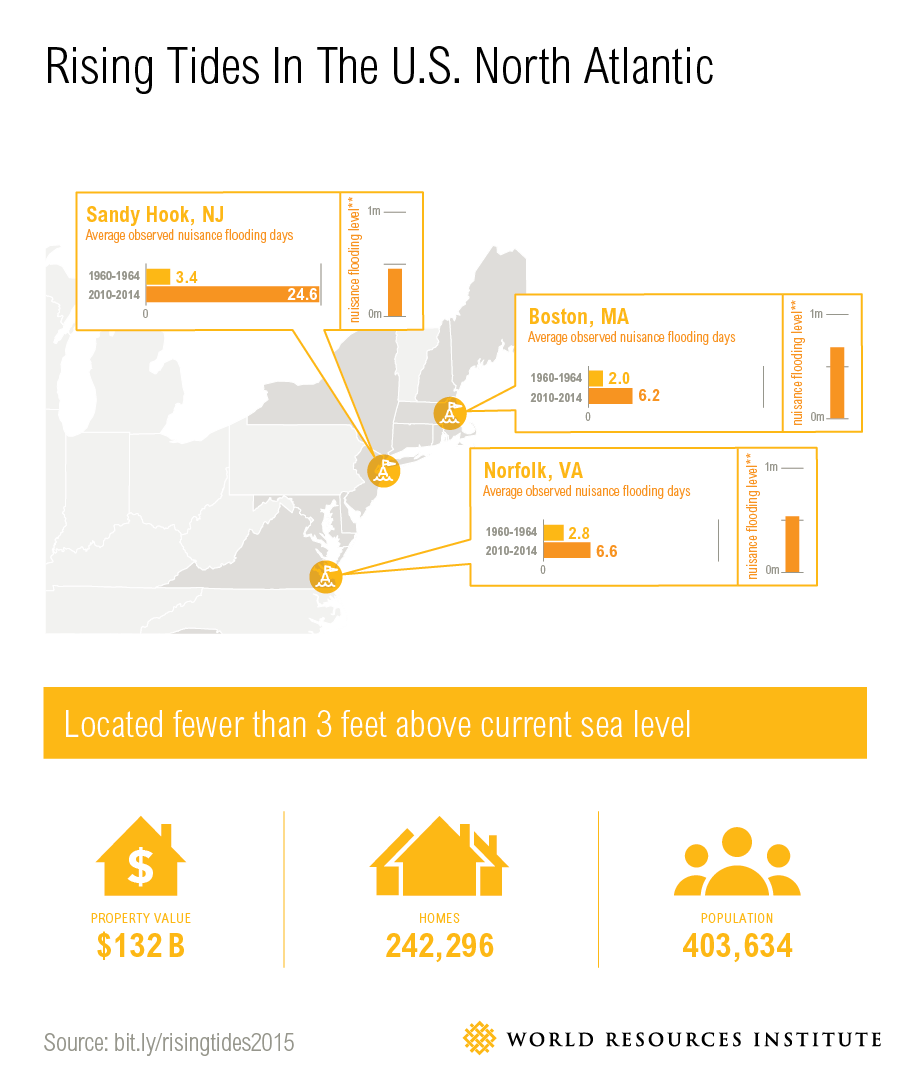 The Department of Defense recognizes that the risks extend beyond our military facilities to the roads and bridges off base that are used by military commuters, as well as the water systems, local schools, airports and other state and local infrastructure. They are working with local governments to develop a “whole of community” approach to prepare and adapt, which can serve as a model for other areas of the country facing similar challenges.

Local Communities Are at the Frontlines of Climate Change, and Climate Action

Hampton Roads is not alone. Sec. Kerry gave a number of examples of growing threats worldwide, stressing the security challenges climate change poses for our nation and the world. As a group of retired three- and four-star flag and general officers from the Army, Navy, Air Force and Marine Corps aptly put it in a recent report, “Political posturing and budgetary woes cannot be allowed to inhibit discussion and debate over what so many believe to be a salient national security concern for our nation. Time and tide wait for no one." The U.S. military is actively evaluating climate change across its planning.

When you get outside of Washington and away from the campaign-season politics, you realize that those making climate change a political fight “put us all at risk,” as Sec. Kerry said. On the local level, many mayors and other officials understand the gravity of the situation and are not engaged in this political bickering. Instead, they’re calling for more action to address the issue. In October, WRI helped organize a summitof 40 elected officials from both political parties, representing18 of 23 coastal states, to deliver the message that sea level rise is an urgent, national issue that deserves greater attention from the federal government.

The science on climate change is unequivocal, and makes it clear that we need strong national action to reduce greenhouse gas emissions to prevent the worst impacts for future generations. We also need to provide resources to communities to respond to impacts and build more resiliency. As Sec. Kerry pointed out, this is not a “take your vitamins and eat your spinach”-type of remedy. There are already significant economic opportunities, with others on the horizon, as we transition to a low-carbon economy.

Hampton Roads can’t wait and neither can the world, which is why 150 nations, representing 90 percent of global emissions, have submitted new climate action commitments ahead of COP 21 in Paris. This problem is solvable, and we know what to do. As Sec. Kerry stated, “If we don’t act with greater boldness now, it could be the single-most profound betrayal by one generation of another or of others in history.”

The connection between rising seas and U.S. security is crystal clear. Secretary Kerry’s remarks this week are a stark reminder of the stakes we face, and why we need a strong climate agreement in Paris that will reduce the risks for people at home and around the world.