As of this Monday, 174 countries had submitted their national climate plans to the UN, in preparation for the Paris climate summit that begins next week. These “Intended Nationally Determined Contributions” (INDCs) show countries are stepping up to take collective action to address climate change. Governments have set out a variety of different approaches, including specifying absolute emissions-reduction targets, setting economy-wide emissions intensity goals, outlining efforts to adapt to the impacts of climate change, and detailing specific actions they plan to take in a range of sectors including energy, forestry, agriculture and transport.

A large majority of the 132 developing countries who have submitted INDCs to date also took the opportunity to discuss their support needs in a variety of interesting ways. Here are some of the key trends and lessons for countries as they decide how to address finance in the Paris Agreement and begin implementing their INDCs in the coming years.

Of the 111 countries that mentioned support in their INDCs, more than two-thirds provided quantified finance needs. The remainder didn’t provide quantified figures, but rather included qualitative information on the support they require, such as the type of finance sought and activities it would be used for. The fact that more than three-quarters of developing countries who have submitted INDCs included support in some way illustrates the importance attached to this issue.

Many developing countries specified that some of the actions set out in their INDCs would be conditional on receiving finance. Some countries, such as Indonesia, Thailand and Colombia, made general statements that their actions would require international support, while others, including Laos, Antigua and Barbuda, Morocco, Tunisia, Ghana and Senegal, gave clear breakdowns of how much action they could take on their own, unconditionally, and how much was conditional on receiving support. The Marshall Islands, whose pledge is unconditional, made clear that they would still require international support to implement their actions. Brazil stated that its INDC is not contingent on international support, but welcomed support for action which, it noted, would generate global benefits.

WRI’s CAIT Climate Data Explorer Paris Contributions Map below classifies countries according to the conditionality of their INDCs: 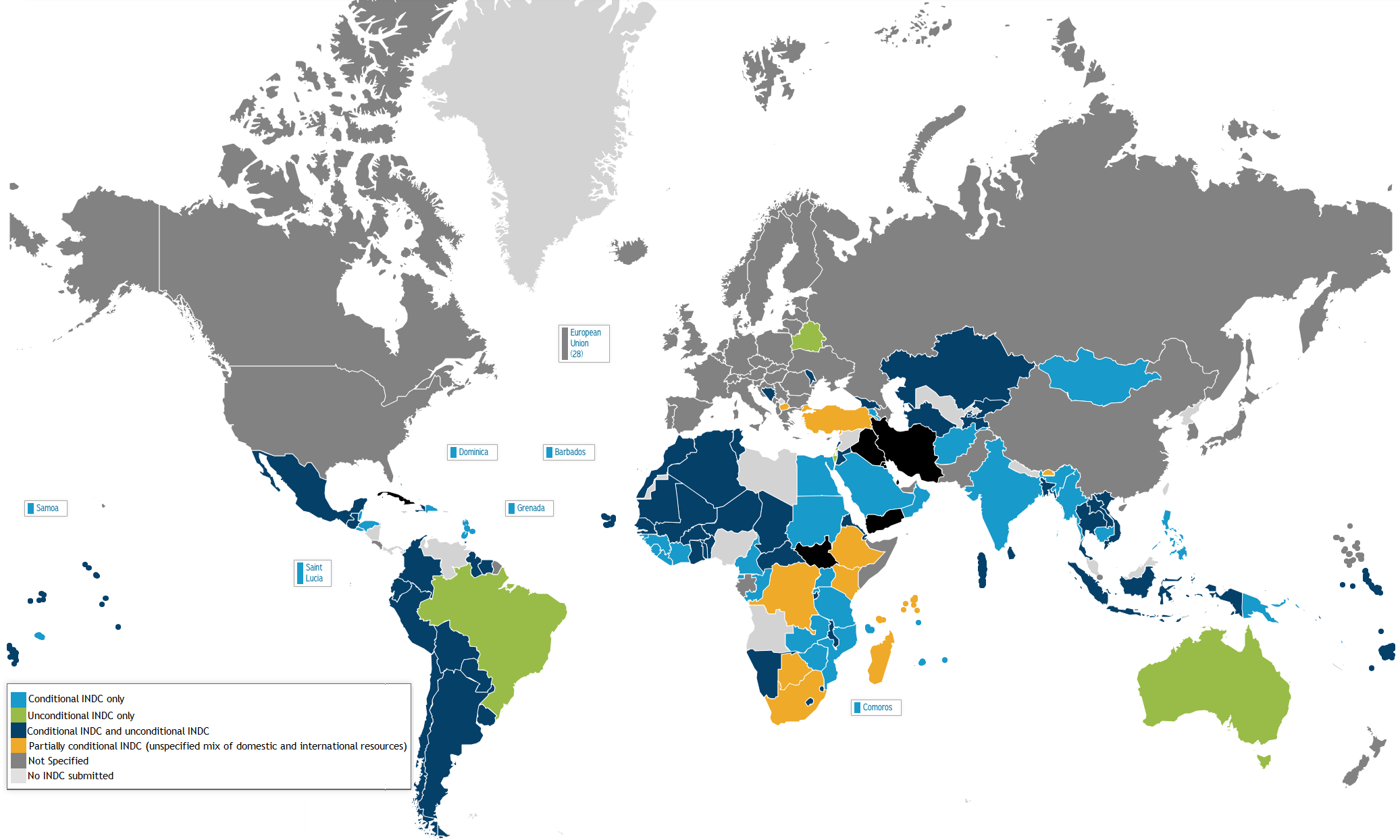 Among those countries whose INDCs include conditional and unconditional pledges, 31 countries, primarily African states, provided quantified breakdowns of how much finance they estimated would be required from international sources, and how much they would be able to raise domestically. Many other countries recognized that some funding for implementation of their plans would come from national sources. Countries including Vietnam, Macedonia, Barbados and Cape Verde also noted that they would look to private investment to finance some of the actions they set out in their INDCs. Ghana and Ivory Coast set out a comprehensive list of sources, including their national budgets, private investments, carbon markets and the Green Climate Fund. Several countries singled out the Green Climate Fund as a source they would look to for financing their INDCs, showing its growing importance in the climate finance architecture.

In developing their INDCs, governments have often built on existing climate change action plans and national frameworks. In addition to setting important economy-wide mitigation targets and adaptation goals, many countries used their INDCs to set out detailed sectoral and even project-level actions they would take, and included quantified cost breakdowns for these. Twenty-nine countries specified the breakdown between finance sought for mitigation and for adaptation. Some went even further; Ghana set out the finance required for specific policies, while Mongolia detailed investment needs at the project level.

More than one-third of developing countries who addressed finance in their INDCs emphasized that support was needed for capacity-building activities in order to attract finance from international funds and the private sector. Countries could use the activities they have identified in their INDCs as a basis for developing compelling climate investment plans and project proposals to international funders such as the Green Climate Fund.

Countries have presented finance requirements in their INDCs in a variety of different ways, as the matrix below shows. There is much work to do in analyzing the cost estimates and matching these needs with finance sources and instruments most appropriate for different contexts. However, the clear message is that countries are willing to take ambitious action to reduce emissions and build resilience to climate change, and that with further support—both public funding and private investment--they can do more. This reiterates the importance of developed countries delivering on their existing finance commitments, including the $100 billion a year goal. Beyond this, the Paris Agreement must contain effective provisions to provide support for developing countries to implement these national climate action plans, and to catalyze the shift in all investments necessary for a transformation to a low-emissions, resilient world.