In the right format and the right hands, data is more than graphs, spreadsheets and computer models: It can help reduce air pollution, halt deforestation and create new protected areas for threatened species.

That was one of the powerful messages from the recent Eye on Earth Summit, held in Abu Dhabi earlier this month. Organized by the Eye on Earth Alliance, including the Environment Agency-Abu Dhabi, United Nations Environment Programme (UNEP), Group on Earth Observations (GEO), International Union for the Conservation of Nature (IUCN) and WRI, the three-day event drew more than 650 people together to discuss how data can help inform better decisions for sustainable development.

From Data to Action

As Nick Wright, co-founder and chief product officer of Crowdicity, noted, “Every day, we create as much digital content as we did from the dawn of civilization until 2003.” Translating this vast amount of data into information and tangible results is still a struggle for scientists, government officials, business leaders and citizens. “There’s still a really big data gap,” said WRI’s Vice President of Science and Research Janet Ranganathan. “I’m not talking about the supply gap or the data divide between North and South, but the gap between data supply and data use.” 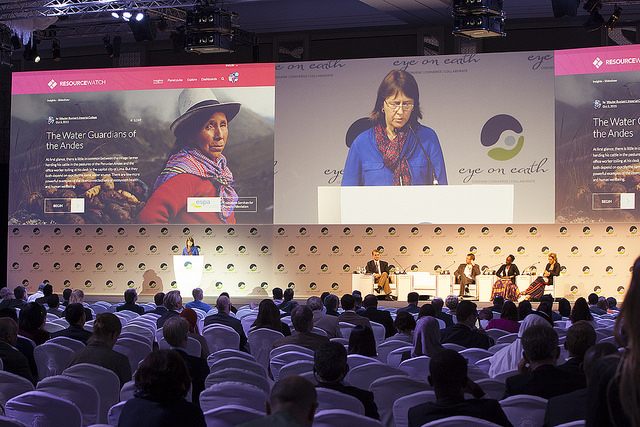 Janet Ranganathan delivers a keynote address on data visualizations at the Eye on Earth Summit. Photo by Bill Dugan/WRI

Yet stories are emerging on how data can be translated, manipulated and then used to spur environmental improvements. Three tales from the Summit stand out:

1) Cracking Down on Illegal Fishing in Kiribati:

Anote Tong, president of Kiribati, designated a large area off the Pacific island nation’s coast as a “no-take” zone to help protect fish populations. Yet how could a resource-strapped developing nation enforce this law across vast expanses of ocean that needed near-constant monitoring?

Global Fishing Watch, a free, online tool that uses satellite data to track fishing vessels around the world in near-real time, offered the answer. As Brian Sullivan of Google Earth Outreach noted, officials used Global Fishing Watch to spot a ship fishing in the area illegally, bringing this digital evidence to court. The fishing operation was forced to pay a hefty fine and showed that Kiribati does not tolerate illegal fishing in its waters.

Rio de Janeiro residents gave officials a lot of flak for their handling of the 2014 World Cup, arguing that many of the city’s planning and infrastructure investments wouldn’t yield long-term benefits for local communities. Mayor Eduardo Paes didn’t want to make the same mistake for the 2016 Olympics. So he enlisted Crowdicity, a software company. Together, they created “Agora Rio,” an online platform where citizens could weigh in on government plans and submit, review and rank ideas for Rio’s Olympic legacy. The platform generated a huge community movement, said Wright. Citizens eventually shortlisted 24 proposals to submit to Paes, who secured funding for four of them. By gathering data from the people, the mayor and his administration can now make decisions that benefit communities and prevent the kind of civic unrest that occurred during the World Cup.

The Environmental Democracy Index (EDI) charted a way forward. The open platform, developed by The Access Initiative at WRI, is the first of its kind to track and score countries on their national laws to support access to information, public participation and justice in environmental decision-making. Jamaica scored a 1.1 out of 3, taking a hit for its lack of legislation requiring public participation in decision-making processes such as EIAs.

These stories are just the beginning. We’re only starting to learn how best to turn data into meaningful action.

But the ideas are brewing. Louis Liebenberg, co-founder and executive director of CyberTracker, envisions equipping citizens in Africa with smart phones and handheld devices to track animal migrations, which can then be used to predict where Ebola outbreaks will occur. “It will be much less costly than dealing with the consequences of an epidemic,” he said.

Robbie Schingler, president and co-founder of Planet Labs, envisions a world where satellite imagery is broadly available in near-real time to monitor environmental changes and spur action. His company recently committed $60 million of imagery of certain regions so that others can develop tools for tracking and implementing the Sustainable Development Goals. Schingler also expects to announce world’s first geospatially open country soon.

These are just two of the vast number of concepts under development, and new ideas, platforms and projects crop up nearly every day. The new data revolution is underway—and it’s using information to build a better future.