Most of the discussions about climate change action focus on energy use and industry, as these sectors drive greenhouse gas emissions in the developed world. But in Latin America, climate change is largely a land use issue.

So there’s a clear solution to curbing climate change in the LAC region—restore life to its degraded landscapes.

That’s where Initiative 20x20 comes in, a new partnership between governments in Latin America, WRI, the International Center for Tropical Agriculture (CIAT), the Tropical Agricultural Research and Higher Education Center (CATIE), the International Union for the Conservation of Nature (IUCN) and private sector investors. The initiative aims to change the dynamics of land restoration in the region and initially focuses on bringing 20 million hectares of degraded land into restoration by 2020. The land will be restored partly into natural forests and partly into a “mosaic” of trees, crops, and livestock. So far, seven countries—Chile, Mexico, Guatemala, Costa Rica, Colombia, Ecuador, and Peru— and two regional programs, Bosques Modelo and Conservacion Patagonica, have already committed to restore just over 20 million hectares of degraded land, with private sector investors earmarking US$365 million to finance their efforts. 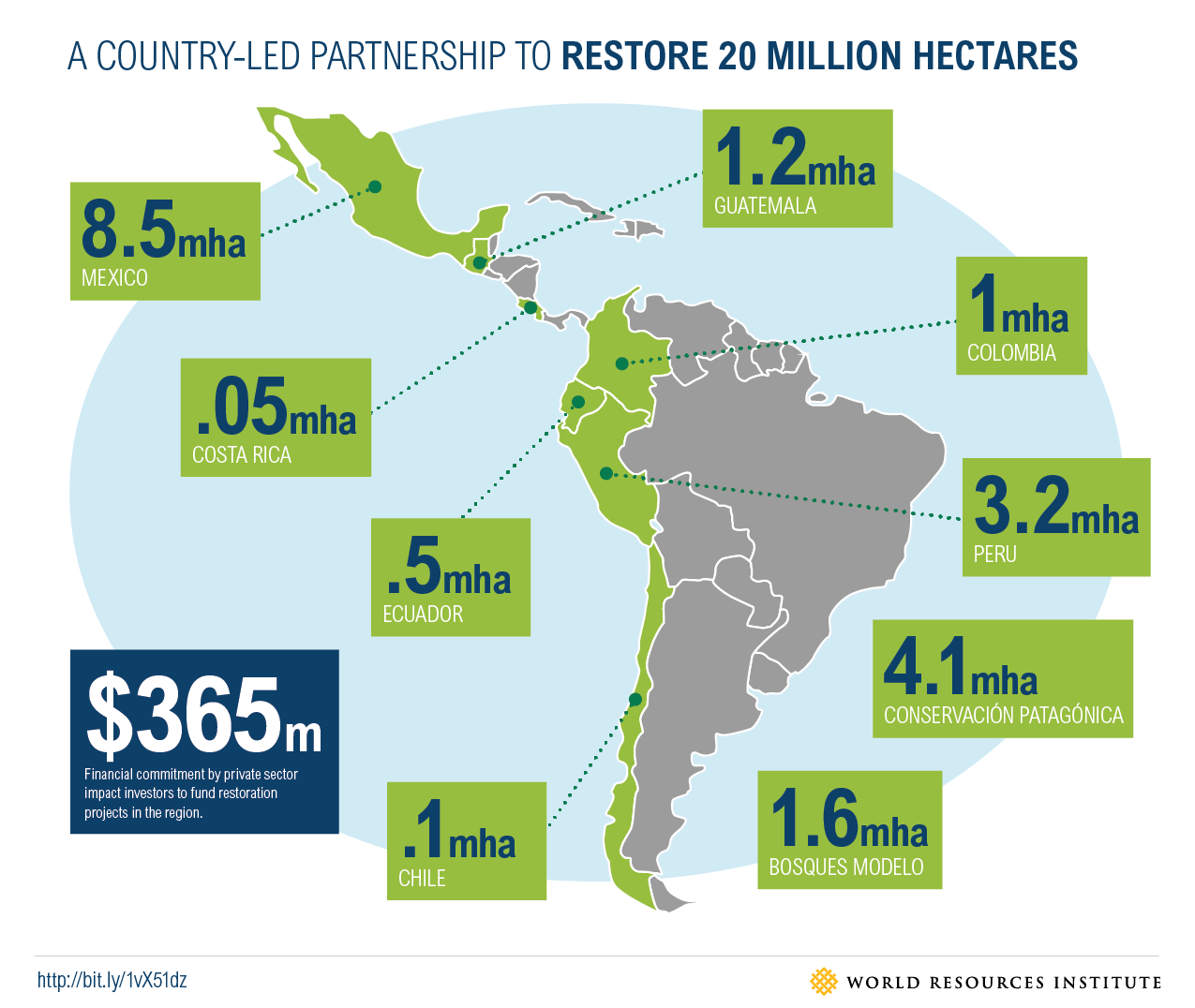 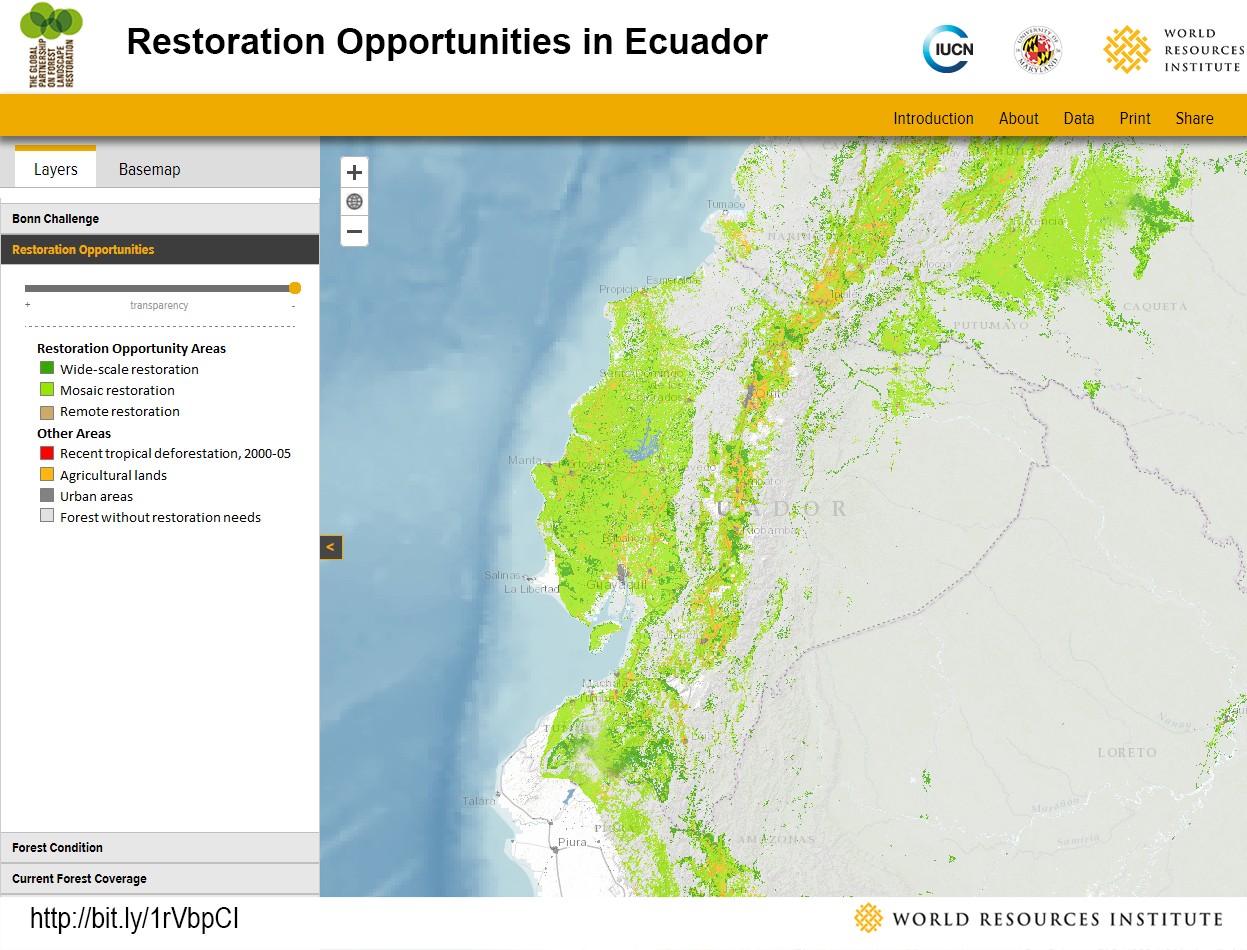 Ecuador has about 7 million hectares of degraded land with the potential to be restored, mostly to mosaic landscapes along the coast.

Ecuador is one of the first countries to join Initiative 20x20, where the Ministry of Environment created a new program to restore half a million hectares of degraded land to forests. The program, called Socio Bosque, works by providing monetary incentives to farmers to restore and protect forests on their property. The process, which will occur over many years, will sequester carbon, increase water quality, preserve biodiversity, and provide a new source of income for the landholders from the government. Although a small country, Ecuador has more than 7 million hectares of land with restoration potential, and the country could increase its domestic target following a successful Socio Bosque program. 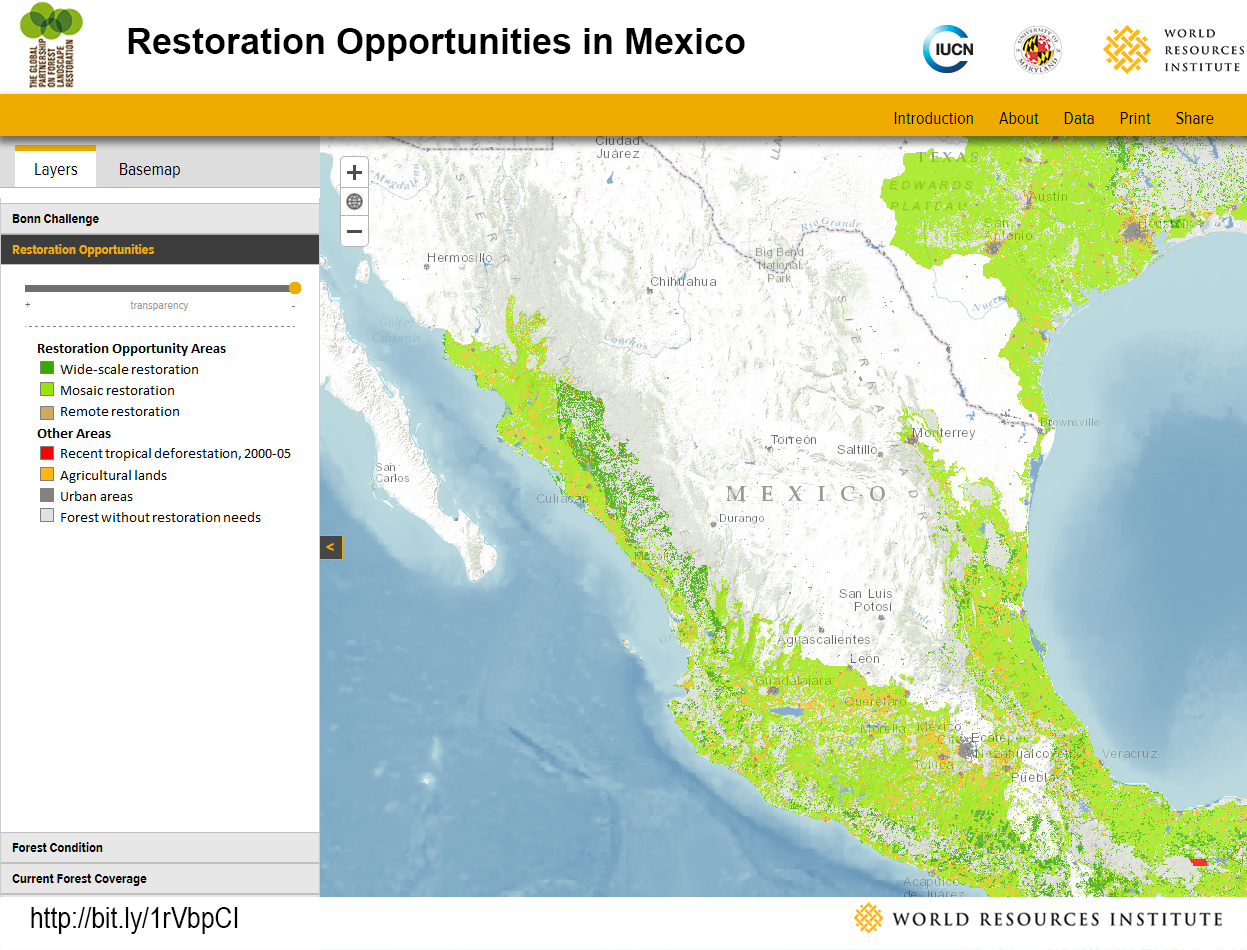 Mexico has nearly 40 million hectares of degraded land with the potential to be restored. Much of this land lies in the southern half of the country, and can be restored to a mosaic landscape.

Mexico will focus most of its 8.5 million hectare restoration goal on improving agricultural lands, many of which are degraded from intensive and unsustainable practices. These lands can be restored with a mixture of trees and sustainable agriculture, such as agroforestry or silvopasture. Agroforestry mixes trees with croplands, improving fallow and reducing erosion. Silvopasture, on the other hand, combines trees with livestock grazing lands, which increases tree cover; provides animals with shade, shelter, and forage; and ultimately increases household income for the farmers because they can sell the trees as timber or fuel wood. Mexico will have ample opportunity to continue restoring degraded landscapes after reaching its initial target, with nearly 40 million additional hectares potentially suitable for some level of restoration.

Twenty million hectares is just the beginning for restoration in Latin America and the Caribbean. This initial goal helps to establish the importance of addressing the dynamics of land degradation in the region, and hopefully, will lead to larger, more ambitious targets in coming years.