Later this week, the European Council will decide on a target to further reduce the European Union’s greenhouse gas (GHG) emissions by 2030. At issue is whether the Council will decide to reduce emissions by “at least 40 percent” from 1990 levels—leaving the door open to increase ambition in negotiation with other countries—or cap reductions at just 40 percent, locking in a lower goal and possibly influencing other countries to do the same.

The European Union currently derives about one-third of its power from natural gas, much of it imported from other countries. A new study by Ecofys under the Open Climate Network finds that by 2030, the EU can cut its natural gas consumption by almost half by cost-effectively improving energy efficiency and ramping up its use of renewable energy. This transition could boost the EU’s energy security and reduce its greenhouse gas emissions 49 percent below 1990 levels by 2030—far more than the 40 percent currently proposed.

The study found that three sectors are ripe for transitioning from natural gas to improved efficiency and renewable energy: buildings, industry, and energy supply. Consider the following: 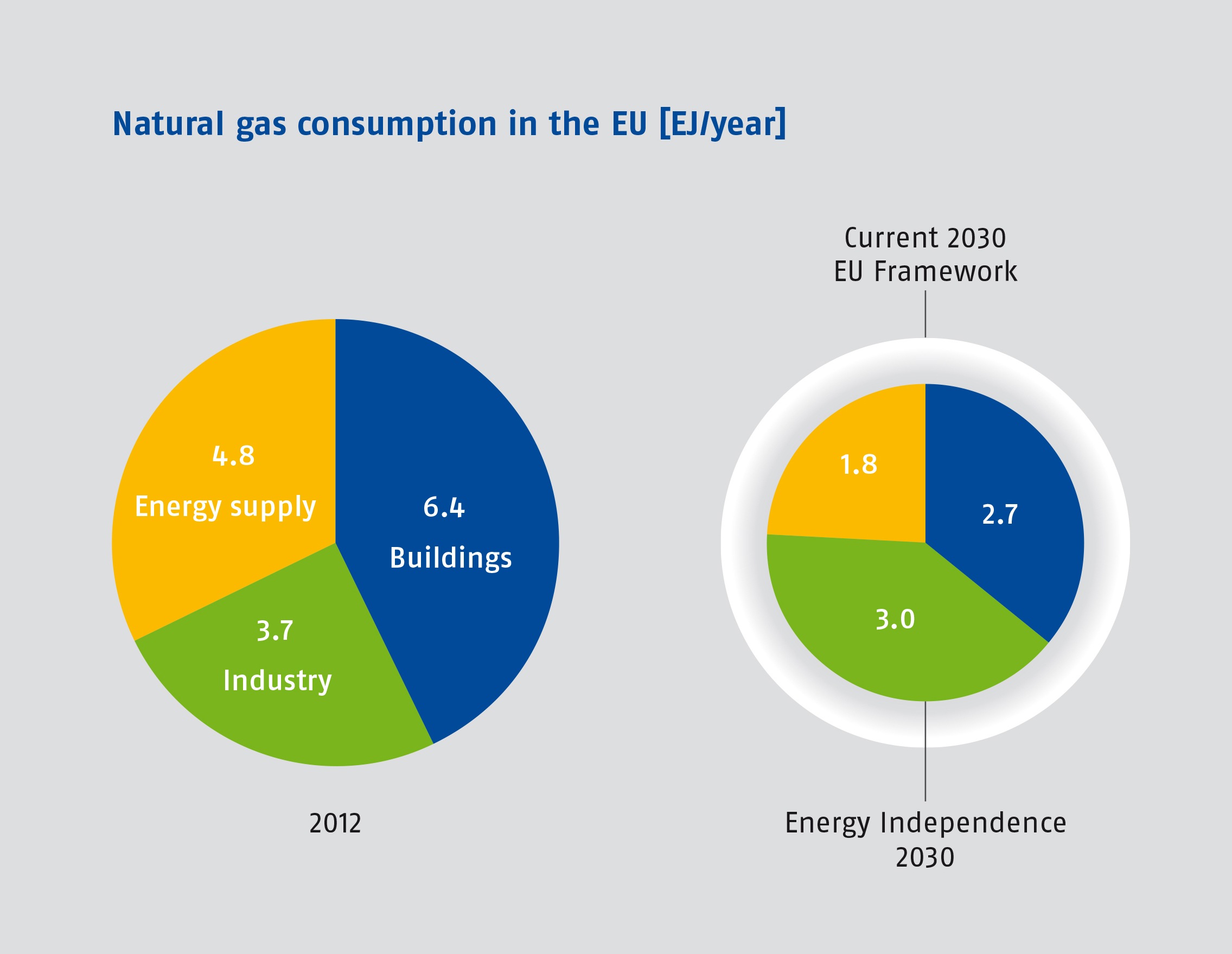 Notes and Sources: Figure shows natural gas consumption for energy use in the EU by sector in 2012 (Eurostat 2014), and the EU 2030 Framework for Climate and Energy Policies scenario (European Commission, 2014) and this study’s “Energy Independence” scenario for 2030 (Ecofys, 2014).

2 Benefits of Phasing Down Natural Gas

Many energy efficiency and clean energy measures that can help reduce gas consumption from energy supply, buildings, and industry would also reduce GHG emissions. Using these measures could achieve GHG emission reductions of 49 percent or more by 2030 relative to the 1990 level — far greater than the 40 percent reduction currently proposed by the European Commission in the 2030 Framework for Climate and Energy Policies. An emission reduction target of 49 percent relative to the 1990 level would be in line with the EU’s “fair” contribution toward limiting the global temperature increase below 2 degrees Celsius. 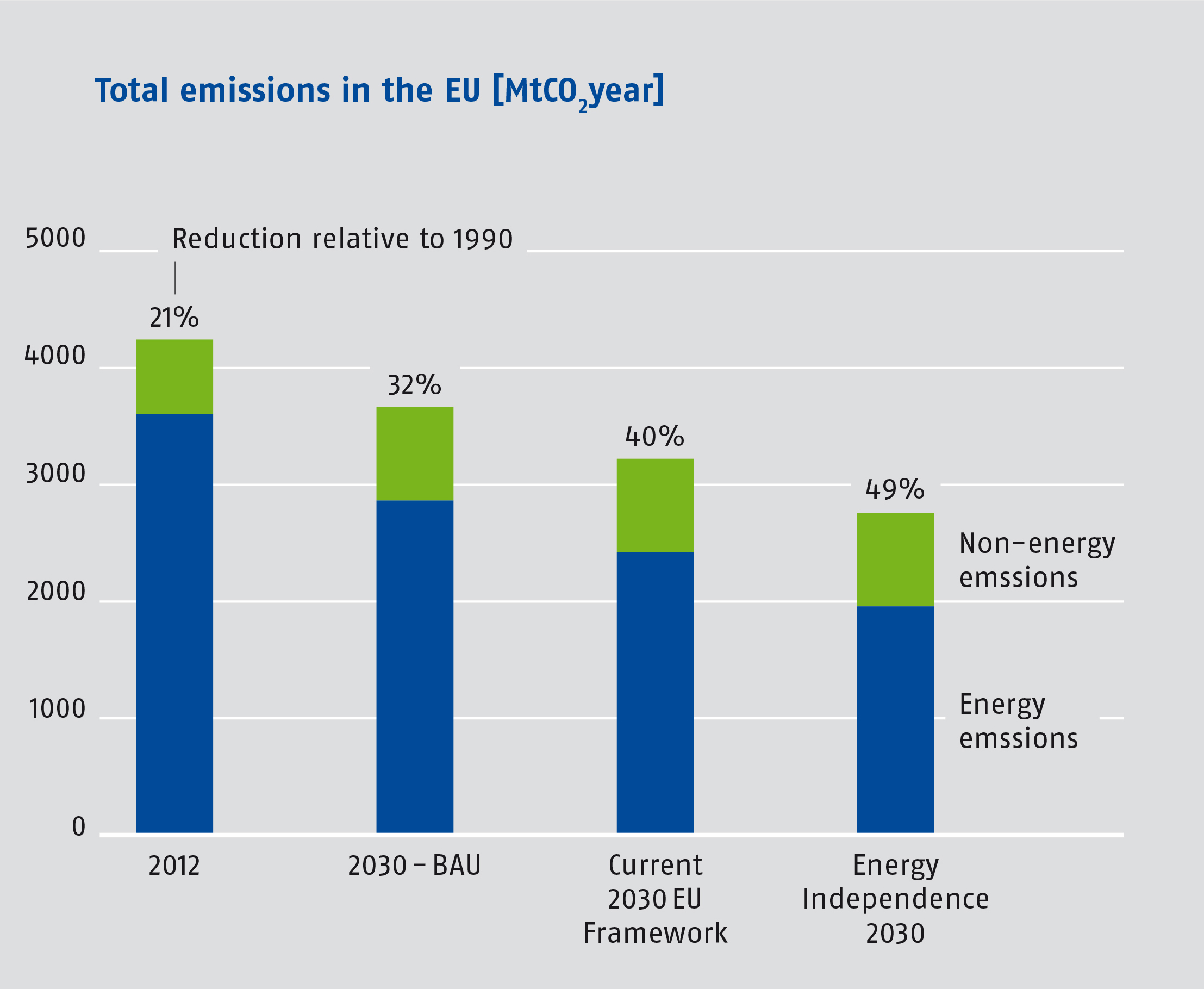 In recent decades, the EU has become increasingly dependent on natural gas imports, including from volatile countries, which has raised concerns over energy security. The EU imported 66 percent of its supply in 2012, a 21 percent increase from 1990. Energy security rose to the top of the agenda recently when Russia shut down its natural gas supply to Ukraine over pricing issues. Replacing gas imports with efficiency and renewable energy has strong potential to enhance Europe’s energy security, increasing its resilience to possible supply interruptions from political instability and other issues. While energy efficiency investments offer immediate gains, fully realizing these benefits would also require investments in new infrastructure to improve connectivity between eastern and western Europe. 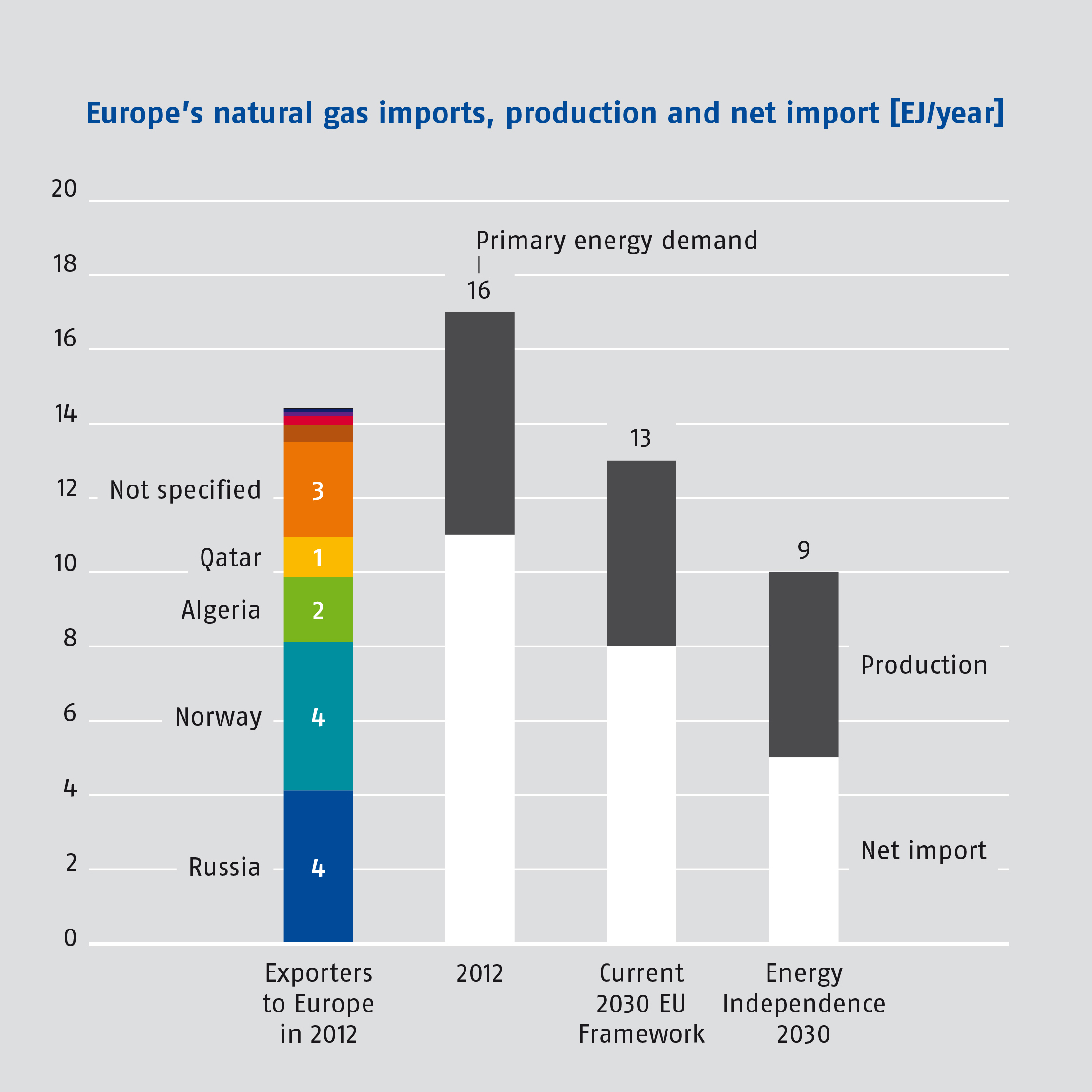 Notes and Sources: The numbers after the country names (first bar) represent the amount of importuned natural gas (EJ) from that country. In addition to historic data (Eurostat 2014), data/scenarios presented include the EU 2030 Framework for Climate and Energy Policies scenario (“Current 2030 EU Framework”; European Commission, 2014) and this study’s scenario (“Energy Independence 2030”; Ecofys, 2014).

The EU is putting forward its post-2020 emissions-reduction target earlier than most other nations and can pave the way for other countries to propose ambitious targets. The potential energy security benefits from cost-effective efficiency improvements and realistic renewable energy growth suggest that the EU itself has much to gain from a more aggressive approach. By encouraging reductions beyond the 40 percent currently proposed, the EU can drive greater climate action globally by showing that countries can cut emissions while strengthening energy security and other domestic policy priorities.