The rainforests of Africa’s Congo Basin are vast—the world’s second largest—and one of the last bastions of a once-widespread system of intact, biodiverse, and carbon-rich forests. And they are increasingly one of the most threatened. Agriculture, mining, logging, and climate change are already chipping away and thinning out the forests’ edge and interior.

The Congo Basin forests’ biggest threat, however, is unseen: a lack of good information. With poor infrastructure, government capacity challenges, and hard-to-detect patterns of change, the forests of the Congo Basin are among the most difficult in the world to monitor and manage.

That may be about to change. Starting this month, 1,500 high-resolution satellite images of the Congo Basin from the SPOT satellite constellation provided by Airbus Defence and Space are being shared with WRI, thanks to an agreement with French institutions of the Tropical Forest Spatial Observation program. It is financed by Agence Française de Développement (AFD), and coordinated by an IGN France International (IGN-FI)-led consortium of several institutes: Institut National de l’Information Géographique et Forestière (IGN), Centre National d’Etudes Spatiales (CNES), and Institut de Recherche pour le Développement (IRD).

This imagery will be provided for viewing and analysis through Global Forest Watch and Congo Basin Forest Atlases, along with other data on forest change and land management. Together, these WRI initiatives will offer one of the largest publicly-available resources for high-resolution satellite images for the Congo Basin. They can offer governments, businesses, and communities insight into how forests in the region are changing.

The Challenges of Observing Tropical Forest from the Sky

When it comes to monitoring forests, the Congo Basin remains one of the most challenging environments in the world. Much of the region remains remote with poor infrastructure, which makes wide-scale, on-the-ground monitoring difficult. Looking down on forests from space can give a view of remote areas, but the Congo Basin presents challenges here as well. Dense rainforests generate water vapor through evapotranspiration, which can mask forests in clouds and obscure a satellite’s view.

There are several options for using freely available, global satellite data, such as the MODIS (up to 250 meter resolution) and Landsat (30 meter resolution) systems, but the nature of forest change in the region can again present challenges. In the Congo Basin, research indicates that local and subsistence agriculture is the largest driver of deforestation, while charcoal production is the leading driver of forest degradation. These activities leave a smaller, more fragmented physical footprint than commercial agriculture or logging, the largest drivers in Asia and the Americas. As a result, change in the Congo Basin can be difficult to detect with medium or coarse-resolution satellite imagery, and only the sharpest images (less than a 30 meter-resolution) can give a clear picture of what is happening on the ground.

The Contribution of SPOT Satellite Images

Now, thanks to the agreement with the French institutions, this sort of high-resolution imagery will become available for the Congo Basin. The images were acquired by SPOT satellites with 10 to 20 meters resolution, have been processed to be ready-to-use, and follow the IPCC guidelines for national inventories of greenhouse gas emissions. This will allow WRI and others to compare, validate and consistently improve observations on forest cover change and FORMA alerts in the Congo Basin. The images provided so far are from the 2008 to 2012 time period, and new images, continuously being acquired, will also be made available for the coming years at a remarkable 1.5-meter resolution. 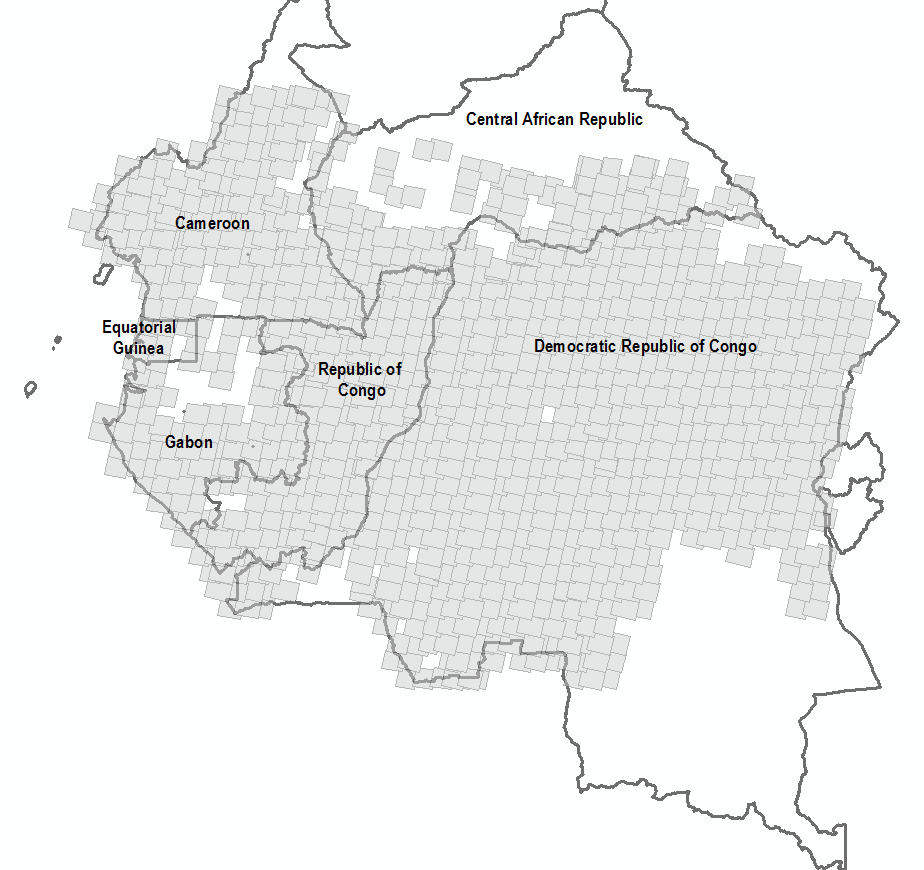 Footprint of Spot images in the Congo Basin | Source: IGN-FI

The high-resolution SPOT images will also help to refine WRI’s analysis including quantifying forest cover change and identifying whether such change is due to expansion of agricultural crops around villages, or logging activities in or outside the forest concessions. They will also provide generally better understanding of the spatial dynamics of forest areas. 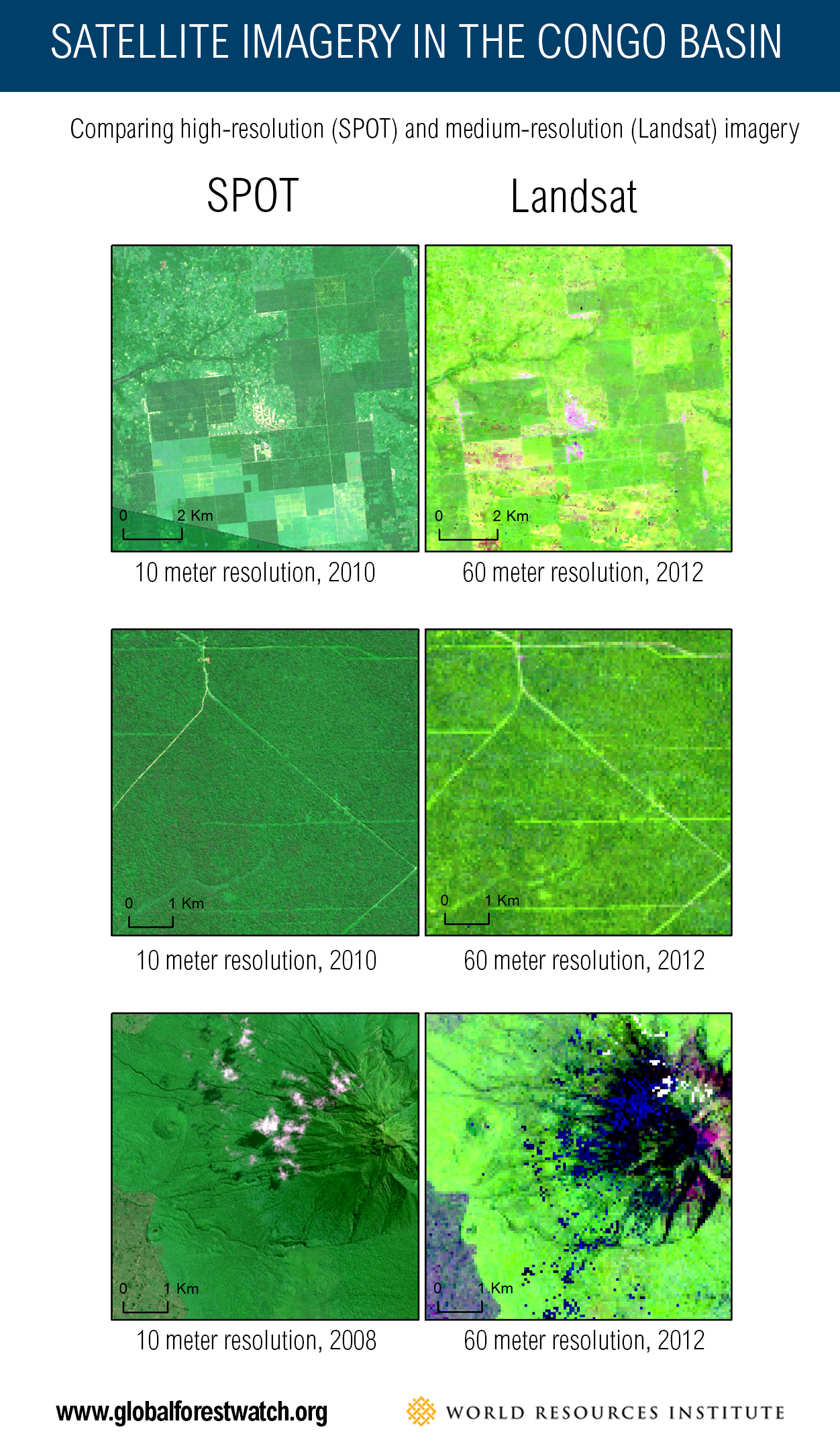 Landsat images are a composite of cloud-free Landsat 7 images, circa 2012. | Sources: SPOT, Landsat 7

The Beginning of a Meaningful Collaboration

Through the production and sharing of analyses that will emerge from this partnership, the French consortium and WRI both will share information adapted to the environmental challenges that Congo Basin countries are facing today. This action will help governments, the private sector and civil society make better decisions, based on reliable and accurate data.