The trend is clear: Regional water concerns are creating significant financial risks, thanks in large part to advanced global commodity trading and energy industries’ high dependence on water. And it’s a trend that is poised to worsen. BP projects a 36 percent increase in global energy consumption by 2030, while the Water Resources Group predicts that in the same amount of time freshwater supplies will fall 40 percent short of total demand globally.

The water–energy nexus is becoming one of the great challenges of our generation—one that also holds significant implications for political leaders and investors alike. This article explores how water risks are already impacting the world’s coal industry, and how risks will change over time. 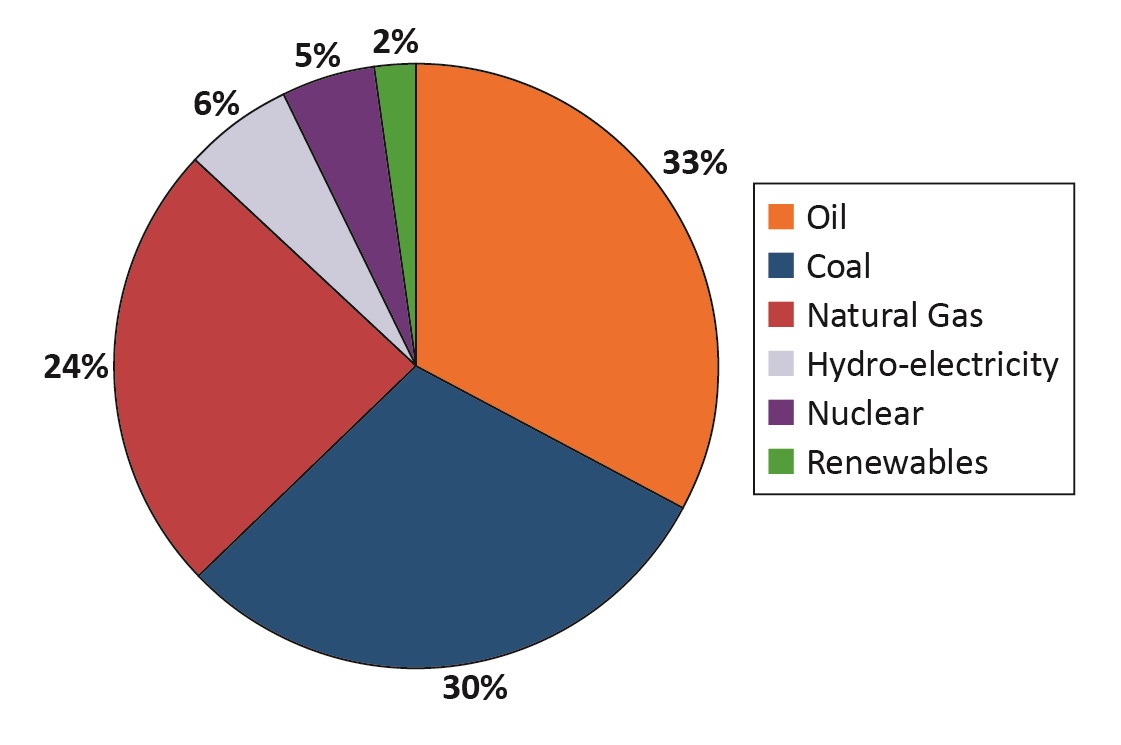 Coal continues to be a dominant force in the global energy market (Figure 1). The fossil fuel accounts for one-third of total energy consumption, second only to oil. Global coal consumption grew by 2.5 percent in 2012, continuing coal’s years-long streak as the fastest-growing fossil fuel. Many of the world’s top coal producers are also the biggest consumers (Tables 1 and 2, respectively), with China, India, and the U.S. near the top of both lists.

According to an analysis by the World Resources Institute (WRI), as of July 2012, 1199 new coal-fired power plants with a total installed capacity of more than 1400 GW have been proposed for construction in 59 countries worldwide (Figure 2). More than three-quarters of this capacity is slated for development in China and India.

As with most energy sources, coal-related industries—including mining, coal-to-chemicals, and power generation—are extremely water-intensive. Coal mines depend on water to extract, wash, and process coal, while coal-burning power plants need water to create steam and for cooling. Use varies widely at different plants depending on their generating and cooling technologies. In the U.S., for example, dry cooling, when employed, requires small amounts of water for system maintenance and cleaning. Once-through cooling systems withdraw the most water—between 20,000 gal/MWh (75.7 m3/MWh) and 50,000 gal/MWh (189.3 m3/MWh). They consumefar less—between 100 gal/MWh (0.4 m3/MWh), and 317 gal/MWh (1.2 m3/MWh). (The difference in water withdrawal and consumption is explained in the sidebar). Without effective regulatory enforcement and long-term water–resource management, water–energy choke points create uncertain financial risks to companies and investors. 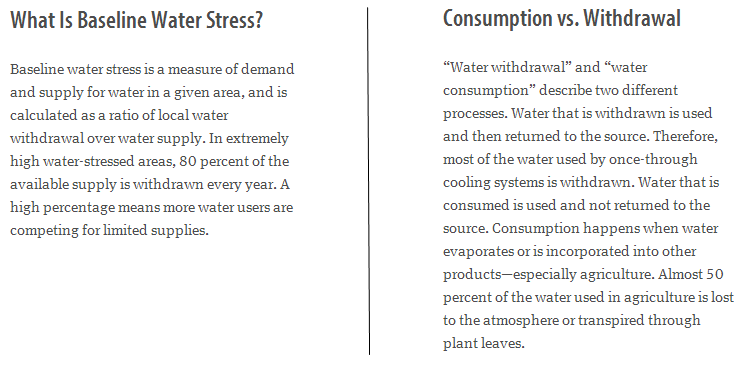 Like much of the world’s energy supply, the coal industry’s thirst is especially concerning when you consider global water trends and risk hotspots. According to WRI’s Aqueduct Water Risk Atlas, water stress—taking into account agricultural, industrial, and domestic users (Figure 3)—is growing worldwide. Baseline water stress was more prevalent and more severe in every continent in 2010 than it was in 2000, particularly in China, South and Central Asia, and the U.S. west coast. This increased stress can be attributed to a growing demand for freshwater and supply shortages caused by shifting global precipitation patterns from climate change, among other factors.7 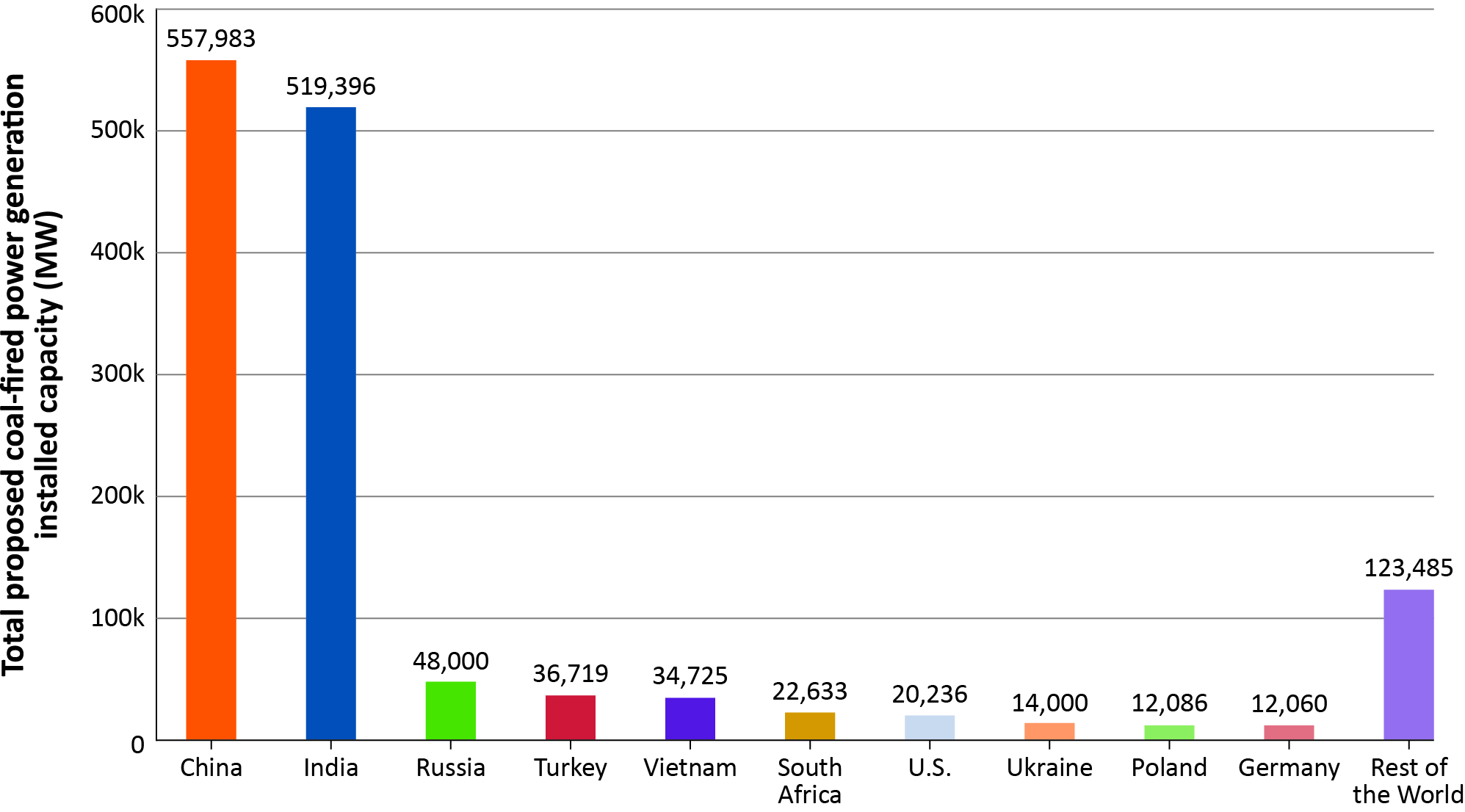 As well, more than 50 percent of the world’s largest coal-producing/consuming countries face high to extremely high levels of water stress, which can be attributed to the many competing demands on water resources. WRI developed a country-level water stress measurement that identifies where agricultural, domestic, and industrial users are withdrawing water. This is important, since water supply and demand varies significantly within a country, from dry prairies to lush rainforest and from industrial megacities to rural townships. High to extremely high stress indicates that farms, municipalities, and industries nationwide already account for at least 40 percent of the water naturally available to them, based on a weighted average. That fact can pose significant hurdles for energy producers and other water-intensive businesses. 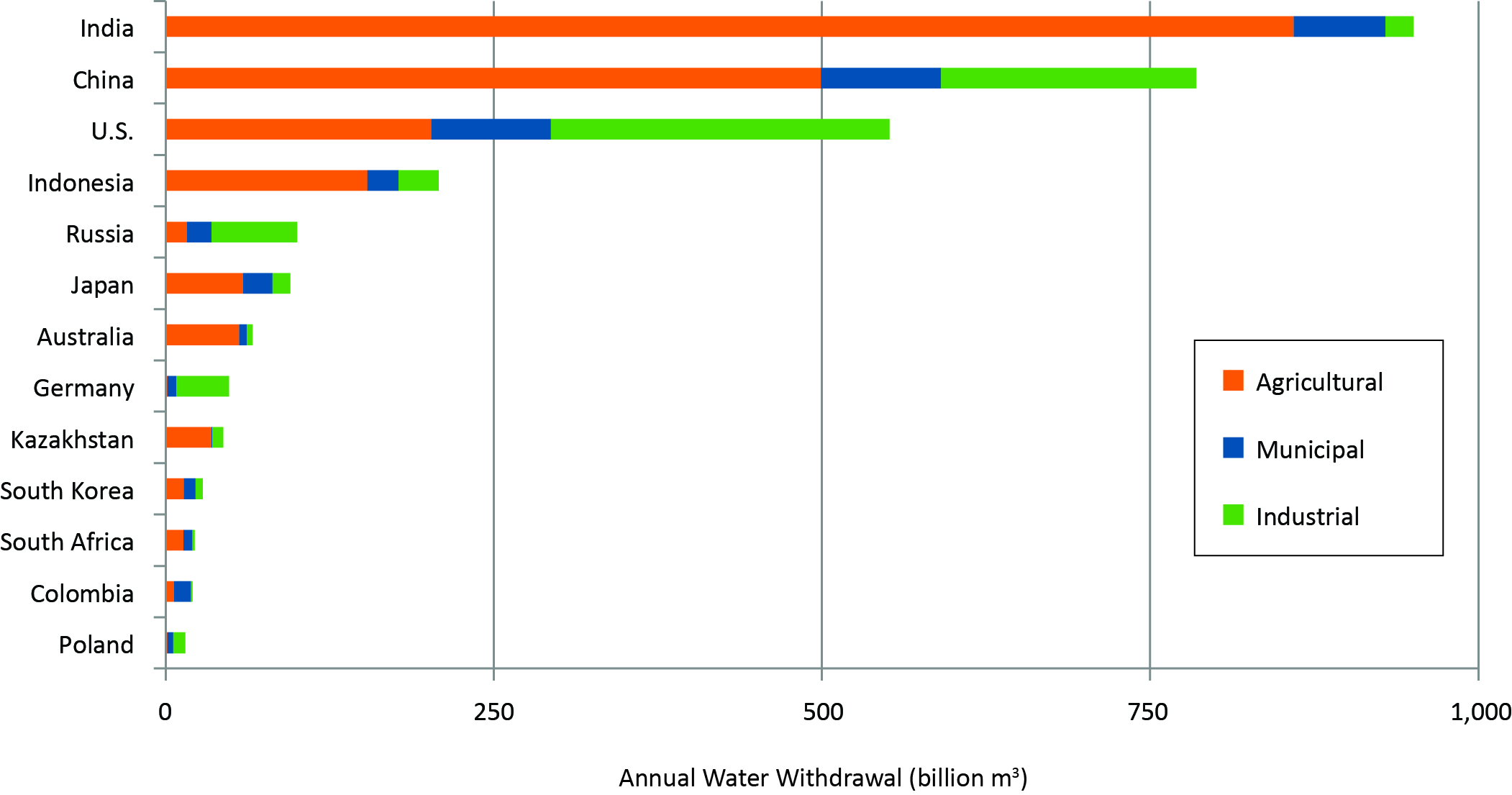 Additionally, nearly half of the seven most water-stressed countries also face high to extremely high seasonal variability (Table 3); in each of these countries, the water supply varies dramatically between wet and dry seasons within a year. That volatility can disrupt operations and increase production costs. For example, a drought in Texas in 2011 placed exceptional stress on the power grid, and the state only avoided blackouts by placing restrictions on farmers and ranchers with senior water rights, showing the tension on the water resources from the competing demands of primarily agriculture and energy.

Water stress is not limited to geographically dry countries. Indonesia, South Korea, and Japan—all coal producers/users—are classified as highly water-stressed because they use more than the annually available surface freshwater supply for city, agricultural, and industrial development. Because naturally occurring, renewable freshwater cannot meet these countries’ needs, their cities are heavily dependent on costly alternative water sources, such as groundwater, seawater desalination, and inter-basin transfers. The more dependent an area is on alternative freshwater sources, the higher the water-related risks to its financial assets.

These risks can be wide-ranging, as Société Générale outlined in an October 2013 report.1 The report found that limited access to water-supply sources can disrupt operations. Cutting water-allocation permits due to insufficient water in an area can delay project development. Securing new water sources is often an expensive process, increasing project costs. Possible up-front investments—which can reduce those long-term costs—include efficiency, recycling, and wastewater treatment to meet regulatory requirements meant to protect stressed resources. Companies could avoid all those issues with sufficient naturally occurring supplies. However, as demand exceeds renewable supplies, alternative sources and all their associated issues come to the forefront. 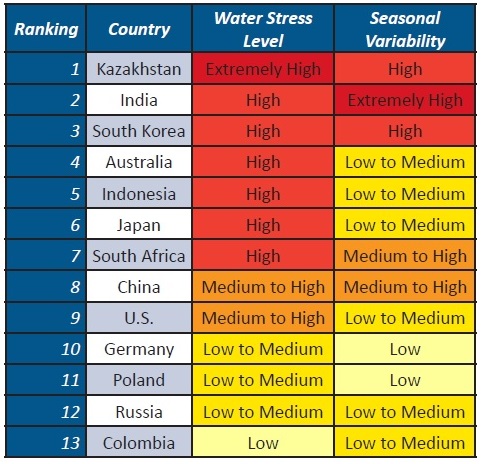 Given that China is the world’s largest coal producer and consumer—accounting for more than half of the planet’s coal consumption—it is worth exploring that country’s specific water– energy risks in greater depth. China’s total installed coal-fired power generation capacity at the end of 2012 was 758 GW, more than 66 percent of the nation’s total power generation capacity .

However, China is also quite dry. Its average water resources are only 1730 m3/yr per capita, barely above the United Nations’ water scarcity marker. Eight provinces have fewer than 500 m3/yr per capita of total available surface water, which is on par with Middle Eastern countries such as Jordan or Syria.

More importantly, there’s a geographical mismatch between the country’s water resources and its coal reserves. While water is generally much more abundant in southern China, two-thirds of China’s coal mines are located in the water-stressed north. According to a recent Wood Mackenzie report, 58 percent of China’s existing coal-fired power generation capacity is located in high to extremely high water-stress areas, where local water demands are high and water resources face strong competition among users in the industrial, agricultural, and domestic sectors.

WRI’s study found that, as of July 2012, the Chinese government had planned another 363 coal-fired power plants for construction across China. Those plants’ combined generating capacity would exceed 557 GW. This amounts to an almost 75 percent increase in the nation’s total power-generating capacity, 50 percent of which is located in areas with high to extremely high water stress. More than 60 percent of the proposed generating capacity is slated for six northern provinces, which account for only 5 percent of China’s total water resources.

If China builds all the plants now in the planning stages, China’s coal industry—including mining, chemical production, and power generation (not including the water withdrawal for once-through cooling systems)—could withdraw as much as 10 billion m3 of water annually by 2015. That’s more than one-quarter of the water available for withdrawal every year from the Yellow River. We believe water withdrawal is as important as water consumption because, while water that is withdrawn does return to the ecosystem, it is still not always available for all other users. These water withdrawal and consumption estimates assume no policy changes or technology improvements, so actual usage rates could be lower.

The power plant sites were selected because they are located next to coal mines, a proximity which would reduce coal transportation costs. The proposed sites would, however, exacerbate the industry’s environmental impacts on already stressed water resources.

The Chinese government recognizes the need to balance its water and energy consumption. The Ministry of Water Resources recently announced a new policy document called the “Water Allocation Plan for the Development of Coal Bases,” aimed at protecting water resources in large coal bases. The plan specifies water use efficiency and discharge requirements for existing coal bases and requires all new coal mines to submit a water resources planning study.

In the face of highly stressed water resources, coal mining and power generation industries in China could see increased production costs in the short term as it could be more expensive to access alternative water supplies, address ongoing regulatory changes, and guard against potential disruptions. To mitigate these risks, China should pair water risk management at its power plants with consistent, carefully crafted legislation like the Water Allocation Plan. Such measures may require up-front investment, but any such expenditure will support sustainable water management and long-term business continuity.

Financial Risks Associated With the Water–Coal Nexus In India

Already one of the world’s top coal consumers, India’s dependence on coal-fired power generation is expected to grow. The country proposed nearly 520 GW of new coal-fired capacity nationwide as of July 2012 to meet high growth in electricity demand.

While shareholders are usually not financially exposed to water-related risks, as they are shielded by protective regulations enabled by India’s state-owned power sector, water risks may become more material under certain circumstances. Unregulated plants, for instance, might not be able to pass costs on to end-users, reduced power outputs could violate the terms of the purchase agreements, or the regulatory framework could change. Any changes would fall against the backdrop of the Government of India’s National Water Mission. The national policy framework calls for a 20 percent improvement in water efficiency nationally through regulatory mechanisms. It also encourages conservation and water waste minimization. Every water user, industrial power generators included, will need to optimize their conservation, recycling, and reuse practices to meet this goal.

The case studies from China and India illustrate that unmanaged water risks have financial consequences for national and international companies. Recent guidelines from China’s Ministry of Water Resources will limit coal expansion based on regional water capacity, and may slow down coal-project approvals. The guidelines will also push companies to pay for wastewater recycling and wastewater treatment systems. That large capital investment, combined with higher annual operating costs, means that companies must take a long-term view. They should pursue advanced water risk management at power plants while understanding the value in consistent, carefully crafted legislation. The combination will ensure that energy production can grow within natural resource limits.

Considering the potential for increased regulatory uncertainty and likelihood of supply constraints, water poses a variety of business risks for the global coal industry. The World Resources Institute recommends that the industry assess water risks more deliberately and broadly, hold itself accountable, and take actions to respond to the challenges. A range of actions is available, including innovative technology and public policy engagement to collectively reduce shared water risks, all on the path to advanced water stewardship.

Furthermore, governments around the world should protect water resources and encourage energy projects that face fewer risks from water stress and limits on greenhouse gas emissions. Those cautionary measures will better align policymaking with water and energy planning, and balance resource constraints with economic growth.