The world’s 100 most-populated river basins are indispensable resources for billions of people, companies, farms, and ecosystems. But many of these river basins are also increasingly at risk. As water demand from irrigated agriculture, industrialization, and domestic users explodes, major rivers on several continents are becoming so depleted that they sometimes fail to reach their ocean destinations. Add climate change, nutrient and chemical pollution, and physical alterations like dams and other infrastructure development to the mix and it’s clear that many communities rely on water resources that face an increasingly risky future.

WRI’s Aqueduct project recently evaluated, mapped, and scored stresses on water supplies in the 100 river basins with the highest populations, 100 largest river basins, and 180 nations. We found that 18 river basins— flowing through countries with a collective $US 27 trillion in GDP —face “extremely high” levels of baseline water stress. This means that more than 80 percent of the water naturally available to agricultural, domestic, and industrial users is withdrawn annually—leaving businesses, farms, and communities vulnerable to scarcity.

Periodic, and often serious, droughts only make the situation worse. Stressed river basins can severely threaten regional water security and economic growth, and may even contribute to political instability—especially if a basin does not have adequate water-management plans in place. 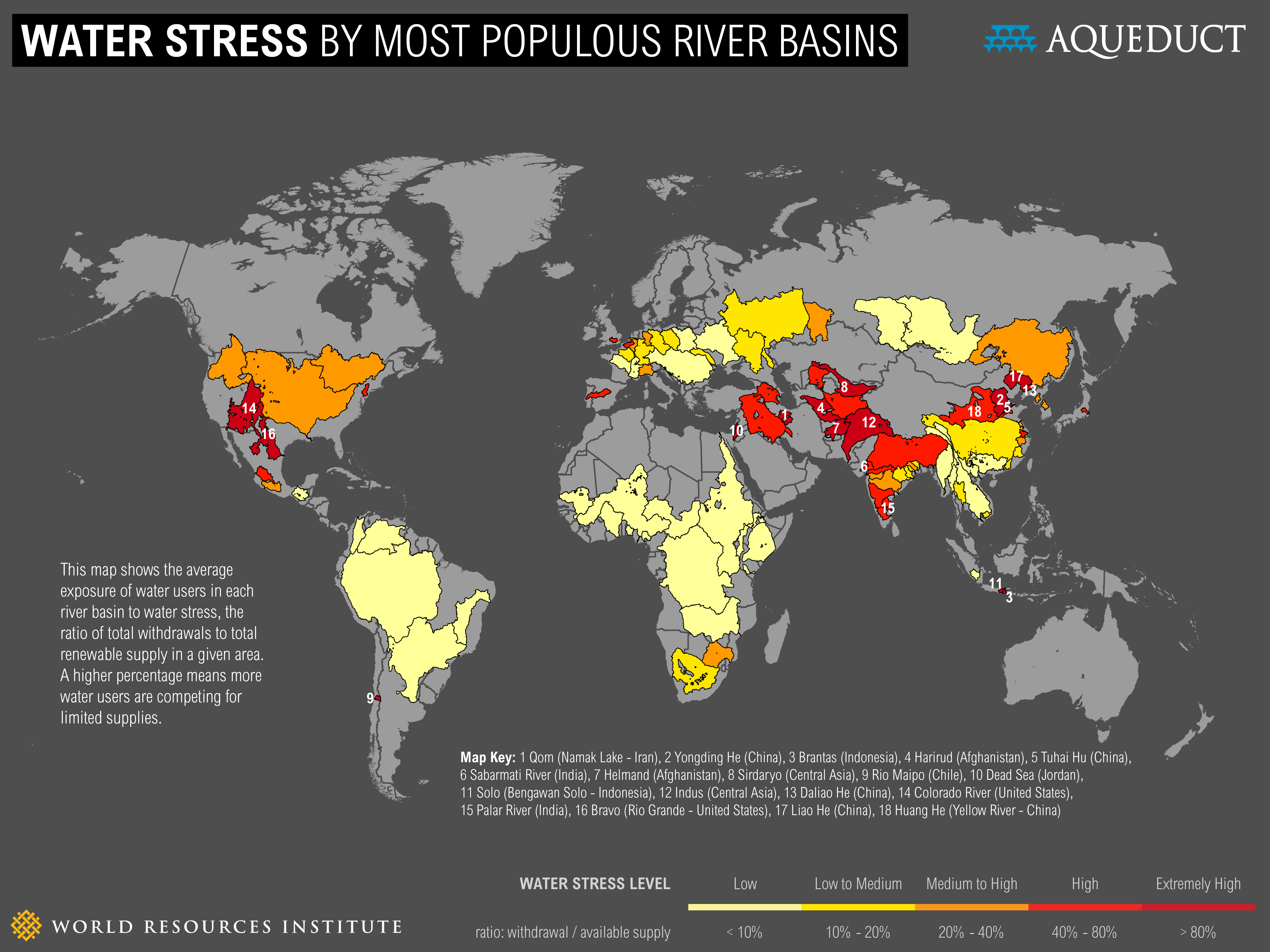 Decision-makers in many of world’s water-stressed basins have attempted to put management plans in place—with mixed results. The United States’ Colorado River is a prime example of a plan that, while well-intentioned, may ultimately be unsustainable. Starting in Colorado and running 1,400 miles to the Gulf of California, the Colorado River is the 14th most stressed among the world’s most populated river basins, and the sixth most stressed if ranked by size. More than 30 million people depend on it for water. The seven states receiving its water comprised 19 percent of the United States’ total GDP in 2010.

Because of its naturally arid setting—and due to its large and growing number of users and resulting high level of baseline water stress—the Colorado has become one of the most physically and legally managed rivers in the world. It is also under serious duress, exacerbated by a decades-long drought. This imbalance between supply and demand means that the river often runs dry before it reaches the Pacific Ocean—posing significant problems for wildlife, ecosystems, and communities that depend on it.

The Colorado River is an example of a basin where natural water stress is already severe. The complex web of infrastructure and governance structures around the river was, in a sense, created to ensure predictable, steady water supplies in a stressed region. On the other hand, that same development has driven increasing demands for limited supplies. Aqueduct’s country and river basin rankings deliberately do not include the effects of such extensive management, instead focusing on objective measures of underlying hydrological conditions. But the overall picture is clear: Even the most-established, iron-clad management systems start to crumble under increasing scarcity and stress.

Our interactive map and working paper share the average exposure to five of water-quantity risk indicators for all major river basins and countries worldwide. These indicators include:

While each river basin in the world faces unique challenges, Aqueduct’s stress scores and rankings provide a valuable common foundation for stakeholders to manage water-related risks.

Standardized scores help all stakeholders—from governments to development banks to civil society organizations—understand the nature of water security challenges and their potential social, economic, and environmental effects. This information is vital for making better, high-level decisions about where and how to begin to respond to river basin-level risks.

For companies, standardized scores inform better decisions about responding to basin-level hazards. Sustainability managers or operations supervisors know they are comparing each of their facilities in different basins around the world to the same standard. Investors benefit similarly, as they are able to more accurately compare water risks among their portfolio companies.

As the world marks another World Water Day, we must become more knowledgeable about the water security threats we face. River basin-level water risk data is a key tool in moving toward a water-secure future. 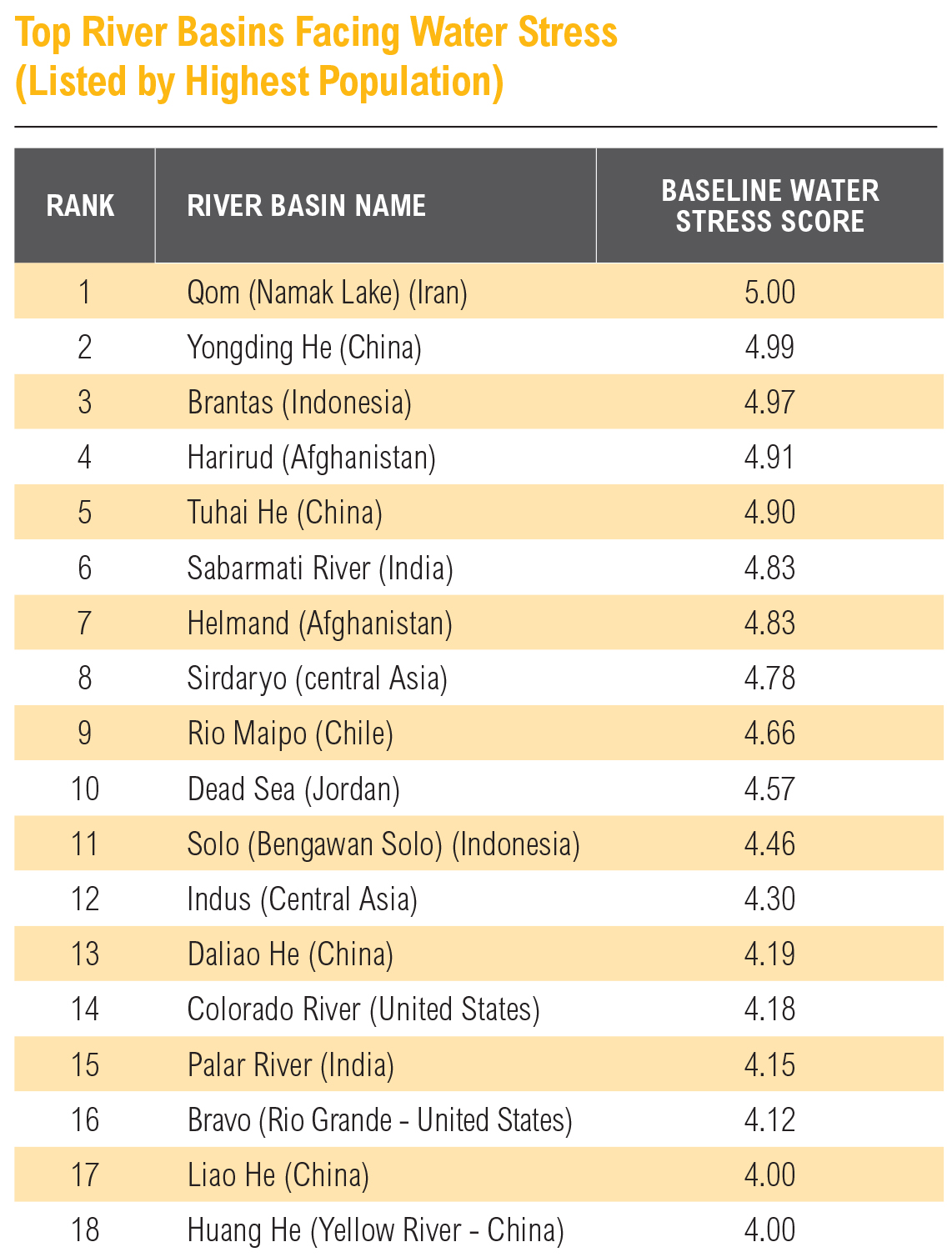