This piece was co-written with Tara Schmidt, a senior analyst at Wood Mackenzie.

Energy runs on water. In fact, among industries, the global energy sector is the world’s largest water user. Almost all forms of energy production and power generation depend upon water for their operations. This tension causes stress in both the energy and water worlds. Three-quarters of energy respondents to a 2012 CDP Global Water Survey confirmed that they experienced water-related operational risks, while half experienced water-related detrimental business impacts in the past five years.

Read on for more detailed insights and WRI’s key takeaways. 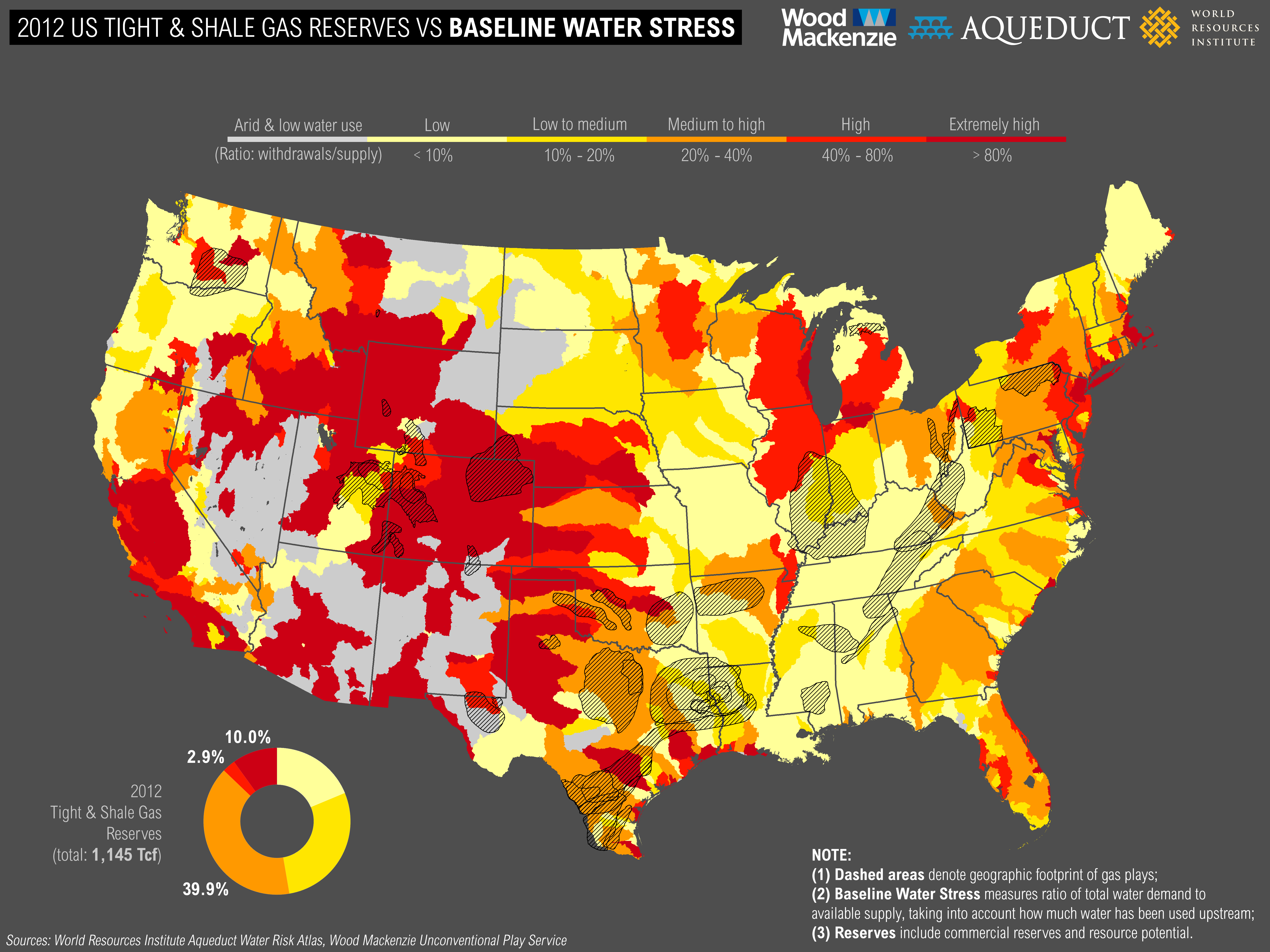 In the United States, more than 50 percent of reserves of shale and tight gas—gas trapped in especially hard, non-permeable rock—are located in areas of medium to extremely high baseline water stress. Water users in these areas, highlighted in on the map above, already face high levels of competition for the same supplies. Shale and tight gas drillers use a small percentage of water compared to other industrial users in the United States, but individual wells need large volumes of water during short periods of time for hydraulic fracturing. These short but intense demands add up and can threaten to displace other water users. Over time, freshwater availability in shale development areas could decline as demand from homes and farms starts competing with hydraulic fracturing operations.

These concerns extend beyond the United States, too. In the 10 countries with the largest shale and tight gas reserves, 60 percent of the reserves are located in in areas facing medium to extremely high baseline water stress. Energy companies operating in these high-demand and limited-supply areas will likely see pollution and competition-related stress increase in the coming years.

Some energy firms have already started planning risk-mitigation strategies to account for potential scarcity, even though they are costly. Antero Resources Inc. plans to spend more than $500 million dollars on an 80-mile pipeline, just to secure water supply for its shale development. Unless all stakeholders work together to protect shared water resources, risks will steadily increase. 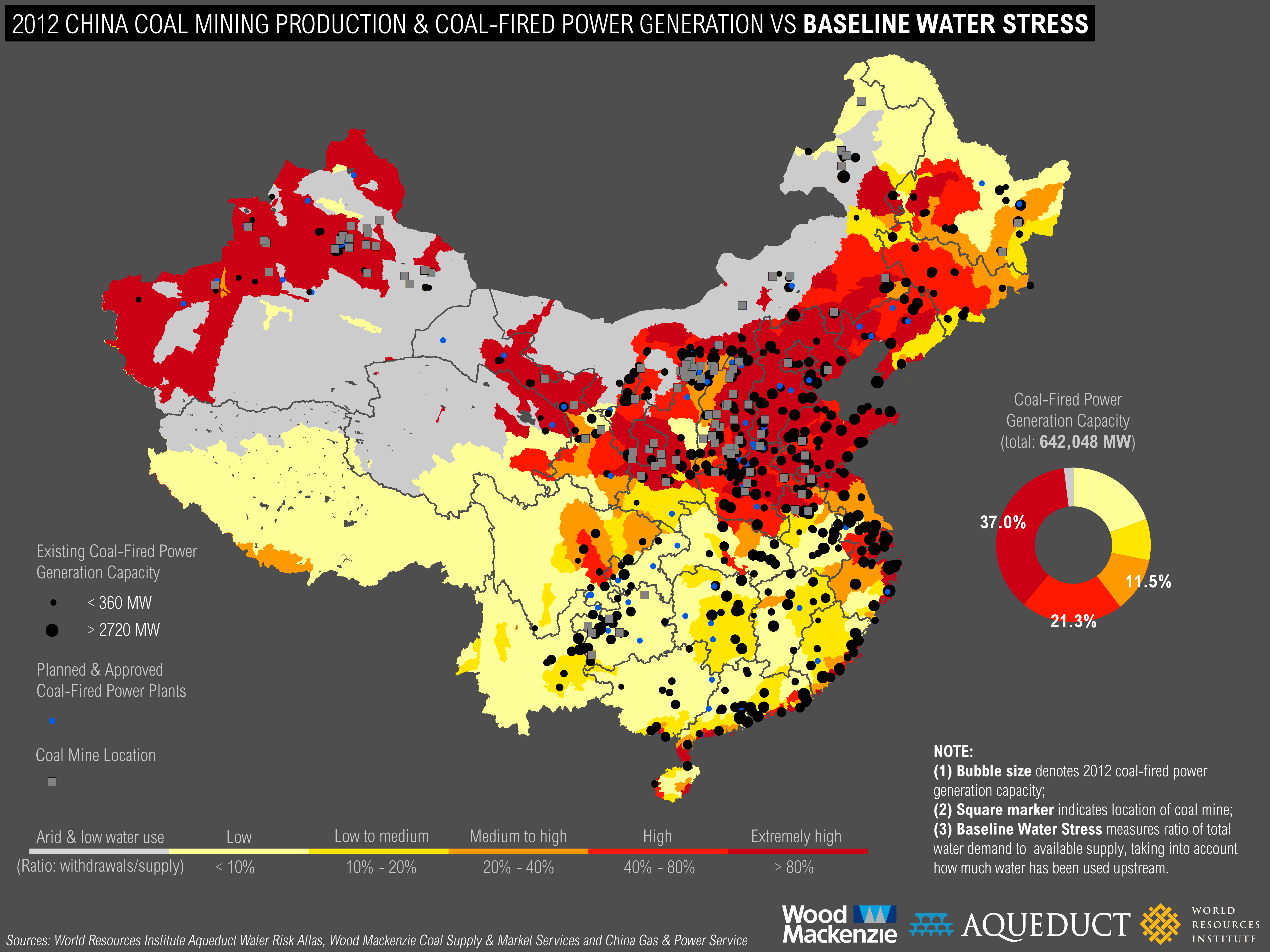 Oil from the Desert 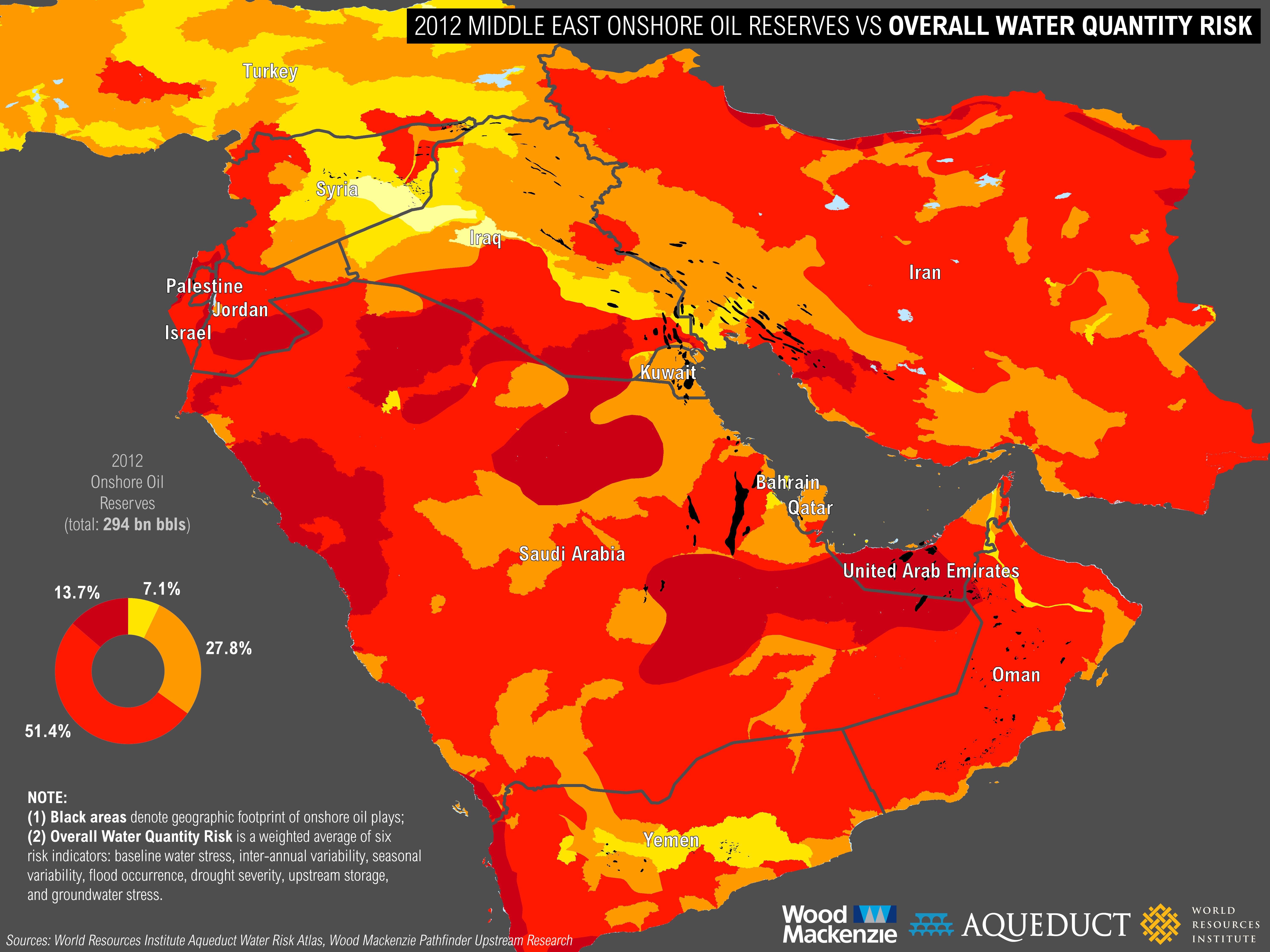 What Is Overall Water Quantity Risk?

Oil production in the Middle East faces a variety of water risks, as the region is one of the world’s most arid. It should come as no surprise that nearly 93 percent of the Middle East’s onshore oil reserves are exposed to medium to extremely high overall water quantity risk (see sidebar).

In addition to these supply concerns, energy companies in the Middle East face two primary water risks. First, inadequate desalination or other water infrastructure can disrupt ongoing projects, delaying oil drilling, production, and processing extraction and production. Second, domestic desalination consumes oil resources that would have been exported to customers around the world. In Saudi Arabia, for example, oil is sold to power and desalination plants at around $4 a barrel, but can be exported at around $100 a barrel.

Time to Reverse the Trend

Water poses a variety of business risks for the energy industry, especially as water supplies become more scarce. Solutions exist, however. With the right technology, transparency, and engagement, water risks can be effectively managed. Companies can successfully mitigate their water risks by better understanding their own water needs, identifying their specific water-driven business risks, and developing clear water management strategies. The future of energy production depends on all stakeholders working together to ensure a water-secure future.