Borneo’s lowland rainforests are one of the most biodiverse regions on earth, home to unique habitats, thousands of species of plants, and animals like Proboscis monkeys, Sumatran rhinoceroses, and orangutans. Yet more than 75 percent of its forests have been destroyed in recent decades. “Now it looks like something out of Lord of the Rings, due to hardwood harvesting and huge palm oil estates,” said Mattias Klum, a National Geographic photographer and co-author of the book, The Human Quest: Prospering within Planetary Boundaries. “We’re taking one of the richest ecosystems in the world and making it into a monocrop.”

Borneo is not alone in its transformation. According to Klum and Johan Rockström, director of the Stockholm Resilience Centre (SRC) and co-author of The Human Quest, societies are degrading the world’s ecosystems at unsustainable rates. “We’re hitting the ceiling of Earth’s capacity to support the modern world,” said Rockström.

Rockström and Klum recently shared these insights at an event hosted by the World Resources Institute, SRC, and the Swedish Embassy. Around 80 people attended the discussion, which took place at the House of Sweden in Washington, D.C.

Welcome to the Anthropocene

Rockström and Klum believe that humans have become such a force of planetary change that we’ve now entered a new geological age, the “Anthropocene.” In fact, in many cases we’re close to exceeding our “planetary boundaries,” the levels of change the earth can withstand before we experience potentially catastrophic implications. As the Earth’s population races toward 9 billion people, we need to find ways to stay within our planet’s safe operating spaces—or “boundaries”—on climate change, ozone depletion, ocean acidification, the rate of biodiversity loss, land use change, freshwater use, interference with nutrient cycles, chemical pollution, and aerosol loading. Exceed these boundaries and nature—the foundation of economic and human well-being—can turn from friend to foe.

Rockström provided the example of Arctic sea ice. Polar regions benefit the world by acting as giant, cooling mirrors, reflecting 95 percent of the sun’s heat back into space. But when white ice sheets melt, the darker surface water fails to reflect the heat. The same regions that provided cooling benefits now trap heat, increase temperatures, and set the stage for dangerous environmental changes. “We need stable polar regions for our own economic growth and stability,” said Rockström. “We need collaborative efforts to be stewards of at least the nine planetary boundaries.” 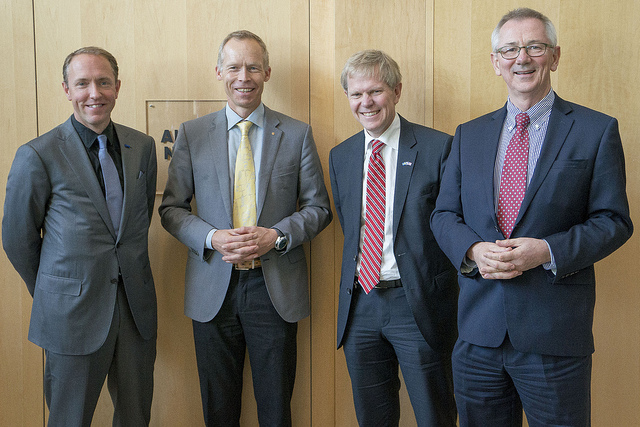 While Rockström’s research and Klum’s photographs paint a startling picture, all speakers agreed that there is still time to shift direction. Importantly, many of these actions will not only prevent more collapse, but also generate economic benefits.

Steer pointed to three strategies that advance economic development by sustainably managing the world’s ecosystems and natural resources, including:

Transformative solutions begin with good data. For example, we know that roughly one-quarter of the food (as measured by calories) that the world produces is ultimately lost or wasted. Saving and utilizing this food could go a long way toward enhancing food security, promoting economic development, and reducing agriculture’s impact on the environment. To that end, WRI recently announced a new project to develop a Global Food Loss and Waste Protocol, a standardized methodology to help companies and countries measure and manage their food loss and waste.

Countless opportunities exist that benefit both the economy and the environment. Take degraded lands: According to Steer, these lands—which no longer support productive forests or agriculture—are “bad for the economy, bad for people, and dreadful for the environment.” Yet there are 2 billion hectares where, with the right investments, land can be restored—either as forests or as agricultural fields. Restoring these lands into productivity can prevent pristine ecosystems--like Borneo’s lowland rainforests—from being wiped out by agriculture. “If we were to get political momentum for ‘re-greening’ degraded lands, it would be great for the economy, for poverty alleviation, and for ecology,” said Steer.

Creative, forward-thinking policies can induce the technological changes we need to live within our planetary boundaries. Steer pointed to the sharp decline in solar photovoltaics in recent years. A combination of national policies—like renewable energy targets and investment in R&D—and market forces have encouraged the development of wind and solar energy production. As the technology has evolved, solar prices have dropped, helping spread this technology and offering consumers a low-cost energy option. These policies can also drive economic opportunities—a “win-win” for society and the environment.

Similarly, some countries are expanding investment in clean energy and experimenting with policies to rein in emissions. “Why do you think China is introducing a cap-and-trade on carbon dioxide?” asked Steer. “It’s not because they have to. They’re doing it this year because they think it will promote technological change and they think they will gain economically as a result.”

The bottom line is that environment and economy do not operate in their own silos. As experts at the event noted, the global economy is inextricably linked to Earth’s ecosystems, processes, and natural resources. “Nature isn’t something we just ethically protect,” said Rockström. “It makes sense to protect it for our own well-being.”