This post was co-written with Ryna Yiyun Cui. It originally appeared on ChinaFAQs.org.

Last month, China’s State Council announced a new action plan to combat air pollution, which included a prohibition of new coal-fired power plants in the three most important metropolitan areas around Beijing, Shanghai, and Guangzhou (known as the “key-three city clusters”).This followed a previous announcement of a $275 billion investment by the central government in improving air quality. The action plan aims to tackle the increasingly severe air pollution problem in China, which is largely caused by its massive consumption of coal.

In addition to banning new coal-fired plants in the key three city clusters, the plan included ambitious targets to reduce particulates. These pollutants are major health concerns, and are prevalent throughout much of China.

But while the plan sounds like progress, will it actually slow down China’s new coal construction? A bit of analysis suggests that it may take more action to really curb China’s appetite for coal.

A Look at China’s Current and Proposed Coal Use

With its rapid economic development in recent years, China has been expanding coal power generation capacity at an astonishing speed for the past decade (see graph below). It is worth noting that this period of rapid expansion followed a period of relatively slow growth in new coal-fired capacity. The action plan marks the first time the Chinese government has introduced a ban on new coal-fired plants. 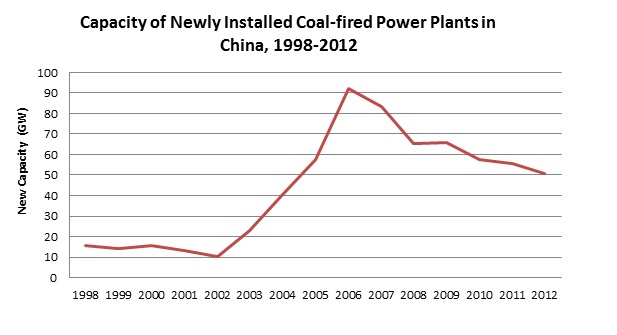 The regions covered by the ban currently account for about 28 percent of China’s coal consumption.1 According to 2012 estimates, China had 363 proposed coal-fired power projects in the pipeline, with a total capacity of 557,938MW.

Fifteen of these proposed projects (see table below) are located in the key-three city clusters and could be affected by the new action plan. These plants represent only 5 percent of the total proposed capacity of China’s new coal-fired plants.

In addition, the action plan may affect more coal plants than just those that fall within the three-key city clusters. The action plan also calls for imposing emissions standards on new coal-fired power plants proposed for development in 10 other quickly developing regions.4 This stipulation may considerably reduce the economic attractiveness of certain proposed projects, and thus indirectly slow down development of new coal power plants in these areas. We estimate that 48 projects, or about 13 percent of the total proposed national capacity, could be affected by the special standards.

However, most of China’s coal development is moving westwards to less developed regions. The graphs below show that current coal consumption is strong in northern provinces (left), and the geographic distribution of proposed coal power projects (right) indicates a further growth of coal consumption in the northwestern provinces. Most of these regions are not covered by the action plan, and more than 80 percent of the proposed projects in the 2012 pipeline are currently exempt from the ban and special standards.

Of course, methods of reducing China’s coal consumption aren’t limited to this new action plan. China’s air pollution is a problem that receives significant public awareness and social pressure—particularly in cities. China also has national-level goals for curbing energy consumption and coal use, and it’s experimenting with various policies to reduce carbon emissions, such as pilot carbon markets. Coal also faces various other challenges in China, including weakening demand. But as the global leader in coal consumption, truly reducing China’s coal use will take significant efforts—at the local, regional, and national levels. The newly announced action plan makes some progress. Shifting to a development path that safeguards the environment and human health, though, will require additional nation-wide measures.