As the U.S. Environmental Protection Agency (EPA) moves forward with standards to reduce power plant emissions—which are due to be finalized in June 2015—many states are wondering how they will comply. WRI’s fact sheet series, Power Sector Opportunities for Reducing Carbon Dioxide Emissions, examines the policies and pathways various states can use to cost-effectively meet or even exceed future power plant emissions standards. This post explores these opportunities in North Carolina. Read about additional analyses in this series.

Like all U.S. states, North Carolina will need to reduce its power sector CO2 emissions in order to alleviate the impacts of climate change and comply with future EPA standards. New WRI analysis shows that the state is already in a strong position to meet—and potentially even exceed—these forthcoming power plant emissions standards.

Until the early 1990s, the vast majority of North Carolina’s new power capacity was coal- and nuclear fired. In the last two decades, natural gas has comprised the bulk of new capacity additions, with some renewable capacity coming online during the past several years.

Between 2005 and 2011, coal-fired generation decreased by 24 percent, due to a drop in electricity demand and a slight change in the fuel mix, including increased use of natural gas. Over the same time period, state power sector CO2 emissions dropped 17 percent. While this trend is likely to continue in the short-term as some of North Carolina’s aging coal plants retire, CO2 emissions are projected to slowly increase back to 2011 levels by the late 2020s. Coal still represents around 50 percent of total generation, while nuclear and natural gas sources constitute 34 percent and 9 percent of total generation.

As we discussed in a blog post last month, states may have considerable flexibility in how they comply with the EPA’s future power plant emissions standards. EPA could allow states to pursue a range of CO2 reduction opportunities—including greater use of existing lower-carbon power plants, increased use of renewables, and energy efficiency, among other strategies. Our analysis found that North Carolina could use the following tools to reduce its power sector CO2 emissions:

North Carolina could achieve even greater long-term emissions reductions (69 percent below 2011 levels by 2030) by expanding the state’s existing policies and programs. While this expansion would likely require new legislation, it could help curb climate change and save the state’s customers money over time.

For example, a recent study found that while North Carolina’s renewable target will not have a considerable impact on electricity rates for customers through 2026, after that, clean energy use would lead to $173 million in cost savings. Continuing the same rate of renewable sales beyond the REPS target of 2021 would reduce CO2 emissions by an additional 7 percent by 2030.

While North Carolina’s REPS program does not require a minimum level of energy efficiency each year, the state could establish such a goal. Analysis by ACEEE shows that the economic benefits of energy efficiency programs in North Carolina could outweigh the costs, with the potential to save customers almost $16 billion from 2010 through 2025. If North Carolina enacts new legislation that requires annual electricity savings of 2 percent per year below business-as-usual projections from 2015 through 2030, it can reduce power sector CO2 emissions by about 40 percent by 2030.

North Carolina Can Build Off Progress Made To Date

North Carolina is in a strong position to reduce its power sector emissions, but it’s important that the state focuses on climate action both in the short-term and the long-term. There have been recent proposals to repeal the state’s REPS plan. Doing so would limit growth of renewable energy and efficiency, making it more difficult to meet forthcoming power plant emissions standards.

In the decades to come, North Carolina has an opportunity to reduce its emissions even more than what EPA standards will likely call for. This long-term vision is not only imperative for safeguarding communities from climate change’s dangerous impacts, but for creating significant economic benefits. 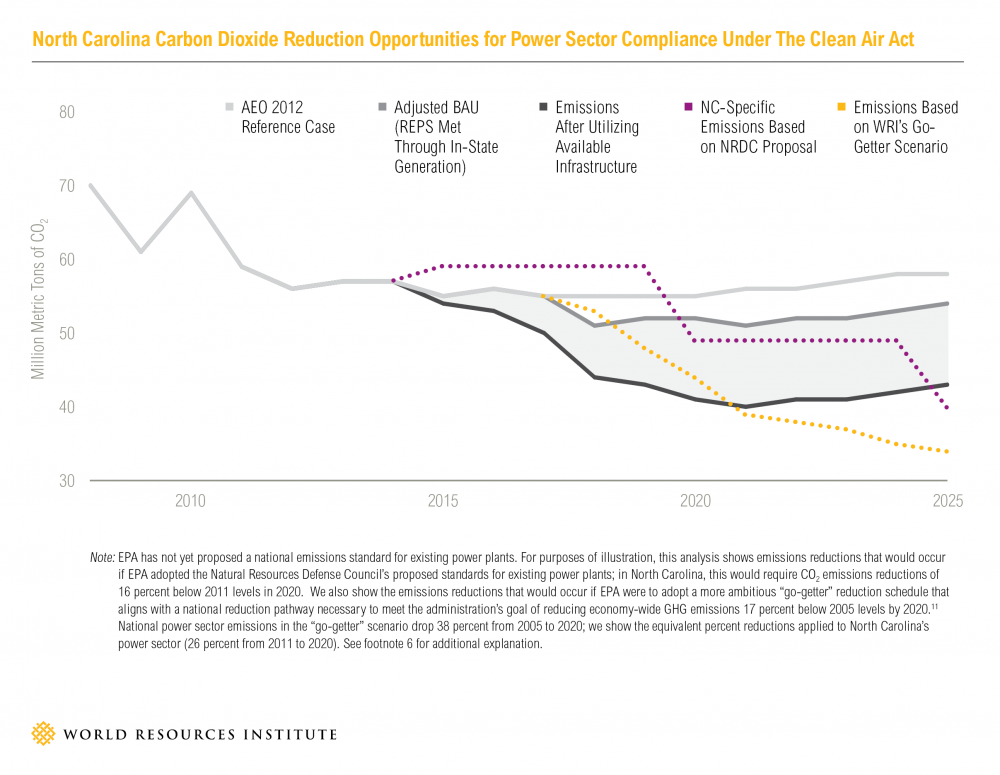 Click on the image to view a larger version.