The Boiler MACT rules, which are required by the Clean Air Act amendments of 1990, will only target the most significant sources of toxic air pollution. Most boiler-based emissions come from a small handful of very large industrial and commercial facilities that operate coal, oil, and biomass-fired boilers. As such, according to EPA: 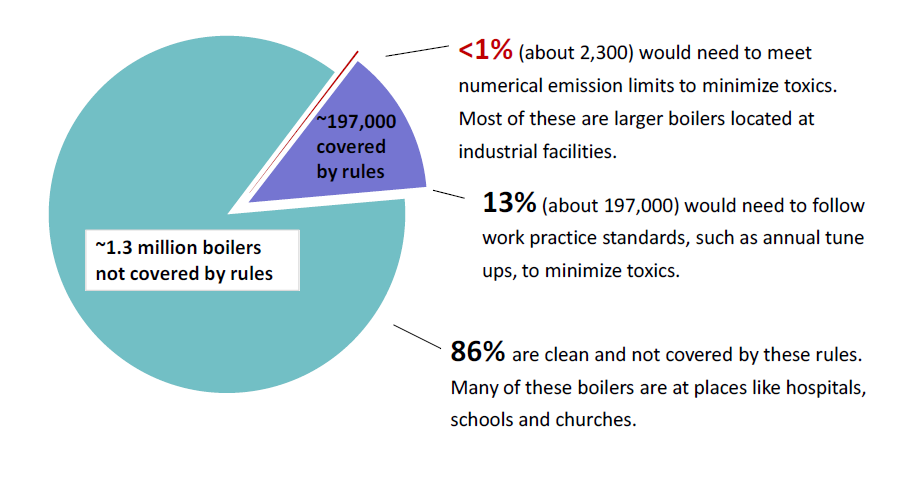 A lesser-known aspect of this new rule is that it includes several provisions that will reward facility investments in more energy-efficient equipment and practices. First, most affected boilers will be required to perform a one-time energy assessment to identify cost-effective energy conservation measures. Energy assessments by external, certified experts are a proven effective means to help even the most sophisticated industrial users achieve significant energy cost savings.

Only commercial- and industrial-scale coal, oil, and biomass-fired boilers that are relatively large and operated more frequently will be required to meet MACT emissions limits under the EPA’s new rules (about 2,300 boilers, or 1 percent of the U.S. total). Under the new standards, efficiency improvements will be recognized and even strongly incentivized. Specifically, facilities have the option to comply through the use of output-based emissions limits and to receive compliance credit for efficiency measures implemented across the facility that reduce demand for steam provided by affected boilers.

As a flexible alternative to MACT emissions limits, remaining major source boilers subject to the rule (the 13 percent referenced above) can comply through work practice standards. These boilers have significant emissions but do not have a capacity greater than 10 million Btu per hour, are not used more than 10 percent of the year, or do not use coal, oil, or biomass fuel. Work practice standards require regular tune-ups (to improve boiler efficiency and emissions performance) plus informational reporting requirements to the EPA.

Finally, in light of the significant capital costs required to retrofit most major source boilers to meet compliance with the MACT standard, some facility owners will likely consider fuel-switching to natural gas, thus avoiding the MACT emissions limit requirements altogether. Not only is natural gas a cleaner-burning fuel, but it is most compatible with a host of highly energy efficient combined heat and power technologies, with the potential for very significant, long-term energy-cost savings.

These new environmental standards will not only reduce toxic pollution, but will help spur greater efficiency across a range of U.S. industrial and commercial energy users. The EPA has taken steps to ensure that the rule will promote energy efficiency investments by improving environmental performance while increasing flexibility for affected facilities. This is good news for the manufacturing workforce, for public health, and for the climate.