This post was co-authored by Forbes Tompkins, an intern with WRI's Climate and Energy Program.

This post is part of WRI's "Extreme Weather Watch" series, which explores the link between climate change and extreme events. Read our other posts in this series.

The summer of 2012 is poised to go down as a record-breaker. (And no, we’re not talking about the Olympics).

Extreme weather and climate events continue to make headlines throughout the United States. Last month marked the end of the warmest 12-month period the nation has ever recorded. The National Oceanic and Atmospheric Administration (NOAA) recently declared July to be the hottest month ever in the United States since the government began recording temperatures in 1895. And already, 2012 has seen more temperature records tied or broken than in all of 2011, a year with an unprecedented 14 extreme weather events in the United States, each causing more than $1 billion in damages. This summer has seen more than just extreme heat. In June, drought encompassed 56 percent of the contiguous United States. In July that figure expanded to 63 percent, resulting in a drought-stricken breadbasket region that now encompasses 78 percent of the Midwestern corn belt. That’s on top of the storms and wildfires that have spread across the country this summer.

This Is Not a Fluke

So what’s at the root of all the drought, wildfires, and temperature spikes? The evidence is mounting that human-induced warming is contributing to increases in the frequency and intensity of certain types of extreme weather events (e.g., heat waves, torrential downpours). Two recently published studies also applied new research methods, convincingly linking climate change to several individual extreme weather events (read the full studies here and here). So, even as scientists develop new methods for attributing specific extreme events to climate change, supporting evidence for the general trend toward more frequent and intense events has become disturbingly clear. 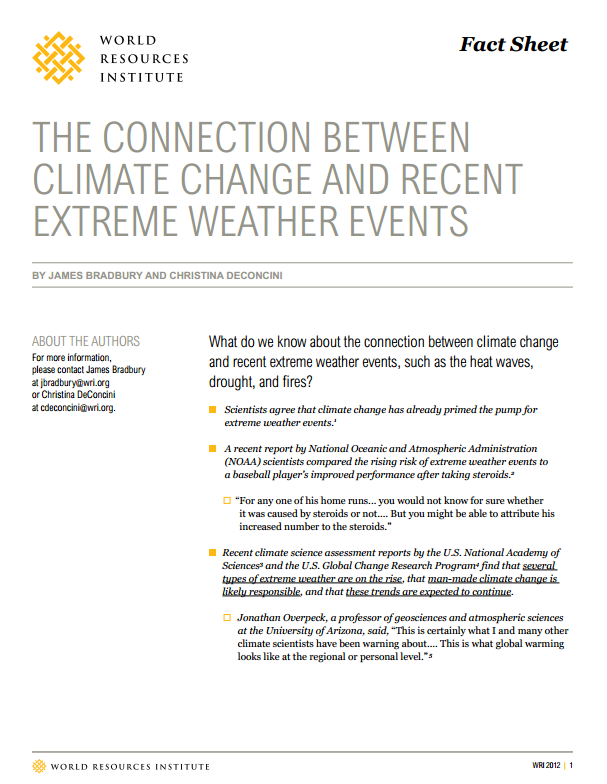 WRI recently published a fact sheet that explains what the latest research can tell us about the connection between climate change and extreme weather and climate. Here are some of the highlights:

And just last week, James Hansen, one of the world’s leading climate change scientists and head of the National Aeronautics and Space Administration (NASA) Goddard Institute for Space Studies, concluded that the droughts experienced by Texas and Oklahoma in 2011 were a consequence of climate change, and he’s confident the same will likely prove true for this summer’s extreme heat throughout the U.S.

What the Future Holds

By continuing business-as-usual greenhouse gas (GHG) emissions, we are tipping the scales toward a riskier future. Recent scientific assessment reports suggest that if the nation—and the world—continue down the GHG emissions-intensive path we are on, the extreme weather conditions we’re currently experiencing will become less the “extreme” and more the norm in the future. With rising average temperatures, heat waves are expected to become more intense, frequent, and longer-lasting, according to the National Academy of Sciences. Droughts are no exception: They are projected to grow in severity and frequency across large swaths of North America in the coming years.

It should come as no surprise that these recent extreme weather and climate events and the new science assessments have generated significant media attention and caused an increasing number of people to worry about global warming’s impacts. Strong action to address greenhouse gas emissions is needed in the face of unfolding extreme weather and climate events and the prospects for much worse in the future. Limiting climate change and its resulting extreme events will require new policies as well as the continued and expanded use of existing authorities (like the U.S. Clean Air Act and state actions) to reduce greenhouse gas emissions in an effective way. We need action now—not only to advance solutions, but to re-ignite a national dialogue that helps the public understand the economic and health implications of a future climate that brings unrecognizably hot and extreme weather.