With more than 75 percent of the world’s coral species and twice the number of reef fish found anywhere else in the world, the Coral Triangle is the center of the world’s marine biodiversity. Stretching from central Southeast Asia to the edge of the western Pacific, 130 million people in the Coral Triangle region depend on marine resources for food and livelihoods. In this way, the region’s coral reefs and associated fisheries are vital to people and national economies, but they’re also severely threatened by overexploitation.

Recognizing the critical role that coral reefs play in people’s lives and the regional economy, the governments of the six countries that make up the Coral Triangle—Indonesia, Malaysia, Papua New Guinea, the Philippines, Solomon Islands, and Timor-Leste—came together in 2009 to form the largest marine governance initiative in the world, the Coral Triangle Initiative on Coral Reefs, Fisheries and Food Security (CTI-CFF). Their common goal is to manage their valuable marine resources so that they can continue to provide benefits to people in the future.

Reefs at Risk Revisited in the Coral Triangle

In support of this ongoing initiative, the World Resources Institute and the USAID-funded Coral Triangle Support Partnership have just released a new report, Reefs at Risk Revisited in the Coral Triangle. The report provides both a region-wide and country-level perspective on the risks to reef ecosystems. 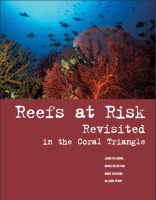 Ultimately, Reefs at Risk Revisited in the Coral Triangle found that 85 percent of the region’s reefs are threatened by local human activities such as overfishing, destructive fishing, coastal development, and land-based pollution. When factoring in projections of climate-related ocean warming and acidification, all of these reefs will likely be threatened by 2030 if actions are not taken to significantly reduce global greenhouse gas emissions.

At the national level, reefs in the Southeast Asian countries of Indonesia, Malaysia, Philippines, and Timor-Leste are most at risk; in each case, at least 95 percent of the country’s reefs are currently threatened by a combination of overfishing, coastal development, and pollution. Our analysis of nations’ social and economic vulnerability to reef degradation and loss found that the Philippines is the most threatened country due to people’s high collective dependence on reef resources for food and income, as well as fewer options for alternative livelihoods.

Hope for the Future

The coral reefs of the Coral Triangle are the most threatened in the world. However, given the unity of governments around CTI-CFF, there is also a lot of hope surrounding their future. Since the establishment of CTI-CFF, the six national governments involved have adopted regional and national plans of action aimed at managing pressures on their resources. Also, the past few years have seen a rise in the number of marine protected areas in the region, as well as increased awareness about the beneficial effects reef management can have on fisheries production and tourism potential.

Reefs at Risk Revisited in the Coral Triangle serves as a status report on the well-being of coral reefs in the region—identifying where reefs are most threatened and providing baseline data to help groups like CTI-CFF establish and prioritize specific management strategies. While there is still much work to be done to preserve the Coral Triangle’s reefs, many of the most important elements—particularly multi-government cooperation around a common environmental goal—are in place for continued, positive action.