We are happy to announce the results of the project that we launched in May to assess how recent climate science discoveries can be most effectively communicated via video. In just one month, we received more than 1,500 entries.

Next, we’ll be hosting a webinar on the project on Tuesday, June 19th. See more below. For this pilot project, supported by Google.org, we worked with three scientists to produce a series of climate science videos: Andy Dessler, professor of Atmospheric Sciences at Texas A&M University; Brian Helmuth, professor of Biological Sciences at the University of South Carolina; and Paul Higgins, Associate Director of the American Meteorological Society’s Policy Program. For each scientist, we produced three different video types:

We then invited the public to view the videos and vote on their favorites.

Thank you to everyone who took the time to vote. And, now, here are the results: 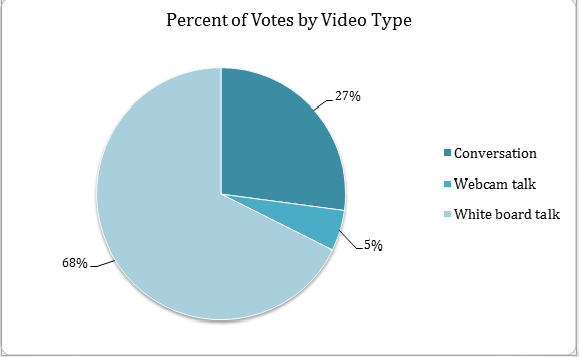 To be sure, it was not a perfectly designed study. As some viewers pointed out, had the video types been presented in a randomized order, we may have seen a different outcome. Additionally, many felt that they had been forced to vote for one video type over another, when what they really preferred was a combination of elements from several types.

During the webinar, I will provide more detail on the feedback received. In addition, WRI’s Dave Cooper will discuss the video production process, and Brian Helmuth and Paul Higgins, two of our featured scientists, will speak about their participation in the pilot project as well as science communication more broadly. We hope you will join us!

Join the presentation by visiting this link, and use the above number for audio.