The 1992 Earth Summit was a bright moment for the environmental movement. For the first time, presidents and prime ministers—more than 100 in all—were “coming together to save the earth,” as a headline on the cover of Time magazine put it. What’s more, the U.N.-led conference in Rio de Janeiro yielded some genuine results. Among them were major global treaties on the climate and biodiversity. Rich and poor countries alike also made a broad new commitment to sustainable development— as spelled out in the Rio Declaration and an accompanying “action plan."

Was it too much to hope that humanity had turned a corner?

Unfortunately, the answer to that question appears to be yes. Despite some progress, the world is still waiting for the global response that the original Earth Summit seemed to promise— a promise that will now be revisited, as thousands of representatives of government, civil society, and business return for the Rio+20 conference. Expectations for this year’s summit are appropriately modest, as the focus shifts from global declarations and treaties to catalyzing action on the ground. The moment seems ripe for stock-taking: how the world has changed since the first Rio summit, where the opportunities for progress are, and how Rio+20 might build on those opportunities to create a genuine moment to drive more ambitious action toward a more sustainable future.

Heading in the Wrong Direction

While we have won some battles, the most important environmental trend lines are troubling, to say the least.

“Rio was the high water mark,” observes Gus Speth, the founder and former president of the World Resources Institute, which was deeply involved in the original Rio summit. “The water fell pretty quickly after that.”

Let’s start with the greatest single threat to people and the planet: climate change. New data from the International Energy Agency shows that global carbon dioxide emissions reached a record high of 31.6 billion metric tons in 2011, an increase of 3.2 percent over the previous year. As greenhouse gas emissions head toward ever-more dangerous levels, some consequences have already arrived in the form of record-breaking temperatures, rising seas, and more frequent and intense extreme weather events, such as droughts and floods. 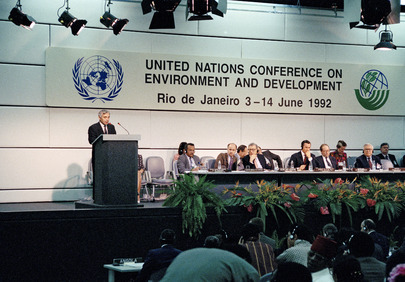 Rising temperatures are exacerbating another emerging threat: water scarcity. According to a study by the 2030 Water Resources Group, within two decades, one-third of the world’s population will live in regions where water demand outstrips supply by at least 50 percent. Access to water is essential for public health, hygiene, and food production, not to mention for energy production and manufacturing.

These changes are increasing pressure on ecosystems already under extreme stress from human activities of one kind or another— fishing, farming, extractive industries, and real estate development, to name a few. In 2005, the UN-led Millennium Ecosystem Assessment found that globally, two-thirds of ecosystem services are already degraded due to humans. The loss of these ecosystems will jeopardize our ability to feed, house, and clothe a growing population, to say nothing of the livelihoods that depend on them.

As we contemplate these challenges, it’s important to understand how the world has changed in the last two decades, in ways that pose both risks and opportunities: 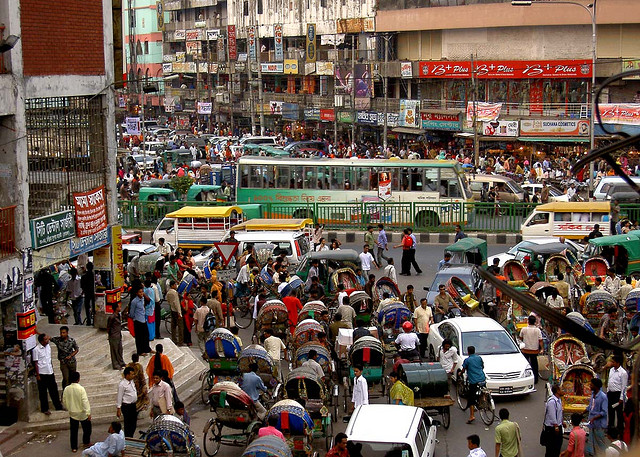 Exploding growth in the developing world has created a vast new middle class, which could near five billion by 2030. Photo credit: Flickr/lepetitNicolas

In the years since the first Rio summit, the scientific case for protecting the natural world has been made. In other words, we know the why of sustainable development.

We also know the what, as in what needs to be done. Put in the simplest terms, the world needs to transition to an inclusive, sustainable economy that promotes human development in ways that do not destroy nature. Mechanisms for achieving this— such as pricing externalities and transferring technology — are well known. Many are spelled out in Agenda 21, the action plan that accompanied the original Rio Declaration 20 years ago.

That brings us to the third and toughest question: the how of sustainable development. How do we shift to an economic pathway that is genuinely sustainable? Who will provide the political and business leadership– which remains, for the most part, noticeably absent? How do we overcome the inertia and vested interests that continue to prevent the grand scale implementation of the policies that we already know to be effective? What is the right policy mix to get us there? How do we generate public support?

One essential ingredient is that we must do a better job of making the business case for sustainable development. Too many people still think of environmental sustainability as standing in opposition to economic growth, when the opposite is often true.

A just-released report by the International Labour Organization finds that a transition to a green economy could create 15 to 60 million additional jobs globally over the next two decades, while lifting millions out of poverty. Economic arguments can also be made in terms of climate action— or inaction. Lord Nicholas Stern, for example, calculated that “the overall costs and risks of climate change will be equivalent to losing at least 5 percent of global GDP each year.” Such hard-nosed economic analysis has too often been pushed aside in the overheated political debate on climate change and other threats to sustainability.

The time is also ripe to move sustainability into the mainstream of business thinking and practice. While there is still significant private sector resistance to change, some prominent businesses have begun to embrace sustainability, both to reduce risk and to exploit opportunities for new markets. In recent years, General Electric has earned big profits from its “Ecomagination” line of energy-efficient products. Siemens is likewise betting its future growth on rapid expansion of markets for sustainable products, energy efficiency, and greener buildings. The rapid growth of the clean energy sector worldwide has been powered in part by leading technology companies, including Google, Microsoft, and Apple, who are investing in renewable energy to power their operations. 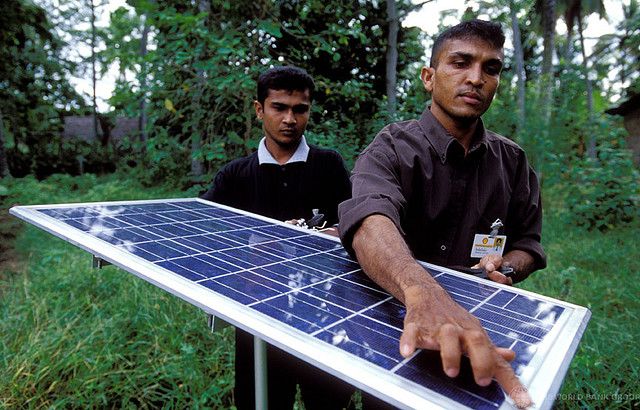 International Labour Organization research shows that a transition to a green economy could create 15 to 60 million additional jobs globally over the next two decades. Photo credit: Flickr/World Bank Photo Collection

The Need for More Leadership

Making the economic case for sustainability, with brand name companies showing the way, is a good start to win public backing. But actual implementation of a global green economy will not be achieved without political leadership of the first order. At Rio+20 and beyond, world leaders need to come together to signal that a sustainable future is a priority for the international community.

On a practical level, governments also need to step up to create the policy framework and conditions for the green economy to flourish. This, in turn, will encourage businesses to do what they do best—innovate and create new markets.

We have already seen how effective such policies can be. Germany’s “feed-in” tariff is among the most persuasive arguments for bold government action on renewables. Now more than two decades old, the tariff guarantees that producers of electricity from wind, solar, biomass, and hydropower will be able to sell power to utilities at a reasonable profit. Last year, Germany led the world with 24.6 gigawatts of renewable energy capacity, and in May, for at least one day, 50 percent of Germany’s electrical power came from renewables. Meanwhile, Germany’s energy strategy— including support for research and development, training programs, and investment in infrastructure— has created more than 380,000 new jobs. According to Pew Charitable Trusts, Germany’s investment in clean energy topped $30 billion in 2011, helping drive a record of $263 billion worldwide.

Listening to the Governed

So, we know measures that promote sustainable economic development can work. But all too often, special interests have blocked their implementation in ways that harm the environment and society. In many countries, people don’t even have access to information or the freedom to express their views. Improved governance, with open and accountable institutions, is therefore essential to achieving the goals of sustainable development.

One specific example is advancing Principle 10 of the Rio Declaration, which asserts that citizens should have access to information about the environment, the opportunity to participate in decision-making, and access to judicial and administrative proceedings to seek redress and remedy. While we’ve seen progress by some countries in giving more people a voice in decision-making, without an adequate legal framework, there are no guarantees that these trends will continue. 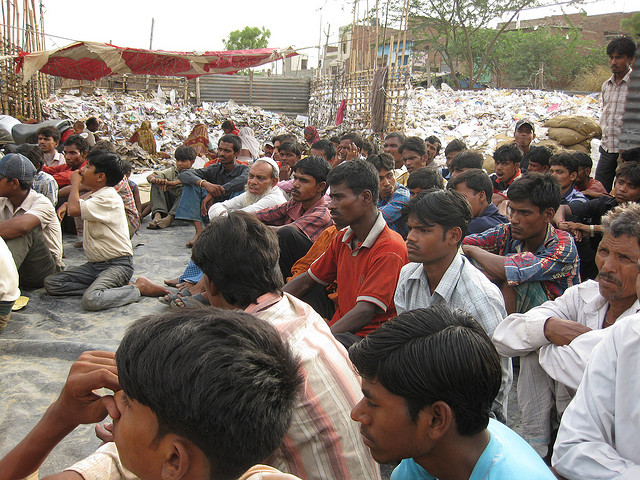 Principle 10 of the Rio Declaration asserts that citizens should have access to information about the environment and the opportunity to participate in decision-making. Photo credit: Flickr/The Advocacy Project

Rio is a time for action, not for more talk. What we need are specific and measurable actions that contribute to already globally negotiated goals. Of course, we will see action in the formal declaration (the outcome text), but a lot of the most important developments will take place in informal meetings and side events.

We will be watching in particular to see what kind of progress heads of state and government, business, and civil society representatives make on five key issues:

Finally, beyond individual commitments and declarations, Rio is an opportunity to help reinvigorate the global dialogue on sustainability. What other issue brings so many people from so many countries together at one time? At its best, Rio can help construct a refreshed narrative that will drive more ambitious action on the ground. And rarely has ambitious global action been more imperative to human well-being than it is today.

One event cannot solve everything, but Rio+20 is a critically important place to start.