As government leaders prepare for next month’s UN Conference on Sustainable Development (Rio+20) in Brazil, one issue is conspicuously absent from the agenda: land rights. Strong property rights—the rights for people to access, control, transfer, and exclude others from land and natural resources—create incentives to invest in sound land management and help protect land from expropriation.

Strengthening land rights has not featured prominently in Rio+20’s first two Preparatory Committee (PrepCom) meetings or the “Informals” that preceded them. In fact, only one line in the 29 March draft of The Future We Want, the principle outcome document for Rio+20, touches on land rights. That reference—“avoid creating food and water insecurities and limiting access to land, particularly for the poor”—has already been opposed by a number of developed nations, including the United States and the European Union.

Why Strong Land Rights Are Important

Strong land rights are linked to improved agricultural production, poverty reduction, and economic growth. In an assessment of 129 countries, the Property Rights Alliance, a US-based advocacy group, found that nations in the top 20 percent of the International Property Rights Index enjoyed an average per capita income that was eight times higher than those in the bottom 20 percent (see box below). 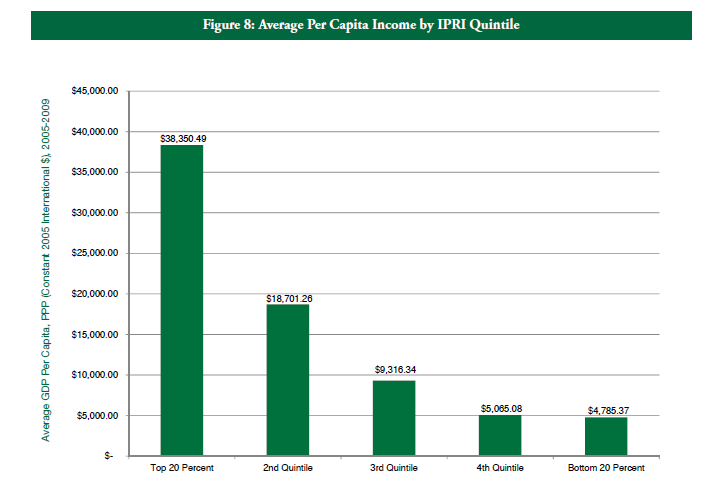 Strong property rights help rural people hold onto their land and natural resources when threatened with loss of access or expropriation. Secure tenure also incentivizes sound land and environmental management because landholders have confidence that they’ll reap the benefits from those investments. These benefits are central to improving local well-being and achieving sustainable development. Some examples include:

In contrast, weak property rights discourage investments and allow powerful actors to acquire land held by poor, rural people. The large-scale land acquisitions by foreign investors in Africa are generating headlines, but they’re just one of many threats to small farmers. Africa’s rural populations have a long history of losing land to commercial agriculture, conservation, and extractive resource operations. People with weak property rights often mine their land out of fear of losing it. Plus, evidence shows that involuntarily displaced people often fall deeper into poverty even when they are compensated for property losses.

Getting Land Rights on the Rio+20 Agenda

The next Informals will take place next week in New York, while the third and final PrepCom is scheduled for next month in Brazil, just prior to Rio+20. The delegates, especially those from G77 countries, must step up and address the needs and interests of the smallholder farmers they represent.

It’s unclear why several developed nations oppose the existing provision in The Future We Want—whether they disapprove of any mention of strengthening land rights or just oppose the current language. If the former, the delegates and their advisors must be convinced that strong property rights are central to achieving sustainable development and reducing poverty. If the latter, the delegates must be encouraged to come together and hammer out acceptable language calling for protection of local land rights.

Some delegates may oppose including language on land rights because it threatens their national interests—for example, achieving food security by acquiring farmland in Ethiopia, meeting energy needs by growing biofuels in Tanzania, or obtaining raw materials by securing logging rights in Cameroon. They may be concerned that the phrase “avoid creating food and water insecurities and limiting access to land” could be interpreted to mean that land held by local people should not be acquired, or that local people should have unlimited access to land. Delegrates should embrace language that recognizes existing local land rights, whether under customary or formal law, and that calls for strengthening local rights to provide people with security over their property.

Strong language on protecting property rights in The Future We Want will set the stage for land and natural resource rights to be included in the proposed Rio+20 Sustainable Development Goals.