The Wei River in west-central China is not just the largest tributary of the Yellow River, but it has also been a critical water source for communities for thousands of years. To manage this important resource, water authorities in China just announced that they plan to invest 6 billion yuan - more than US$950 million - this year to fight floods and pollution in the Wei.

This investment in water management comes after flooding on the Wei killed dozens of people and forced tens of thousands from their homes in the fall of 2011. On top of these terrible human costs come severe economic impacts. According to some estimates, the 2011 flooding cost China more than 6 billion U.S. dollars. Events like the 2011 China floods and the recent devastating flooding in Thailand are putting water risk front-and-center in the minds of businesses, investors, and governments worldwide. This awareness is driving greater demand for better information to understand how and where these water risks might appear. Aqueduct’s water risk mapping tool brings together a myriad of data about water quality, quantity, and other indicators to provide that better information.

We used Aqueduct’s maps of the Yellow River basin— which include the Wei River— to uncover some of the trends and data points that illuminate the water quantity risks facing the region. Using Aqueduct’s online mapping tool, we generated the map below, which combines data on four different indicators of water scarcity and flood risk to show an overall map of relative water quantity risks along the Wei River. The red dots on the map show five cities in the Wei watershed – Baoji, Xi’an, Weinan, Xianyang, and Tianshui. 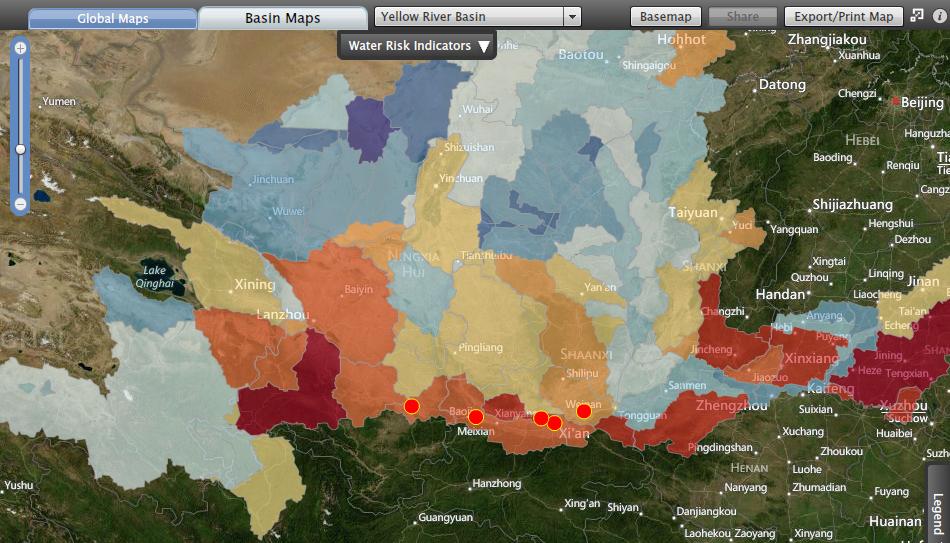 The orange and red coloring of the Wei River region show areas exposed to relatively high potential risks around water quantity – a conclusion supported by the recent flooding and the Chinese government’s investments in the region. Water risk maps such as this one show how the right data can come together to spotlight the places where companies and public officials may need to direct their attention.

You can scroll through those maps in the window below to learn more about how they were created, or visit the Aqueduct Water Risk Atlas online to recreate the maps yourself. 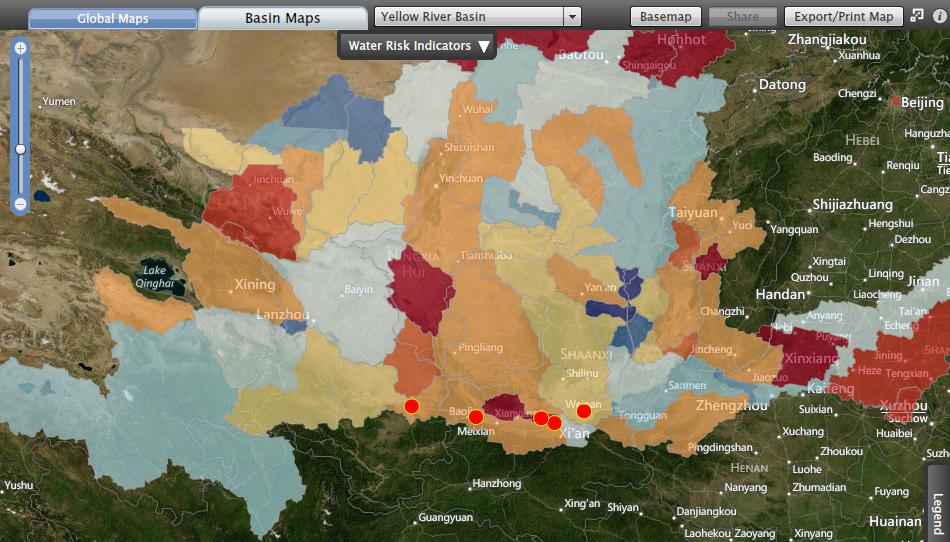 First, we looked at where the Wei falls on a map of our Baseline Water Stress (BWS) indicator. This map shows the intensity of competition for water resources, using a model that calculates what proportion of an area’s renewable water supply is withdrawn for human uses in a given year. The yellow-orange color of the Wei river area shows that water users in the region withdraw a large, but not overwhelming, proportion of its renewable water supply every year, compared to the rest of the Yellow River basin. 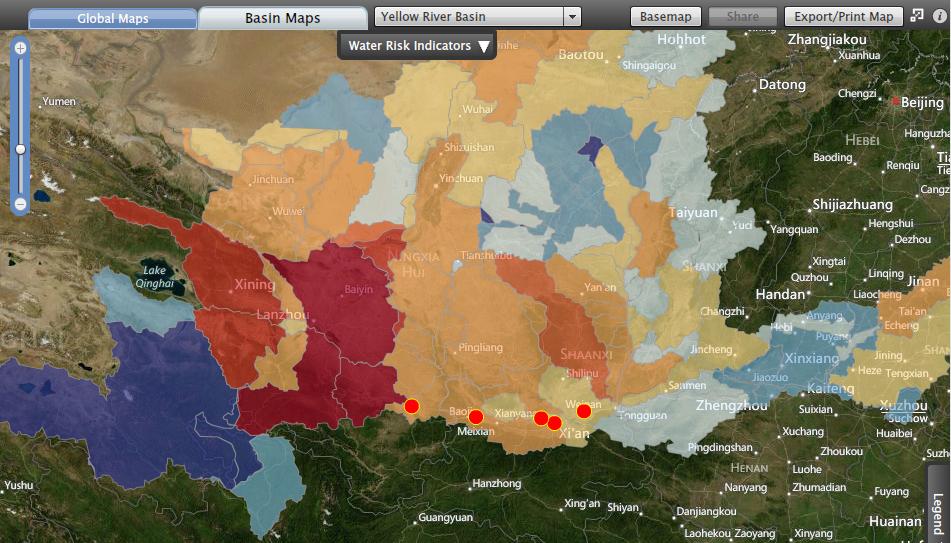 Next, we looked at a map of our Flood Frequency indicator. This map is based on a count of the number of historical flood occurrences over the last 25 years in particular river basins. The light orange color of the Wei region indicates that flooding has historically occurred more frequently in those areas than the blue areas. Since data on flood events is limited and historical events do not necessarily predict future flooding, this map should only be viewed as a rough approximation of flood risk. Trend data and climate model projections make it clear that in many areas, more intense storms globally may create higher flood risks than in the historical record. Approximate indicators like Flood Frequency are most valuable when combined with other indicators to create a composite risk map. 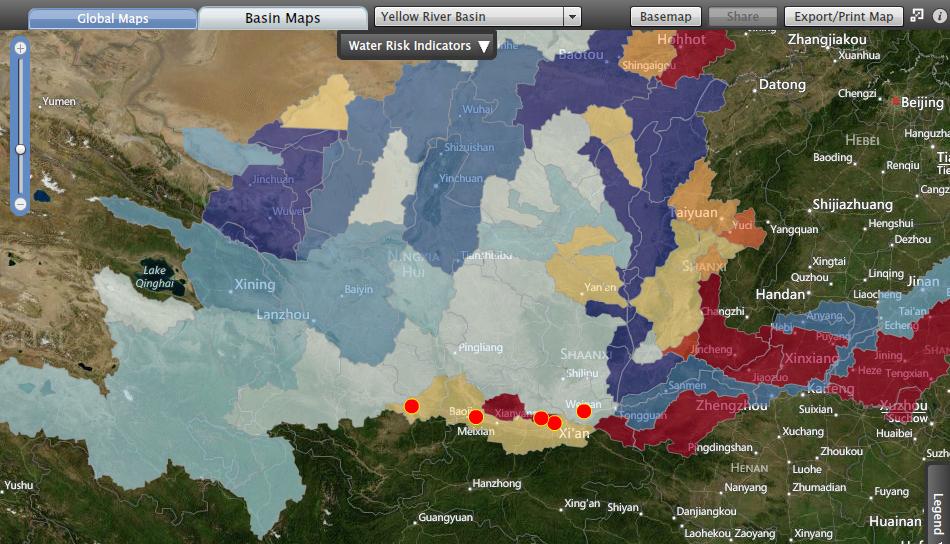 Next, we looked at a map of the Interannual Variability indicator. This map shows how much water availability fluctuates from year to year in different parts of the basin. The yellow to red coloring of the Wei River region indicates that water availability does not vary as widely from year to year as it can in the eastern stretches of the Yellow River. However, water supply in the Wei is also not as predictable as it is to the north and west. Interannual variability is of particular concern to water users making long-term investments in an area, such as manufacturers constructing factories, with high water demands and long lifespans. 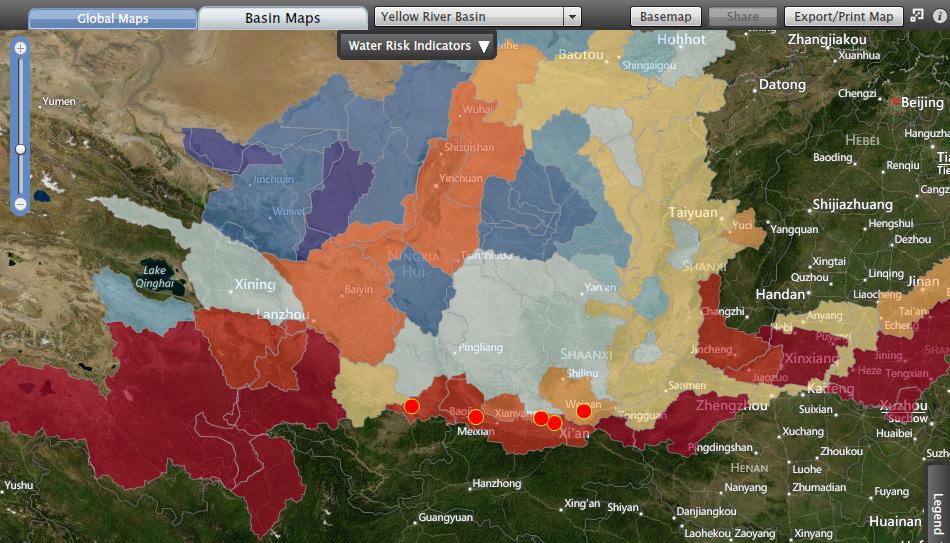 Another indicator we looked into was Seasonal Variability. Seasonal Variability maps how widely the availability of water varies from wet to dry seasons within a year. The dark orange and red coloring of the Wei River basin shows that water supply has historically swung much more dramatically from season to season in that area than in other sections of the basin, increasing the relative risk of acute flood or water shortage events. Seasonal variability is of particular concern to water users that rely on consistent water availability throughout the year, such as certain power plant operators who need constant access to abundant cooling water.

Maps like these are an important first step towards understanding and managing water risk, but they do not tell the whole story. To truly understand the risks a company faces, you would need to find out more about the specific water needs of the business, as well as how other companies, communities, and government agencies manage their shared water resources and mitigate those risks. Investments in improved water infrastructure like the ones planned by the Chinese government in the Wei River region can mitigate water risks in the places they emerge most frequently. Aqueduct's water risk maps can help companies, investors, and governments target and plan the investments and improvements that can make the risky world of water a little safer.