As world leaders prepare to converge on Rio in June for the UN Conference on Sustainable Development (Rio+20), civil society groups around the world are making demands of their leaders. In India, a broad coalition of environment and development NGOs are decrying state-sanctioned violence during hearings for major projects. In Colombia, civil society groups are calling for training of judges who often don’t understand environmental law. These are just a few of the many governance demands made by NGOs in more than 30 countries associated with the Access Initiative (TAI).

But, how will leaders react? Many may come to Rio+20 with commitments, but how can we hold them accountable to fulfill these commitments? Ambassadors are gathering this week in New York to negotiate “The Future We Want,” the outcome document that will guide sustainable development over the coming decade. While the permanent representatives to the UN debate the details of the official goals, another important development is under way: the “Compendium of Commitments.”

The Compendium, in a nutshell, would be a platform or registry of pledges by governments, civil society and the private sector that aims to fulfill globally-agreed-upon goals around a number of key themes, whether from prior (ratified but unfulfilled) multilateral environmental agreements, global sustainability initiatives, or principles enshrined in the 1992 Rio Declaration. 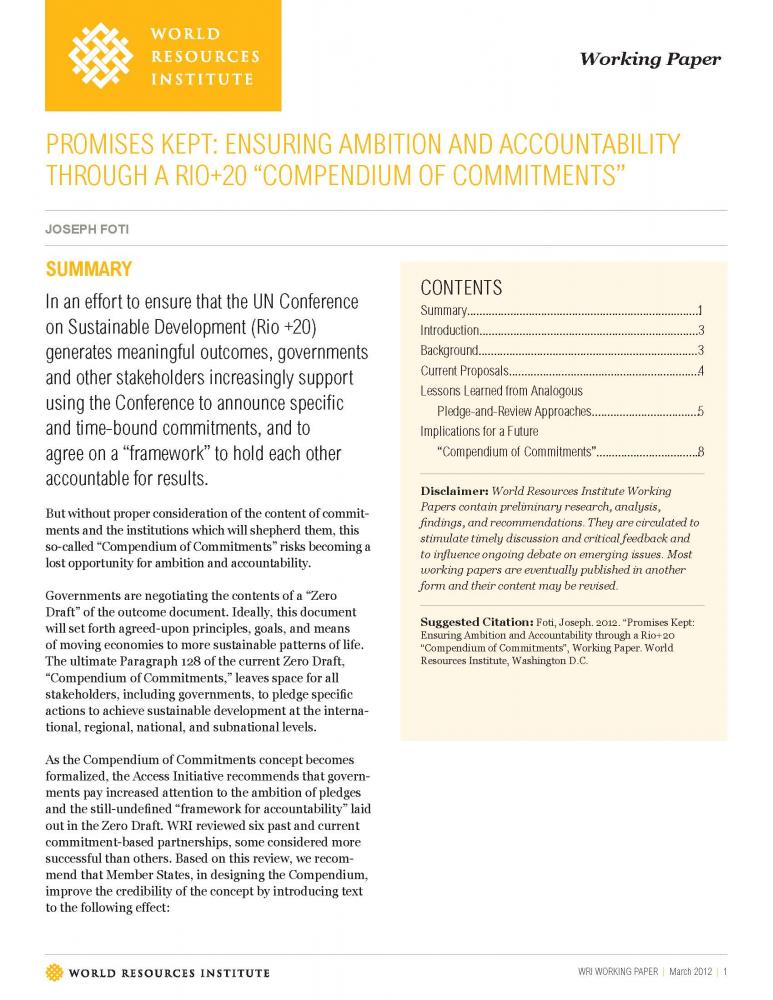 Read WRI's working paper on the Compendium of Commitments

This bottom-up approach differs from what was tried at the UN Conference on Environment and Development in Rio in 1992, and at the World Summit on Sustainable Development in Johannesburg in 2002. The 1992 Rio conference focused on the passage of a number of multilateral environmental agreements. In Johannesburg, the conference focused on large-scale multi-stakeholder partnerships. The former has been criticized as too “state-centric,” while the latter did not, on the whole, move us toward sustainability.

The Compendium idea has taken root out of a very real fear that Rio+20 negotiations in New York could arrive at nothing more than vague rhetoric with nations telling each other what they should achieve rather than taking concrete steps.

What makes a Compendium different? A few things:

This invitation to register specific commitments could help shift responsibilities to the governments that must refine and then adopt it. The best way to give this process focus in the coming months would be for governments, with support and inspiration from civil society, to identify specific and timebound targets they are prepared to commit to and be held accountable for at home and on the global stage. Through these specific commitments, it should become clearer what governments are prepared to achieve both individually and collectively following Rio+20.

Three Demands Campaign: A Model for Stocking the Compendium

The many partners of TAI have been making demands through the “Three Demands Campaign” for open government in sustainable development decision-making. TAI partners have made specific requests that their respective governments come to Rio+20 with commitments in hand, to fulfill the promise of the original Rio Declaration on Environment and Development’s Principle 10. This principle enshrined essential pillars of sustainable development decision-making: access to information, public participation and access to justice. From demanding better freedom of information laws, to requesting stronger systems of public participation in environmental impact assessments, or improving courts with environmental jurisdiction (so-called “green tribunals"), the Three Demands Campaign has put concrete proposals on Principle 10 into the hands of heads of state around the world.

TAI members already have cultivated a number of exciting commitments and initiatives from governments, which will be announced at “Choosing Our Future: Open Government and Sustainable Development,” the premiere governance-oriented event in Rio on June 19.

There are a number of additional steps which must be taken to secure commitments between now and Rio+20:

At the moment, much of the Rio+20 process is awash in general statements of principle. Those government, civil society, and private sector actors who wish the process to come up with clear, meaningful outcomes should concentrate their efforts towards identifying specific and time-bound targets, and setting up structures that encourage accountability. Mandating and populating a Compendium of Commitments would send a resounding message that Rio+20 is about implementation, about credibility and about keeping promises.

Note: Jacob Werksman, the former director of WRI’s institutions and governance program, contributed to this piece.