We are launching a new online tool, the Power Almanac of the American Midwest, that will assist government officials, industry leaders, energy analysts and others in making informed energy decisions in the region. The Almanac integrates key energy and environmental data from some 50 disparate sources, tailored to the Midwest region, in a graphic and easy-to-use way.

The Almanac is built around a dynamic interface that allows users to explore the power sector through interactive Google maps, graphs, and charts. You can use it to learn more about an individual coal mine or power plant, or to compare wind and solar resources in the Midwest to the rest of the United States. You will also find a range of other useful background, including up-to-date information on relevant state and federal energy policies.

If you are interested in energy issues in Illinois, Indiana, Iowa, Kansas, Michigan, Minnesota, Missouri, Nebraska, North Dakota, Ohio, South Dakota, and Wisconsin, this Almanac is for you.

Why should you care?

Most of us don’t think about electricity until there is a power outage or accident. Yet, electricity is literally the life blood of all of our lives—from cell phones and computers to powering our homes and places of work. We hope this Almanac will help decision makers and everyday consumers alike get a clearer picture of how we produce electricity today, options for the future, and important implications of those choices.

Shale Gas in the Midwest 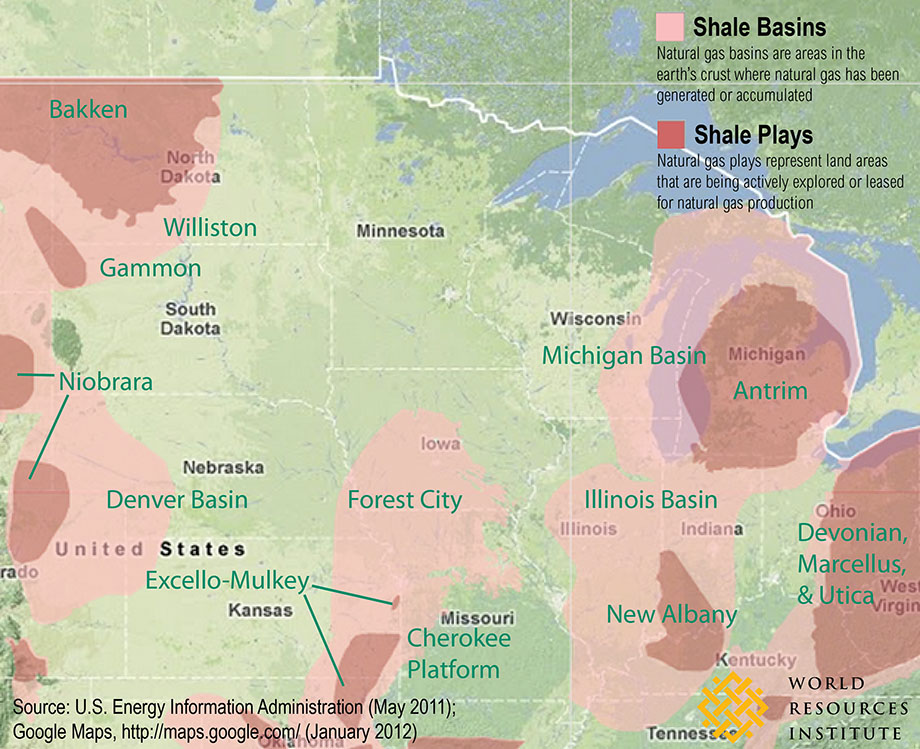 Click the thumbnail to see a map of Midwest shale gas basins and plays, or visit the Almanac to see a range of data on natural gas in the region.

The Midwest represents more than 30 percent of the nation’s manufacturing and accounts for 22 percent — or one-fifth— of total electricity consumed in the United States. It is home to more than 1,800 power plants. The Almanac helps users understand this system, and the various energy strengths and challenges of the states in the region.

The Almanac will help inform each state’s decisions about how best to produce electricity, while considering other important factors, like the economy, environment, public health, and more.

Here are a few ways that the Almanac can be used:

How to use the Power Almanac

This is just a sampling of the kinds of information presented in the Almanac. We encourage you to explore it for yourself and let us know what you think.

We welcome feedback on ways to improve it. Go to: /midwest-almanac. Send your comments to: Kristin Meek at kmeek@wri.org.

The Power Almanac of the American Midwest was developed by the World Resources Institute and the Great Plains Institute. It used data from 50 sources and has gone through a rigorous review with more than 20 regional and national energy and environmental experts.

You can listen to WRI's press call launching the Almanac below. The call features experts from WRI, the Great Plains Institute, and the public sector introducing the tool and answering questions from journalists. The call features the following experts: