For too long, the United States has lacked a clear, national energy policy. Today, Senator Bingaman took a step in that direction by introducing the Clean Energy Standard Act of 2012 (CESA), which would create certainty for clean energy investments, diversify the U.S. power mix, and yield meaningful carbon emissions reductions. This bill is the first legislative proposal in this Congress aimed at creating a path toward a comprehensive national climate and energy policy. The bill is similar to, but more stringent than, other “clean” or “diverse” energy standards floated separately in the last Congress by Republican Senators Graham and Lugar. It also aligns with the national energy policy proposed more recently by President Obama. CESA would require electric utilities to supply up to 84% of their electricity sales from qualifying energy resources by 2035. In addition, CESA would be revenue-neutral to the federal budget.

Consistent with prior clean energy standard (CES) bills, electricity generated by all fuel types could be eligible to earn credits under CESA, including wind, solar, nuclear, and natural gas, as well as coal that uses carbon capture and storage technology. 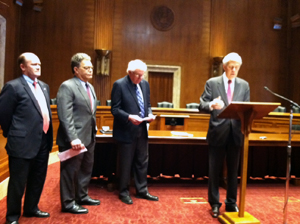 This bill is designed to improve the greenhouse gas emissions performance of the U.S. electric power fleet by setting a stringent but achievable clean energy supply target, which helps to ensure that greenhouse gas benefits are realized. In the bill, crediting is based on greenhouse gas emissions intensity: zero-carbon generators would receive full credit, while low-carbon generators would receive partial credit based on how carbon intensive they are compared to today’s most efficient coal-fired power plants.

Several modeling studies conducted by government and independent researchers have explored how a potential CES would impact the U.S. electricity resource mix, greenhouse gas emissions, and consumer electricity rates.1 We’ll have to wait a few weeks for the independent Energy Information Administration (EIA) to model CESA specifically. However, at the request of Senator Bingaman, the EIA published detailed analyses of several variations on this bill and found that a CES policy would create a more diverse, less carbon-intensive U.S. electricity mix. For example, EIA estimates that a CES would result in a five-fold increase in U.S. wind power production, more than double what would be achieved without this policy in place.

Importantly, modeling studies consistently find that an 80% CES by 2035 would deliver meaningful greenhouse gas emissions reductions. For example, the EIA estimates that power sector carbon dioxide emissions in 2035 would be 43% lower than without a CES; that’s a 20% absolute reduction relative to 2008 levels.

It should be noted as well that the final section of the CESA requires a study on “natural gas conservation,” which would quantify upstream “losses of natural gas” and recommend policies necessary to reduce these losses. This requirement appropriately recognizes that much more can and should be done to reduce upstream emissions of methane, a powerful greenhouse gas, from throughout U.S. natural gas production and distribution systems.

To help minimize rate impacts, CESA exempts small utilities (thus exempting many co-ops and municipally-owned utilities).2 In addition, utilities may comply by paying a fee, known as an alternative compliance payment. That payment starts at 3 cents/kWh in 2015, and annually increases by 5% plus the rate of inflation. This revenue would go directly back to states and consumers through energy efficiency programs. This could complement bipartisan energy efficiency legislation that passed through the Senate Committee on Energy and Natural Resources, chaired by Senator Bingaman, earlier in this Congress.

As the Committee began to consider this legislation last year, WRI weighed in about how to build a ‘good’ CES program. In the coming days, WRI will publish a detailed summary of CESA (now available here), plus estimates of the economy-wide emissions that this proposal could achieve if enacted into law. We recognize that much more is needed to rein in U.S. greenhouse gas emissions across all sectors of the U.S. economy. But evidence to date suggests that a strong CES would be a very good start.

A Path Toward A Clean Energy Future

It’s time for the U.S. to get off the sidelines and into the clean energy game and seize the economic opportunities that clean energy development provides.

After all, it’s been almost two years since the Senate considered legislation that would put the U.S. on track toward a clean energy future. In the summer of 2010, just after climate legislation collapsed in the Senate, Kevin Parker, head of Deutsche Bank's global asset management division, signaled his intention to take the vast majority of the bank’s $6 billion in "green" investment funds to China and Western Europe. Clearly frustrated by the lack of legislative progress, Mr. Parker said of the U.S., “They're asleep at the wheel on climate change, asleep at the wheel on job growth, asleep at the wheel on this industrial revolution taking place in the energy industry."

As Sen. Bingaman noted on Feb. 29, "I don't entertain the illusion that the proposal will sweep through Congress and get signed into law this year, but it's an important discussion to have." And we expect that there will be a lively debate on the details of this proposal. While time will tell if this bill gains traction, it’s already clear that the Clean Energy Standard Act of 2012 provides a useful vehicle to resume this important policy discussion.