This post was written with Sara-Katherine Coxon, Objective Coordinator at the World Resources Institute.

“Smog was a daily occurrence, something you could taste and see.”

This reflection came from William Ruckelshaus, the first U.S. EPA administrator, recalling the early 1970’s when he worked in the Nixon administration to pass the historic Clean Air Act.

He continued: “The result of this was a public deeply concerned about the environment, and a Congress which gave into public demand by setting federal laws to regulate emission levels.” Ruckelshaus was speaking at a roundtable discussion this week hosted by the World Resources Institute, moderated by Senator Tom Carper (D-Del.) and Senator Lamar Alexander (R-Tenn.). The event featured Ruckelshaus and former EPA Administrator William Reilly, as well as business and public health experts.

Watch highlights of the event:

“It is astonishing what the Clear Air Act has achieved in its 40 years of history,” said Mr. Reilly, who served under President George H.W. Bush. “The reason we’ve been so successful in addressing environmental problems is because of the extraordinary bipartisan support that the initiatives have really had up until the mid-1990s.”

There was broad agreement among the participants about the benefits of the Clean Air Act and its legacy of cleaning America’s air and protecting people’s health.

Later, he continued, “We see how clean air makes a difference not just in health, but in visibility - so we enjoy the mountains – and in creating jobs, whether it’s tourism or auto plants.”

The participants, however, were not in full agreement about the best way to address toxics and other air pollution moving forward.

Sen. Alexander argued that Congress should be taking a stronger role in controlling air pollution. “I think Congress ought to step up to their responsibility, which is clean air laws,” he said.

Sen. Carper, however, questioned if a Congressional route would be the best approach. Considering recent political dynamics, he remarked, “Having failed in getting legislation done in 2004, 2006, 2008, 2010, and now to go back and legislate again. I am not sure that’s the smartest thing for us to do with our time.” 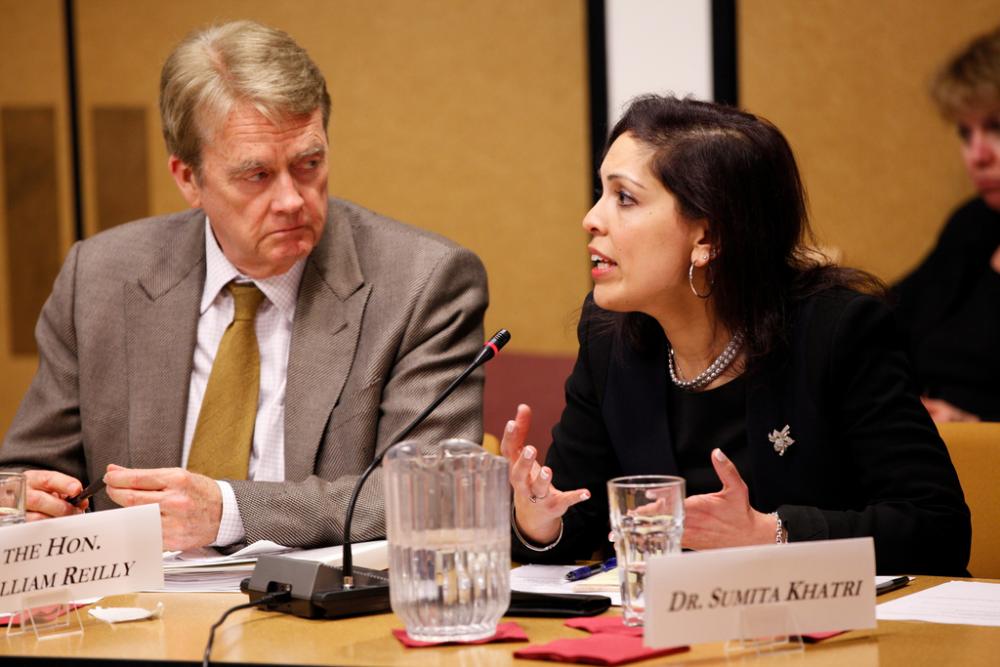 Reilly also noted that protecting air is not just about traditional air toxics, but also the looming threat of climate change. He remarked, “I really do think now that if we can’t address mercury and some of these more obvious emissions threats, addressing what really strikes me as the most dangerous one lurking out there in the future – climate change – is going to be nearly impossible. Congress really should be leading the country and preparing the country for that inevitable consequence of climate change.”

The panel also featured Ralph Izzo, Chairman of the Board, President, and CEO of PSEG, one of the ten largest electric companies in the United States; Dan Greenbaum, President and CEO of the Health Effects Institute, and Dr. Sumita Khatri, Co-Director of the Asthma Center for the Cleveland Clinic.

Mr. Izzo discussed the need for clarity around the rules, so that utilities and other businesses could make strategic, long-term decisions to meet regulations. He argued that air standards could both help create jobs in the short term and drive innovation over time.

“Clarity and timing of regulation are so important to a company like ours,” said Izzo. “We’ve spent 1.3 billion dollars getting prepared for the Clean Air Act amendments of 1990 and have very little tolerance for an industry saying, ‘No, no, no, we need more time.’ We put our money to work. We are prepared to work. But it has to be on a level playing field and on a fair basis.”

There was broad consensus around the importance of improving air quality to protect public health.

Dr. Khatri provided her personal perspective as a doctor in Atlanta and now in Cleveland. “Clearly, when there is an issue with air quality, there are increased lung and lung disease issues,” she said. “Asthma metrics are essentially like having a canary in the coal mine; when others may not notice problems in air quality, asthmatics are the first to detect it.”

Extraordinary Progress, But More to Do

Clearly, the country has come a long way since the early 1970s, but still more should be done to ensure we have clean air and to protect public health.

Sen. Carper provided some compelling concluding thoughts: “We have made extraordinary progress in this country with respect to the quality of our air. Is it perfect? No, it’s not perfect. Is it better? It sure the heck is. Can we do better still? Yes, we can. And the question is, how can we do that in way that is both respectful to better health and also not oblivious to cost and a cost-benefit ratio.”

We are hopeful that this dialogue – which was refreshing in its respectful and thoughtful tone – can help drive a constructive dialogue both in Washington and across the country about the accomplishments of the Clean Air Act to date and how to meet clean air challenges into the future.