Shale gas is a game-changer for global energy supply. It is already transforming the U.S. energy outlook, and is expected to deliver over 40% of domestic gas production by 2025 (Figure 1). Other countries and regions, notably Europe and China, may soon follow suit, in a repeat of the early 20th century oil rush.

Opinion is bitterly divided, however, over the environmental risks and benefits of this abundant new source of energy – so much so, that the different sides struggle to agree even on basic facts. The debate is raging over two key issues – on-the-ground impacts to water, air, communities, land use, wildlife, and habitats; and the broader energy and global warming implications of developing shale gas. Attention so far has focused on the local impacts of shale gas extraction through the rock-blasting process known as hydraulic fracturing (or “fracking”). The Secretary of Energy's Advisory Board Subcommittee on Shale Gas Production has warned that “disciplined attention must be devoted to reducing the environmental impact” of shale gas development in the face of its expected continued rapid growth, with as many as 100,000 more wells expected over the next few decades.

The direct impact of shale gas on global warming is another bone of contention. While the combustion of natural gas results in less carbon dioxide emissions than combustion of coal per Btu, the production and distribution of natural gas also causes leakage of methane, a potent greenhouse gas. This increases the lifecycle greenhouse gas emissions of shale gas, reducing the global warming benefits compared to coal.1 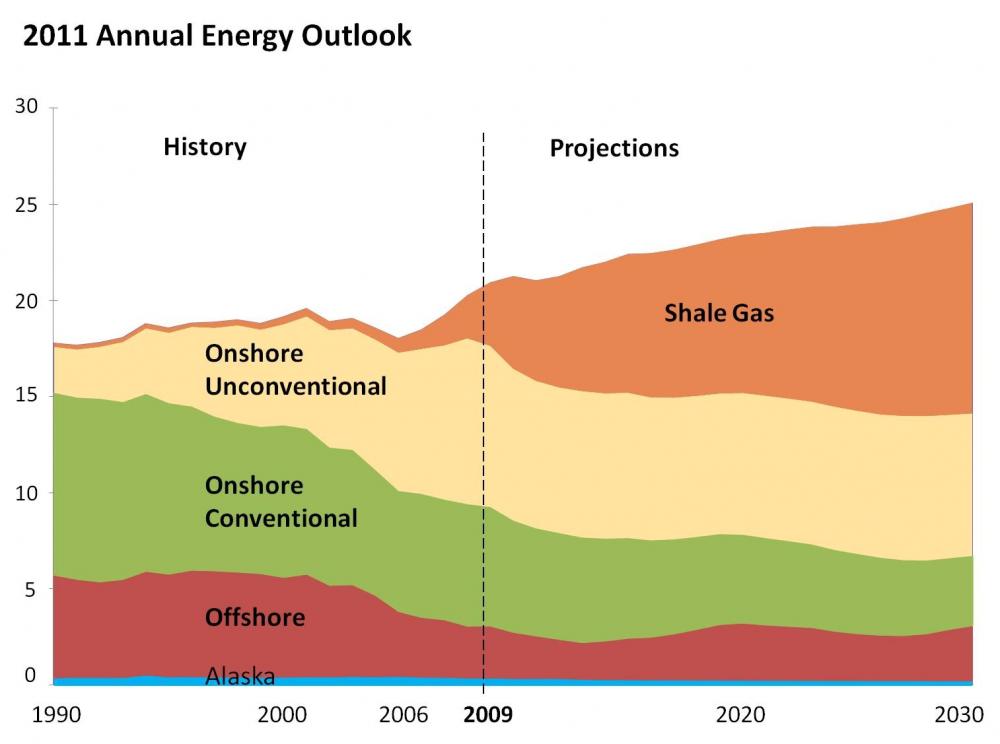 In addition, a comparison that simply replaces coal with gas in electricity generation ignores the broader greenhouse gas implications of the shale gas phenomenon. One particular concern that policy makers should focus on is the potential impact of the shale gas boom on the renewable energy industry. Unless the federal government sets a price on carbon, the growing U.S. reliance on natural gas could squeeze out zero emission energy sources like wind and solar power. This could in turn undermine, and increase the cost of, U.S. efforts to address climate change.

The debate over shale gas development provides a strategic opportunity to engage policy makers, both on the long-term role of natural gas in the U.S. and beyond, and on how to integrate climate change considerations into economic development and energy policy.

The World Resources Institute (WRI) will use its well-established roles as policy analysts and honest brokers to inform public policy on shale gas and dispel the confusion and competing claims surrounding its impacts. We will conduct independent, objective analysis in two key areas:

We expect to publish preliminary findings in early 2012. Based on these, we will develop recommendations for regulatory policies and best practice approaches to minimize lifecycle emissions from shale gas extraction. Our goal is simple: to ensure that the emerging industry supports rather than hampers the global transition to a low carbon future.

WRI will also seek to bridge the growing divide over this issue by seeking input from industry, government, environmental and community representatives from the United States and other shale rich countries, including China. We will solicit their help in two ways.

First, we seek stakeholder engagement in developing a framework for assessing the environmental impacts of shale gas. This work will underpin our initial greenhouse gas analysis of shale gas, and could also be applied in future to impacts on water or land. (We will not focus our initial efforts on water pollution or other local impacts, since others are already covering this ground). Second, we will engage stakeholders in developing consensus approaches to shrink the lifecycle greenhouse gas emissions of shale gas production.

In an increasingly energy-hungry world, shale gas may seem to offer a secure and economical path forward. But it is vital that we understand its potential to harm as well as to help humanity.

Impacts on local communities should not become an acceptable trade off for boosting domestic gas supply. And at the national and global levels we must put in place the conditions to drive reductions in lifecycle emissions from shale gas and ensure that it complements rather than displaces cleaner alternatives such as wind and solar.

It is time to take a closer look at shale gas before we leap any further.