As the year winds down, it’s a good time to take stock of climate policy in the United States. Here’s a quick round up of what happened -- or didn’t happen -- in 2011.

The year began with big questions about what the Obama Administration and states would do to address climate change and clean energy, absent a comprehensive federal climate policy. This year’s record was decidedly mixed. Not as much happened as some would have liked, but it was in total better than many feared as the year began. The clearest objective benchmark is how well the U.S. is doing against the administration’s target of reducing emissions 17 percent below 2005 levels by 2020. Our assessment is that the administration is making progress to keep the 17 percent target within sight, but it will require a sustained effort in 2012 and beyond to reach the goal. WRI has been tracking the actions by U.S. federal agencies – click on the pie chart below to explore the interactive tool.

Click to explore emissions, reduction scenarios, and agency actions with our interactive tool.

Coming into 2011, a big question was how far Congress would go (and how far the administration would go along) in slowing or stopping action by the EPA and other federal agencies. While the House repeatedly approved anti-environment and anti-climate measures, those efforts did not make it through the Senate. In a sign of strength, the administration has consistently signaled that President Obama would veto such measures if they ever got to his desk.

Another question was what would happen as a result of President Obama’s call in the State of the Union address for a clean energy standard that would set a goal of generating 80 percent of the country’s electricity from clean energy sources by 2035. While the Senate Energy and Natural Resources Committee issued a white paper for comment, no further action was taken. Senator Bingaman, the committee chairman, has indicated that he intends to introduce clean energy standard legislation in 2012.

The biggest bright spot on the domestic climate front was the administration’s announcement that it would raise national vehicle fuel standards to 54.5 miles per gallon. These standards for cars and light trucks will reduce U.S. emissions from vehicles by nearly 50 percent by 2025. The EPA and the Department of Transportation (DOT) finalized greenhouse gas (GHG) emissions standards and efficiency standards for vehicles with model years 2012 through 2016, and proposed new standards for model years through 2025.

In addition, EPA and DOT finalized the nation’s first ever efficiency standards and GHG emissions standards for medium- and heavy‐duty vehicles such as tractor trailers and buses. The EPA estimates that these standards will reduce CO2 emissions by 270 million metric tons over the life of the vehicles covered by the rules.

California continues to implement its comprehensive statewide climate program, which combines targeted measures to achieve emission reductions in particular sectors with a broad multi‐sector GHG cap‐and‐trade program. California has one‐eighth of the national economy and is the eighth largest economy in the world, so action in California is significant.

The regulations governing the cap‐and‐trade program were finalized this year, setting the stage for the system to come into operation in 2013. As part of the Western Climate Initiative, California is looking to link its program with that in Quebec starting in 2013, and with programs in Ontario and British Columbia once those are established.

The first compliance period will soon be coming to a close for the Regional Greenhouse Gas Initiative (RGGI), a greenhouse gas cap–and-trade program for the electricity sector in the northeastern and mid-Atlantic U.S. A recent analysis concluded that RGGI has injected $1.6 billion into the region’s economy and created 16,000 jobs, while reducing energy bills by $1.3 billion. A key driver of this success has been the region’s investment in energy efficiency.

While New Jersey’s Governor Chris Christie has announced his intention to withdraw New Jersey from RGGI, it is not clear if that will go through. Meanwhile, the other nine states are currently undertaking a program review that could lead to program enhancements, such as an increase in stringency. 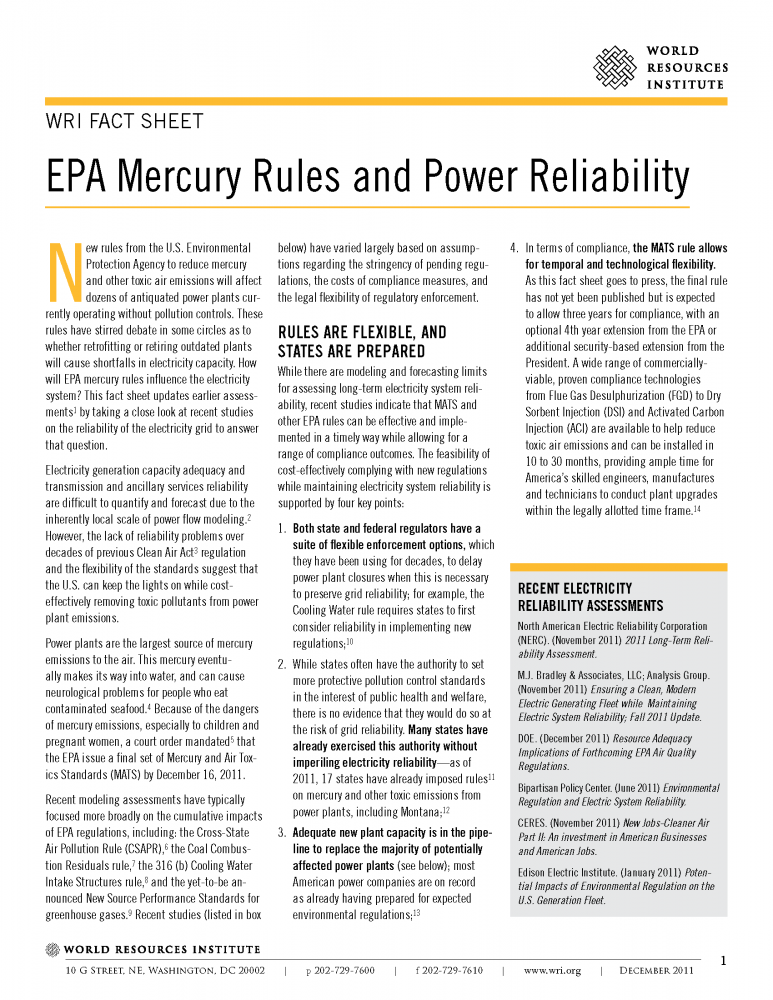 EPA has continued to move ahead with most of its planned regulations on power plants, which produce about one-third of U.S. GHG emissions, though it has not met all of its deadlines. EPA is scheduled to release GHG rules for the power sector, originally due out in June, 2011, in early 2012, though these are expected to cover only new power plants. It is not clear when the more important guidelines for existing plants will be issued. The implementation of these rules will be an important marker to watch if the country is going to reach the 17% reduction target.

EPA also moved forward with regulations to reduce other forms of pollution from power plants, such as mercury, SO2 and NOx. These rules could lead to greenhouse gas benefits by promoting generation from cleaner, more efficient power plants over generation from older, more polluting ones. However, in a major setback for environmental protection and public health, new rules for ozone were delayed until 2013 In addition, in July, the EPA proposed a suite of regulations that would reduce harmful air pollution from the oil and natural gas industry. While the rules focus on reducing emissions of volatile organic compounds, they are expected to substantially reduce the emissions of methane, a very potent GHG, from oil and gas operations, including from hydraulic fracturing (“fracking”) to produce shale gas.

While the global economic downturn resulted in reduced GHG emissions in 2009, that trend is no longer the case. In September, the International Energy Agency reported that 2010 was a record year for emissions globally. The recent rise in emissions highlights the need for further action by the United States to go further in reducing emissions.

Time will tell if the country meets its 17 percent target. New climate and energy legislation would make the target easier to reach, but even without legislation, we believe this is still possible with sustained effort. And we’ll be watching to see how far Congress and the administration get in 2012 and beyond.