In the United States, there is a heated debate about how much government should support renewable energy innovation. While you won’t find anyone who says they don’t value ‘innovation’, the U.S. federal investment in energy innovation across both fossil and renewable technology is still anemic, badly trailing China and only about one third of the amount recommended by the President's Council of Advisors on Science and Technology. That’s unfortunate, because there are compelling reasons to accelerate innovation in the energy sector, and specifically in renewable energy.

Letha Tawney will speak at the Energy Innovation 2011 conference on Thursday, November 17 about WRI’s work on seizing economic opportunities in the low-carbon transition through an innovation-driven strategy. WRI is co-sponsoring the conference, which will explore ways to spur clean energy innovation, build the green economy, and deliver carbon reductions in the face of stark budget realities. To register, click here.

Innovation – improvement in products like batteries, processes like planning where to place wind turbines on a hillside, and business models like leasing solar panels to homeowners – is a reliable way to drive down the cost of energy and reduce its environmental impacts. WRI’s recent fact sheet The Power of Innovation illustrates how the prices of solar photovoltaic (PV) panels and onshore wind power have declined substantially since the 1980s. While trends like the rise and fall of silicon or steel prices impact these costs in the short-term, the long-term decline is driven primarily by innovation.

Innovation is more than scientists working on cutting-edge technologies in a lab. It also happens on the manufacturing floor and out in the field. Sometimes this is called ‘the learning curve’ – prices drop as we figure out the best way to do something like build and ship a turbine blade. Even achieving economies of scale involves innovation. Discovering the best batch size for a manufactured product like silicon wafers, or the optimal technician-to-wind-turbine ratio to maximize uptime and minimize cost, requires innovations in business models, supplier relationships, and maintenance procedures. 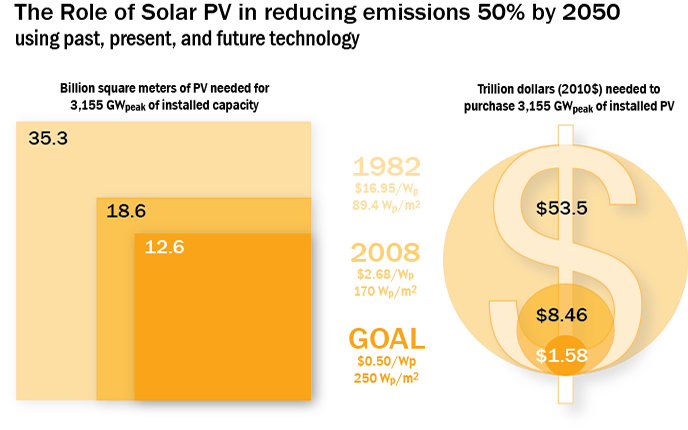 In addition to shaping cost, innovation can also catalyze substantial improvements in performance. Today solar PV modules can generate almost twice as much power for their size compared to 1982. Similarly, one wind turbine manufactured today can capture as much energy as 80 turbines made in 1985. Moreover, tremendous improvements have been made in how we site, operate, maintain, and integrate these power sources to squeeze every last drop of energy out of them. All of these performance improvements and efficiencies are driven by innovators.

Many supply and demand factors impact energy costs, sometimes increasing and other times lowering them. Innovation is one of the few ways to steadily bring down costs or improve performance – or both – over time. It may be impossible to predict exactly when an innovation will be successful, and indeed many will fail. But, as the American Energy Innovation Council (a group of seven of the top innovators and corporate leaders in America, including Bill Gates) writes, “At this point in history, securing clean, scalable, and inexpensive energy supplies is a high-stakes innovation challenge.” 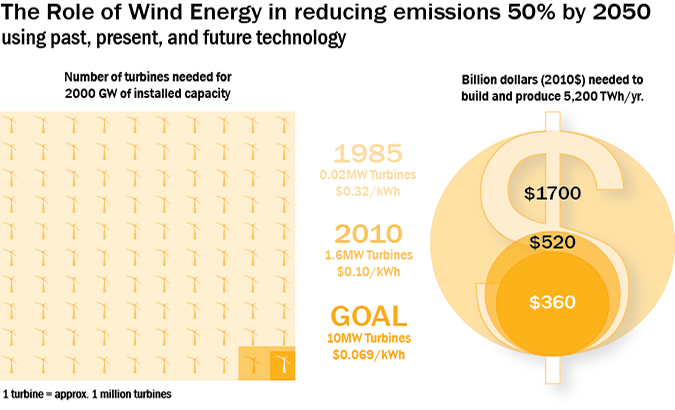 This is why governments around the world are investing in energy innovation. As WRI’s working paper Two Degrees of Innovation shows, policymakers do play a critical role in supporting innovators and innovations, particularly in the highly regulated electricity marketplace. The price declines seen so far in onshore wind and solar PV were made possible through government policies like feed-in tariffs and electricity market reforms and investments like the U.S. National Renewable Energy Laboratory and the German Fraunhofer Institutes. Costs must be reduced even further so that solar and wind power can compete with coal and natural gas in electricity. The innovators who successfully do so will find a tremendous opportunity open to them, a market the IEA estimates will be $US 5.7 trillion (2009 dollars) between 2010 and 2035. Economies all over the world are competing to make sure they host future successes. Whether Germany’s High-Tech Strategy 2020 or India’s Solar Mission, they are putting supportive innovation policies in place today.