This week, WRI is joining Céline Cousteau to celebrate the life and legacy of Jacques Cousteau – a man who opened the world’s eyes to what lies beneath the sea.

Jacques Cousteau helped usher in generations of ocean advocates, scientists, and explorers – people committed to understanding and protecting underwater life. I remember as a child watching his adventures as he dived and filmed in the world’s seas. I still have a copy of his classic The Silent World on my bookshelf, tattered by numerous re-reads. Until he came along, the mystery and beauty of the deep was hidden from but a few. After he was here, the value of the oceans was clear to us all.

Recognizing the value of the oceans has been a major motivation behind the World Resources Institute’s work to examine threats to the “rainforests of the sea” ― coral reefs. Coral reefs provide an array of benefits to people around the world, including jobs, income from tourism, shoreline protection, and much more. WRI’s original groundbreaking study of coral reefs, Reefs at Risk, was published in 1998 – just a year after Jacques Cousteau passed away. And, in March, WRI released an updated and even more thorough analysis of the threats to coral reefs – Reefs at Risk Revisited– using the latest satellite data and mapping technology.

The report found that 75 percent of coral reefs are under threat today from a mix of local and global pressures. Without further action, these threats are on course to rise dramatically in the coming years. Reefs at Risk Revisited also looks at the vulnerability of people living in reef dependent areas. As reefs degrade, the livelihoods of millions are at risk from declining supplies of reef-based food and lost income. The report has garnered considerable attention, but more needs to be done to raise awareness and motivate greater protection of reefs and the value they hold.

That’s why WRI is joining up with Céline Cousteau, the granddaughter of Jacques, to host additional events this week to raise awareness of the threats to reefs and oceans more broadly. These events, called Ocean Inspiration, are a once in a generation opportunity to celebrate the life of Jacques Cousteau and recognize ocean advocacy in all its forms. [Click here to read a new Q&A with Céline, and see a family slideshow.]

The events kick-off on May 18 with “Celebrating the Oceans,” a gala at the Sea Grill (Rockefeller Plaza) in New York City from 6:30 p.m. - 9:30 p.m. Emceed by Today Show anchor Amy Robach, the event will include the presentation of Ocean Advocate Awards by Céline, a tribute film to Jacques by his son Jean-Michel, and a profile of WRI’s Reefs at Risk Initiative. The gala will include a live auction of an exclusive Patagonian Eco-Adventure, a private whale watching excursion in Massachusetts, a La Prairie spa package, and more. You can register for the event here (your donation will support Ocean Inspiration and WRI’s Reefs at Risk work).

Ocean Inspiration continues on May 20 with “Looking to the Future,” a public forum in at WRI’s headquarters in Washington, D.C. from 11:00 a.m. - 2:00 p.m. The forum, moderated by Céline Cousteau, will kick-off with a conversation about the future of the oceans featuring world-renowned marine scientists and advocates, including Dr. Carl Safina and Dr. David Guggenheim. It will follow with three Calypso alumni sharing inside stories of Cousteau expeditions. The forum will be a unique opportunity to hear from top ocean advocates and first-person stories from people who worked alongside the world’s most famous ocean explorer.

Jacques Cousteau’s passion for oceans and exploration still serves as an inspiration for everyone who cares about our blue planet. We hope that these events will honor his legacy and help inspire a new generation. 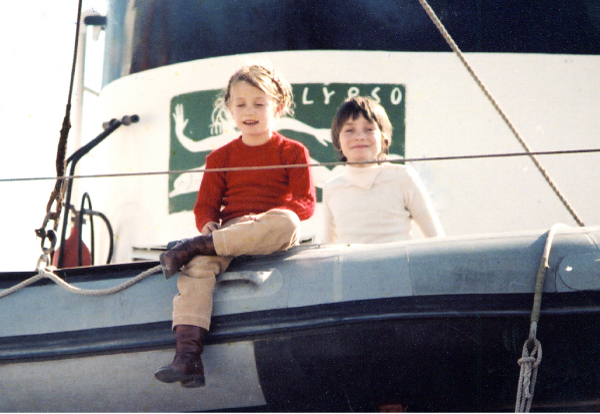 Here I am sitting on a Zodiac raft while it hangs on the Calypso docked in port somewhere. I’m about 5 or 6 years old and that’s my brother Fabien in the background. The Zodiac is an inflatable boat the crew would use for diving and making runs if you couldn’t bring the ship into port. 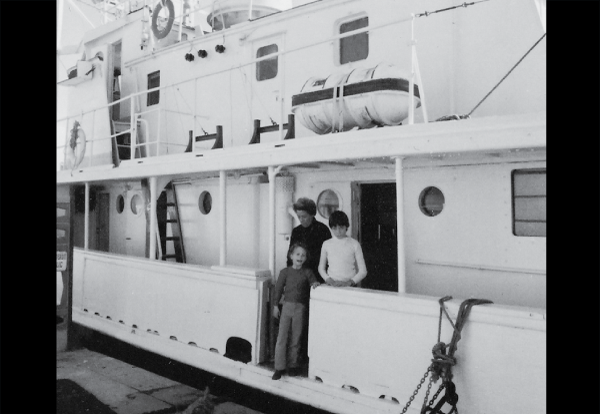 This is my grandmother Simone, my brother Fabien and me walking out of to the mess hall on the Calypso. You can barely see, but my grandmother’s dog Ulysses is coming to greet us on the dock. 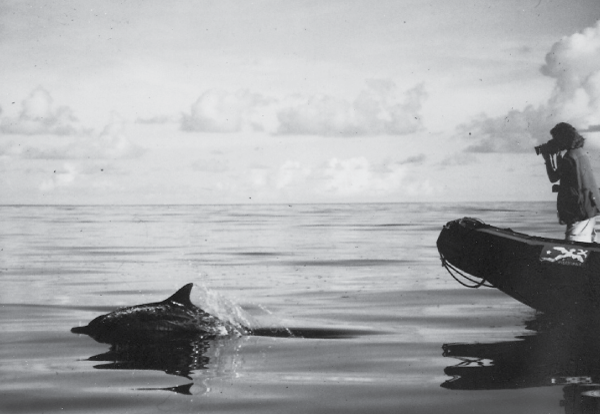 I love this picture of my mother photographing a dolphin on expedition with the Calypso crew. She’s standing on the Zodiac and could be just about anywhere in the world. She was an expedition photographer for 13 years and a lot of my inspiration came from seeing her photos when she would arrive home. 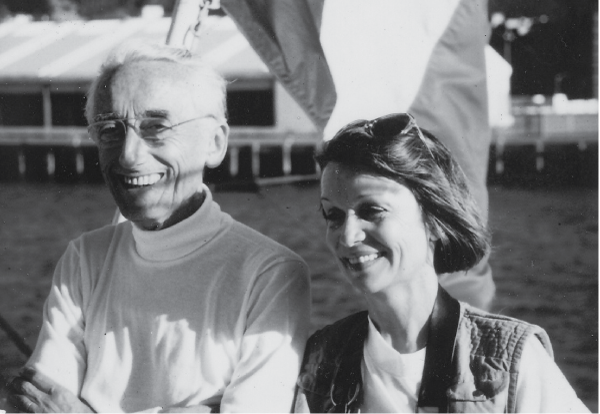 My Grandfather and Mother

This is a great picture of my mother and grandfather in France; the well known public figure and the one who often captured his face on film. 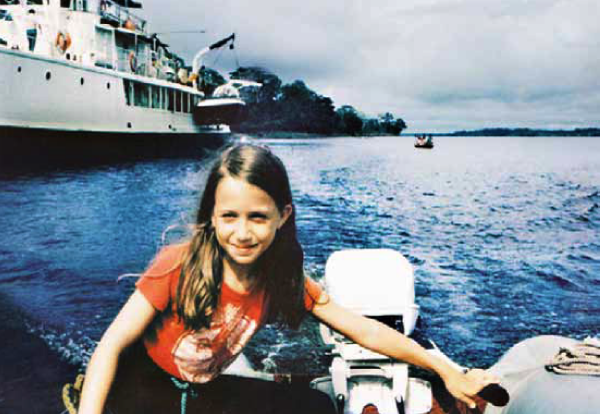 When I was 9 I spent two weeks on an expedition with my grandfather and the crew in the Amazon. Each day they would take me on "child-approved adventures." Since that trip, the Amazon is a place I hold very dear to my heart. I worked on a documentary called “Return to the Amazon” with my father and brother about my grandfather’s expeditions there. I also returned to film my own project about a non-profit bringing medical attention to remote areas of the Peruvian Amazon. 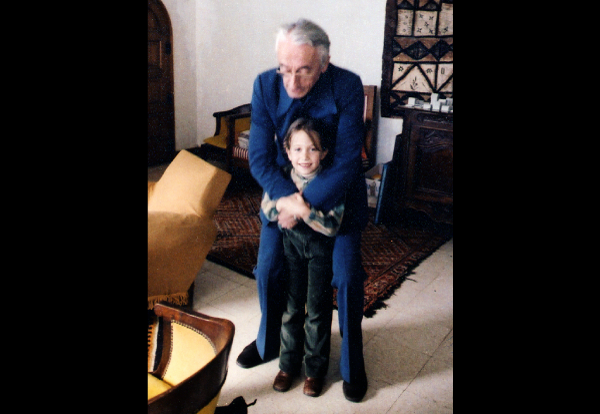 This picture of my grandfather and me was taken in the south of France at our home, in Sanary. My grandparents built that house in the early 1940s and it is still in our family. We spent some summers there when I was growing up, my family lived there for a year, and I’m actually moving back there this summer to work on various projects for a few months. 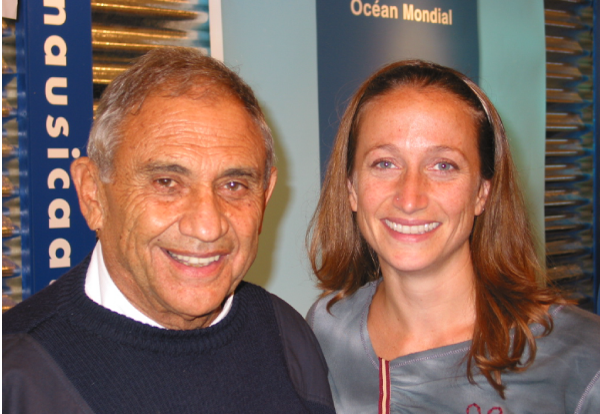 Here I am with Albert Falco, my grandfather’s right hand man, at the Antibes film festival a few years ago. He is still diving today - we just went diving together on my grandfather’s 100th birthday in the South of France with Fabien, Jean-Michel and members of the original Calypso crew.