Two entrepreneurs recognized a business opportunity in Mexico, where recycling rates lag far behind those in Europe and the United States.

One man’s trash may be another man’s treasure, but in the case of YoReciclo, a company supported by New Ventures Mexico, one man’s trash is another man’s business opportunity. YoReciclo, Spanish for “I recycle," is in the business of collecting what was once perceived as trash—paper, cardboard, plastics, aluminum, steel, glass, and electronics. It makes its profits by selling these materials to paper mills, plastic manufacturers, steel smelters, and glass manufacturers for reuse.

A Business Opportunity in Recycling

The entrepreneurs behind YoReciclo, Luis Duarte and Hector Elizondo, recognized a business opportunity in Mexico, where recycling rates lag far behind those in Europe and the United States.

The two YoReciclo entrepreneurs joined forces after discovering they both wanted to return to Mexico, their home country, to boost its nascent recycling efforts and contribute to its “green” growth. Commercial recycling collection programs are uncommon in Mexico, and the recycling rate is a mere 3% of municipal waste, compared to 24% in the U.S. and around 35% in many European countries. While the recycling rate in Mexico may seem disheartening, to Duarte and Elizondo it presents a market for growth.

They designed their business to create positive environmental impacts alongside profits. YoReciclo develops recycling programs for schools, businesses and other institutions. YoReciclo’s clients increase recycling and thus benefit financially from reduced waste collection fees. YoReciclo is able to generate revenue by selling the recycled materials from its clients to material processors.

Finding the Right Strategy to Grow

Although Duarte and Elizondo designed a viable business model, they initially struggled to attract clients. The clients that they did sign up did not yet generate enough revenue from their recyclable material to allow YoReciclo to grow. YoReciclo, like many other small and medium enterprises (SMEs) in emerging markets, did not have a clear growth strategy. New Ventures Mexico, which specializes in helping environmental SMEs scale, advised YoReciclo to change its growth strategy and find a different source of revenue in its early stages. 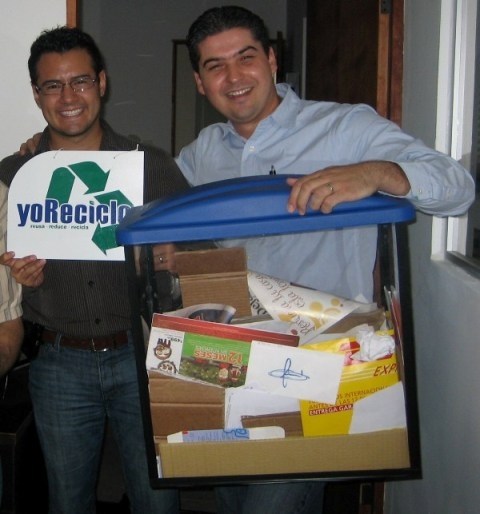 YoReciclo initially focused solely on finding new clients and creating revenue from recycling these clients’ waste. After working with New Ventures Mexico, the company began purchasing recyclable materials directly from recicladoras, collection centers that are supplied by waste pickers, in their first year of operations. YoReciclo then cleaned, sorted, and sold that material at a higher cost to generate revenue. This new, temporary revenue stream provided the company with the resources to effectively recruit new clients and succeed with their initial business model. Duarte notes, “[Our mentors] helped us reach equilibrium much faster. Once we reached equilibrium [and were not operating at a loss], we were able to focus again on recruiting new clients and recycling programs.”

With the revenue from recicladoras to keep YoReciclo afloat, the company was able to build their client base from one client to fifteen by the end of its first year of operations, demonstrating the company’s market potential. YoReciclo’s success stems from a joint effort—a combination of Duarte and Elizondo’s vision and passion alongside the support and advice of the New Ventures Mexico team and mentors. Duarte credits YoReciclo’s New Ventures mentors for helping his company avoid big losses early on. Now, YoReciclo is well-positioned and poised to grow, demonstrating the value of business mentoring to SMEs that may otherwise struggle to survive.

As YoReciclo grows, it will be able to expand its already considerable environmental impacts. The company’s first customer increased the quantity of recycled materials by 900% over the course of one year. YoReciclo has to date recovered 1,922 tonnes of material, which in turn saves millions of liters of water and kilowatt-hours of energy from the avoided use of virgin materials. Employees from institutions that have implemented YoReciclo recycling programs even bring recycling from home to their workplace. YoReciclo has begun to create better environmental management at both individual and institutional levels in Mexico.

Luis Duarte says, “We have both worked in big and small companies and government, and in none of those jobs do you feel this much satisfaction—huge satisfaction that every day you are leaving a better place for your kids. We love this project, what we are doing, and the results.”