For the last five months, a severe drought in central China has brought water levels in the Yangtze River to near-record lows. The drought’s impacts -- from threatened drinking water supplies to disruptions in manufacturing -- have rippled through the population and economy of China. They are a reminder of the diverse and complicated ways in which water, or the lack thereof, can pose risks for companies, investors and policy makers. * Watch an interview with Robert Kimball on Voice of America

Although companies and investors are becoming increasingly aware of the importance of water in the 21st century economy, many still struggle to evaluate where and how their assets, suppliers or product markets can be impacted by water risks. Something as simple as a prolonged lack of precipitation and resulting low river flows has exposed businesses in China to a variety of tangible financial risks, including:

Companies and other water users seeking to measure and manage their exposure to water risks like the ones listed above must employ a nuanced approach. Simply looking at how much water is available, or measuring how many gallons you use (your “water footprint”) is only a start. A proper risk assessment requires data on the physical, regulatory, and socioeconomic factors that contribute to water risk. The information must also be high resolution – water problems are inherently local and vary widely from place to place, even within a country or region.

WRI’s Aqueduct project aims to provide the comprehensive, high-resolution data needed to measure and map the complexities of water risk. By combining advanced hydrological modeling on the physical availability of water with extensive data on other drivers of water risk (such as consumption, governance, and competing users) Aqueduct helps users identify, measure, aggregate and map the water risks they face in targeted river basins around the world. An initial prototype of Aqueduct’s risk mapping tool is already available for the Yellow River basin in China, and work is underway to expand the scope of the tool to basins worldwide, including the Yangtze and the Colorado. 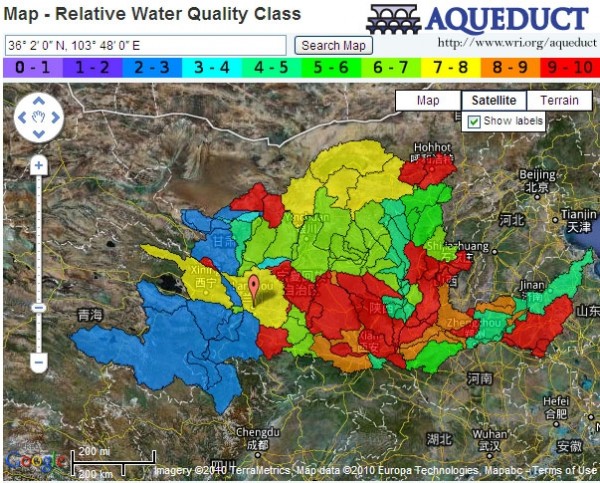 Aqueduct’s approach acknowledges the fact that different types of companies, investors, and water users are exposed to different water risks. The examples from China are a clear demonstration of this concept: for one company, a drought may mean interrupted shipping, while for another it may mean disruptions in power supply. Aqueduct’s applications are customizable, giving users the flexibility to study only the risks that they face directly.

With growing populations demanding more and more water, and climate change expected to increase the frequency and intensity of extreme weather events, companies, investors and governments around the world must prepare to come face to face with the economic and business risks associated with water. The vital first step is to understand what these risks are, and where they are the most pressing. The comprehensive, high resolution water risk maps produced by Aqueduct will help users understand the risks and opportunities of an increasingly water constrained world.

The Aqueduct project is supported by an alliance of partners that includes General Electric, Goldman Sachs, The Coca-Cola Company, Talisman Energy, Bloomberg, Dow Chemical, and United Technologies. To learn more, and to see a working prototype of the Aqueduct water risk mapping tool, visit www.wri.org/aqueduct