Scenario exercises look at the how and why of decision-making for climate change.

From private corporations to the military, a host of institutions use scenario exercises as a way to prepare for different possible futures. Given the many risks and uncertainties associated with rising global temperatures – from extreme weather events to changing seasons, to long term sea level rise – they can also play a valuable role in climate adaptation planning.

Take Ghana. Between now and 2050, predictions suggest that yearly rainfall in the West African country could plummet to 60% less than it is today or increase by as much as 49%. Given such uncertainty between scarcity and abundance, how can the government decide how to manage future water supplies and agricultural development? How should national ministries plan for a key sector like hydroelectricity generation?

This very question was addressed in a scenario exercise for senior Ghanaian officials and community and business leaders, organized recently by the World Resources Report and the Massachusetts-based Consensus Building Institute. Held in Accra, in partnership with UNDP and the Ghanaian Energy Commission, the simulation took two dozen participants to imaginary Suna, a developing country in West Africa. 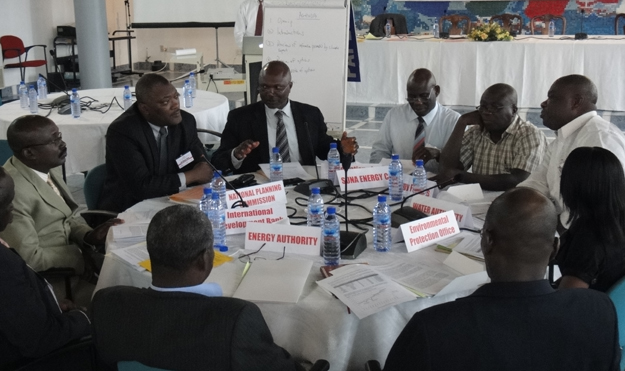 In the Ghana exercise, participants had to decide whether or not to build a dam, given vast uncertainty over future rainfall patterns. Although the situation was fictionalized, the problem is quite real for decision makers in many parts of the world. Photo credit: WRI

Groups were asked to decide, in light of future uncertainties, whether to move forward with a major new dam, decide at a later date, or cancel the project. A worst case scenario gave about a 10% chance that decreased future rainfall would make the costly dam essentially useless. Yet all the groups agreed to go ahead.

Participants at the event, sponsored by Can Tho University, played the roles of stakeholders in the fictional country of Rinsap who were asked to recommend adaptation priorities to the prime minister. Participants weighed options including investments in protective infrastructure, mangrove restoration, new agricultural technologies and techniques, and diversification of rural livelihoods. In exploring these trade-offs, participants discussed issues such as food security and economic development in the face of farmland inundation.

Two of four groups prioritized investment in new technologies to develop strains of rice and other crops that would thrive under climate change. The other groups made infrastructure their first priority. Building dikes and levees - for “protecting people and production” as one person put it – was seen as the foundation of future economic development. Restoring coastal mangrove forests was viewed as a complementary long-term response, to help protect dikes and levees.

So what do the results tell us about adaptation decision making in developing countries? While being wary of catch-all conclusions, the World Resources Report team observed the following:

The World Resources Report scenarios were designed to provide insights into how adaptation decisions are made that could provide useful for other countries, as well as to give participants experience in scenario planning for their own national needs. They are part of a broad, transparent research agenda that also includes case studies and expert papers and will be synthesized in a report to be published by the World Resources Institute, UNDP, UNEP and World Bank.

For more on the WRR Scenario Exercises, click here.