What do bacteria have to do with clean water and sustainable agriculture? Mexican entrepreneur Alfredo Suárez Rivero has built his business, AliBio, around the ability of bacteria and other microbes to treat wastewater and reduce the use of polluting chemicals in the agriculture and aquaculture industries. AliBio addresses issues such as the overuse of antibiotics in fish farming, a practice which leads to the development of antibiotic-resistant bacteria in both fish and humans.

Suárez, who previously owned construction companies, became interested in environmental issues in 1996 and found his entrepreneurial niche. He went back to university to study environment and management, and discovered the many uses for microbes. “The environmental market was just beginning in Mexico at that time, and I saw great opportunity there,” he says. “Now, sustainable food and clean water are a priority worldwide. There is nothing more forward-looking than this microbe market.”

During his studies, Suárez became fascinated with the ability of microbes to replace chemicals in wastewater treatment, agriculture and aquaculture, and consequently found the focus for his next entrepreneurial venture. These microorganisms can provide nutrients to depleted soils, reducing the need for fertilizer, and protect fish from disease, reducing the need for antibiotics. They can also remove contamination from wastewater.

“Now, sustainable food and clean water are a priority worldwide. There is nothing more forward-looking than this microbe market.”

Suárez initially tried to build his microbe business as an environmental arm of a chemical distribution company, but after several years realized that he needed to spin off his own company. In 2002, he wrote a proposal to purchase the division that he had created and crafted a business plan for AliBio, his new company. He saw in AliBio not only the opportunity to make profits, but also the chance to work on critical environmental issues.

“Water is not renewable unless we take measures to make it so,” says Suárez. “In the last century, we abused chemicals in many industries, and now we have a problem that we need to address.” 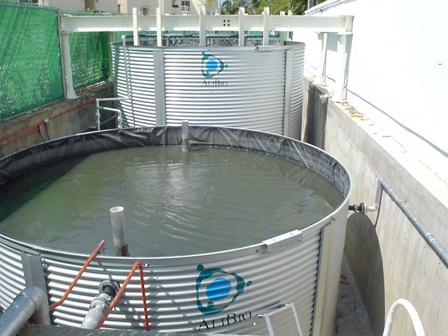 Microbes are non-toxic and non-carcinogenic, and can be used to treat wastewater. Photo credit: Alibio

All of AliBio’s products are non-toxic and non-carcinogenic, unlike some of the fertilizers and chemicals traditionally used in agriculture and water treatment.

Biotechnology has become a competitive field, but AliBio holds an advantage over other companies around the world because it works with over 2,000 strains of bacteria, while many of its competitors work with only six to ten strains. Suárez’s next goal is to take AliBio and its many strains of bacteria to a more global market. He has created a business plan to expand AliBio’s presence into six countries, including the United States. In order to enter other markets however, AliBio needs increased investment and exposure in international markets. Suárez will travel to New York City in April for the New Ventures Global Investor Forum, where he will present AliBio’s business model to a group of international investors. Suárez will look to make international contacts and secure investment for his international growth plans. “There is still a large gap in the environmental microbe industry,” says Suárez. “We hope to be the ones to fill that gap, especially now that we are going global.”

Alfredo Suárez Rivero will be attending the New Ventures Global Investor Forum: Green Opportunities in Tomorrow’s Markets in New York City on April 6 along with five other innovative New Ventures environmental entrepreneurs. Whether you are looking for a potential investment deal or hope to be inspired by the power of entrepreneurship to help solve our environmental challenges, join us for the Global Investor Forum. Visit the New Ventures website for more information and registration information.

Special thanks to all of our event sponsors and in particular our Gold Sponsors Alcoa Foundation and Fundación AVINA.