As well as urgently cutting emissions, nations everywhere need to take steps to adapt to a very different world.

Over the past year, the world has witnessed weather events on four continents so extreme that they stretch the limits of modern human experience.

Last summer’s flooding in Pakistan inundated one fifth of the country and affected 20 million people. The record Moscow heat wave led to more than 10,000 deaths, widespread peat bog and forest fires, and the loss of a third of Russia’s grain crop, driving up food prices worldwide. 2011 has already witnessed flooding in Eastern Australia that submerged an area the size of France and Germany combined, followed by the most powerful cyclone to hit the country in almost a century. In Brazil, New Year floods combined with mudslides triggered the nation’s deadliest natural disaster on record. 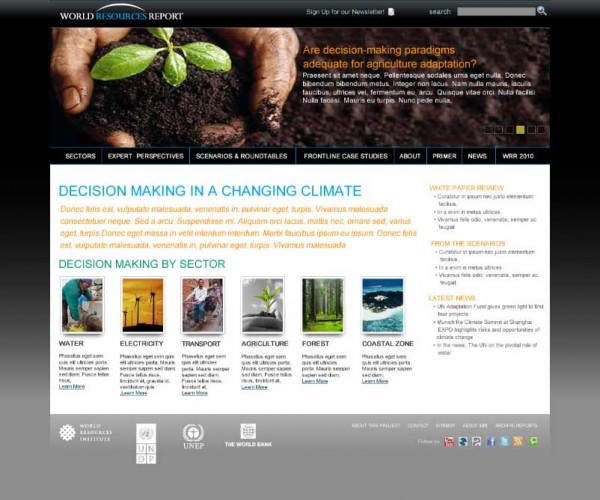 Visit the World Resources Report website for more information on decision-making in a changing climate.

It is too early to tell whether these extreme events are directly caused by human-induced climate change. What is not in dispute is that they are consistent with the broad scientific consensus that links a changing climate with more extreme events and more severe climatic cycles. Equally indisputably, the world is quickly moving towards a much hotter tomorrow.

Global average surface temperature in 2010 tied as the warmest on record. According to NOAA, it also took the honors as the wettest year since records began; a development in line with models that predict that warmer temperatures will increase precipitation. The world has witnessed 0.8˚C (1.5˚F) of warming since 1880, resulting already in significant changes to physical, hydrological and ecological systems. Yet man-made climate change has barely begun to bite. According to a recent UNEP assessment, by 2100, the world can expect global average temperature rises between 2.5˚C and 5˚C (4.5˚F-9˚F) over pre-industrial levels even if all the greenhouse gas emissions cuts pledged by countries in the UN climate negotiations are fulfilled. If these pledges are not honored, warming will be even greater.

The message for governments is clear. As well as urgently cutting emissions, nations everywhere need to take steps to adapt to a very different world. Such steps will require a fundamental shift in how most governments currently plan for climate-related impacts. Not only must we improve our ability to react to extreme weather events, and other climate-related surprises. Just as important, we must proactively prepare countries for new variations in local climate (such as altered monsoon patterns) and long-term changes (such as sea level rise) the combined impacts of which could affect vast populations.

It is imperative that governments start now to incorporate climate risks into plans and policies in sectors such as urban development, coastal planning, agriculture, water and forestry management, and electricity production. If they don’t, major investments by governments and donors may be wasted or quickly become obsolete. And the world’s most vulnerable and resource-poor societies will miss critical opportunities to become more climate-resilient. In Pakistan, for example, hundreds of millions of dollars worth of development investments were swept away in the floodwaters.

So how specifically should planners and policy makers go about incorporating climate risks into their decisions? Human society historically has not been good at forward-looking, proactive decision making. We are slow to react to, learn from, and foresee change.

While natural disasters grab the headlines, some countries are pioneering ways to plan for both short- and long-term climate risks.

Yet encouragingly, while natural disasters grab the headlines, below the radar some countries are pioneering ways to plan for both short- and long-term climate risks. Over the past year, the World Resources Report, produced by the World Resources Institute with the UN Development Programme, UN Environment Programme, and the World Bank, has engaged leaders in developing countries to learn about such efforts.

Important lessons are emerging, with governments using innovative policies and pilot projects to learn which interventions can effectively address different climate risks and how to catalyze such action.

It is no accident that these initiatives are taking root in poor countries with the most to lose from the many impacts climate change will throw at humanity. Indeed, the developing world, out of necessity, may lead the way in learning to live with a warming planet.