After years of delay, EPA gets back on track in issuing rules that provide a path to a cleaner power fleet.

After years of delay, the Environmental Protection Agency (EPA) is working to reduce dangerous and toxic pollutants released to the air and water by electric power plants, as required by the Clean Air Act and other statutes. Four key points about EPA’s actions are clear:

The Wall Street Journal and executives major electric power corporations have frequently suggested that EPA’s regulatory timeline is unworkable1. The largest industry trade group, the Edison Electric Institute (EEI) has produced a slide that purports to display an onslaught of new requirements for power plants.2 EEI has been distributing this slide widely on Capitol Hill where it presumably hopes to win lawmakers’ support for additional delays in EPA regulation or even a stripping of EPA’s authority.

The EPA regulatory process is far from a “train wreck.” EEI’s misleading timeline, reproduced in Figure 1, mostly consists of procedural events and activities that will not impose a direct compliance obligation on power plants. This serves only to spread confusion about EPA’s actual regulatory schedule.

WRI has identified four categories of EPA activities on the EEI timeline that are potentially misleading. When these activities are removed, only the timing of actual new compliance obligations is left. In Figure 2, “X”s (color coded for each filter in the screening process) have been applied to remove events from the figure that are not consequential from a compliance standpoint. The screening filters are as follows: 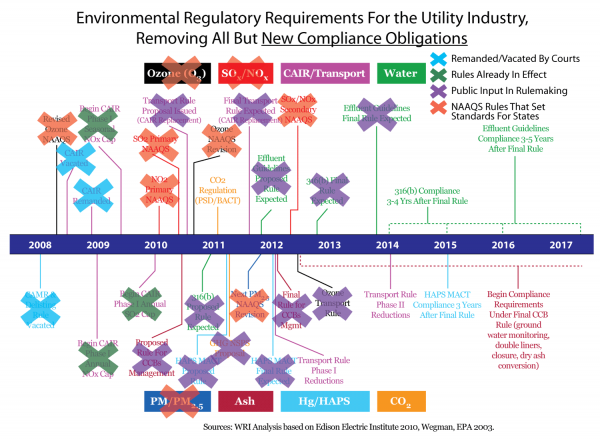 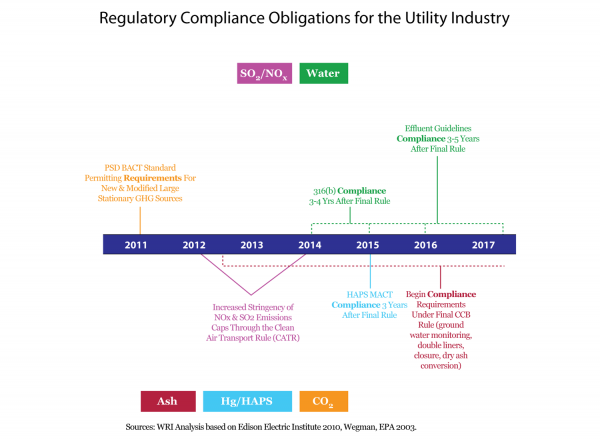 EPA is carrying out the intent of Congress (through the passage of the bipartisan Clean Air Act and subsequent amendments) to clean the nation’s air and water. These rules can help the United States transition to cleaner and more efficient power plants, by establishing a clear pathway for investments in an electric generation fleet for the 21st century.

The CAA requires EPA and states to regulate and reduce harmful pollutants from major emissions sources including power plants. To date, this framework has delivered substantial improvements in air quality and significant public health benefits estimated between $77 and $519 billion annually4. Over the next decade, power plants will be subject to new rules under the CAA as well as the Clean Water Act (CWA) and the Resource Conservation and Recovery Act (RCRA) to control substances that cause serious health problems and substantial damage to America’s natural resources. These rules will take effect after long lead times. In most cases industry has been on notice for years that these pollutants would be regulated.

The electric power sector has had substantial notice---in some cases for decades---that power plants would be subject to regulations to control dangerous pollutants.

Half of the regulations under consideration by EPA have been in the regulatory pipeline for over a decade. Due to administrative delays and litigation resulting in court decisions remanding or vacating previous rules, many of these rules have not been finalized or the final rules were reversed. In many cases Congress has set statutory deadlines for EPA to act, EPA has missed the deadlines, and courts have ordered EPA to act. Table 1 outlines the amount of time the electric sector has had to prepare for new regulations.

The case of mercury from power plants provides a good example of how much regulatory lag-time there has been for the electric power industry to prepare for new pollutant rules. The CAA required EPA to study mercury and other hazardous air pollutant (HAP) emissions from electric power plants and determine whether or not regulating these emissions would be necessary and appropriate. In 2000, EPA determined that regulations were appropriate, effectively putting the electric power industry on notice that controls on mercury would be required. EPA then proposed and finalized rules (including the Clean Air Mercury Rule) that were ultimately vacated by the courts, which found that EPA had not acted within the constraints of the CAA. EPA now intends to issue revised draft and final rules in accordance with CAA requirements in 2011. Compliance obligations would take effect in 2015.

Thus, the electric power industry has had 15 years to prepare, from the determination in 2000 to the expected date of compliance obligations in 2015.

Finalizing regulation removes uncertainty that might otherwise stymie new investments. The ultimate stringency and compliance obligations for most of the regulations EPA is pursuing will remain uncertain until rules are final. The statutes – RCRA, CWA and the CAA – establish which pollutants will be subject to regulation and the relevant legal standards; the specifics are established during the EPA rulemakings. The longer it takes EPA to finalize new pollutant rules, the longer plant operators face uncertainty as to what will be required.

Not all EPA actions will create new regulatory regimes.

It is important to note that some EPA rules do not constitute new regulatory programs. For example, sulfur dioxide (SO2) emissions from power plants have been covered by cap-and-trade programs that began in 1995. Nitrogen oxides (NOx) emissions were the subject of a cap-and-trade program covering plants in the eastern half of the country since at least 2003. The Clean Air Interstate Rule and its successor, the Transport Rule, extend NOx cap-and-trade to new states and increase the stringency of requirements for units already subject to the cap-and-trade for NOx and SO2. Power plant operators are familiar with these regulatory frameworks and are familiar with their operation. While increasing the stringency of these rules may require additional investments in control strategies, there is no fundamentally new requirement in play.

There are few, if any surprises in the very public and largely transparent EPA regulatory process. Multiple events must take place before any actual compliance obligation is imposed on an electric power plant or any other regulated entity. The EPA must issue proposed rules and seek public comment. Some rulemakings are initiated with advanced notices of proposed rulemaking, so that the process has extra opportunities for industry and public comment, and some start with studies that are conducted with public input and comment. This process allows the electric power industry to have substantial input into the shape of new regulations and allows the industry to better understand what may be required of them by EPA when rules are finalized. Fears of agency overreach are misplaced given the built-in limitations on EPA’s authority contained in the CAA.

Often rules are litigated; one outcome can be to send the rule back to EPA for further work. Many of EPA’s rules are issued on schedules established by the federal courts – because EPA has already missed the statutory deadline for promulgation. Only the final rule imposes a direct compliance obligation – after which there are practical implications for power plant owners and operators as they make investments in their generation fleets.

Why is EPA regulating power plants at all?

EPA is responding to direction from Congress to reduce the human health and environmental effects of mercury (as well as other HAPs), SO2, NOx, greenhouse gases (GHGs), coal ash, cooling water intake and discharge, industrial water effluent. Mercury is a neurotoxin that causes brain damage. SO2 and NOX cause acid rain, regional haze and can cause or worsen asthma and aggravate cardio-pulmonary disease leading to increased hospital visits and premature death. A recent example of the dangers of coal ash was the major spill of ash at the Tennessee Valley Authority’s Kingston plant in 2008 where irresponsible containment of coal ash caused waterways and communities to be inundated with waste. Electric power plants are major sources of many pollutants that EPA is regulating or intends to regulate.

By controlling these emissions using appropriate regulations under clear statutory authority EPA will go a long way towards meeting its mandate to protect public health and welfare. The electric power industry has had substantial time to prepare for regulations and once rules are final the industry will have a clear regulatory roadmap to guide investments. Misleading charts that exaggerate EPA actions such as those distributed by EEI cause confusion that will only increase uncertainty for the electric power industry and jeopardize important efforts to protect public health.

Listen to the Presentation

Listen to this presentation on AuthorStream