What are countries doing to prepare for climate change? A World Resources Report side event in Cancun highlights pioneering case studies from the developing world.

Adapting to climate change presents a monumental task for national governments, especially those in the developing world. Last week at the UNFCCC climate meeting in Cancun, our side event highlighted an array of case studies showing how countries are responding to this challenge.

Co-hosted by the World Resources Report and the Government of Norway, the event presented the first case studies that will be included in the upcoming World Resources Report – protected areas planning in South Africa, disaster management in Bangladesh, agriculture in Mali, and hydroelectricity and land use planning in Rwanda. This year’s Report focuses on climate change adaptation, and specifically how short- and long-term climate risks can be mainstreamed into governmental decision making.

Arvinn Gadgil, Political Advisor to the Norwegian Minister of Environment and International Development opened the event. Gadgil observed how human society has historically found proactive decision-making challenging, especially given the short length of political office terms. This poses a significant hurdle to contend with the long-term risks of climate change. 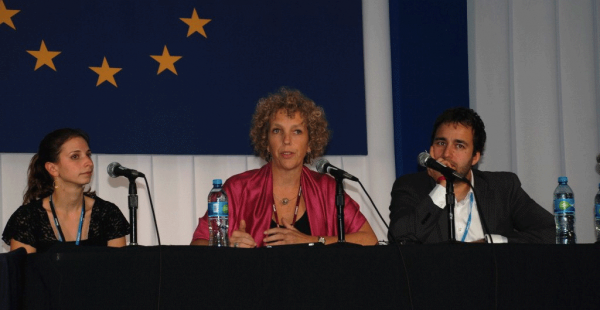 The case studies help identify the factors that enabled governments to embrace climate risks, and describe the hurdles in implementing such activities. They help tease out underlying ingredients of effective adaptation decision making.

Brian Mantlana of the South African National Biodiversity Institute described how the South African government is folding climate change risks into its protected areas planning processes with the aim to preserve biodiversity and ecosystem services. He highlighted spatial planning via the use of maps that identify the minimum areas that require protection if ecosystems’ resilience is to be maintained in a changing climate.

Abu M. Kamal Uddin, of the Ministry of Food and Disaster Management, Bangladesh, described Bangladesh’s Comprehensive Disaster Management Program (CDMP), which was developed as a result of two cyclones that had devastating effects on the population of his low-lying nation. He stated that before the Program had been instituted, a cyclone in 1991 had resulted in 350,000 deaths. However, as a result of enhanced preparedness, a similar magnitude storm in 2007 resulted in 4,000-5,000 deaths after CDMP was instituted.

Dauoda Diarra, from the National Meteorological Service in Mali, described how his government is using meteorological, hydrological and agronomic data to enhance resilience in the agriculture sector. For example, farmers receive guidance, in their local language, to suggest when to plant various species given identified climatic trends. As a result of these and related programs, agricultural yields have increased significantly: in the southern part of Mali, yields increased 25-30%, and in the northern part of the country, yields increased 40-60%. He said “the use of meteorological and climatic products for decision making has contributed to sustainable agriculture and food security.”

Jo-Ellen Parry of the International Institute for Sustainable Development outlined how a 2004 drop in hydroelectricity production in Rwanda, due to the decline of water levels in upstream lakes, led to the adoption of several policies to rehabilitate upstream wetlands, returning lake water levels over several years. She said success was due to a “cocktail” of strategies, involving various levels of authority and numerous interventions.

A New Model for the World Resources Report 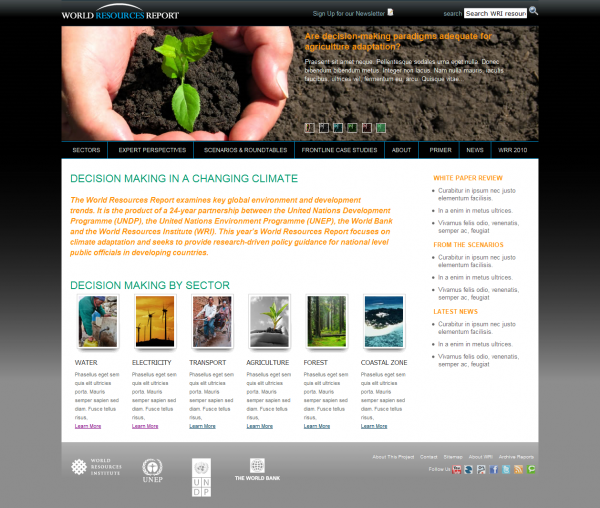 The WRR web site will be a key component of the new approach going forward.

The World Resources Report (WRR) has a 24-year history of examining key issues at the intersection of the environment and development and is a joint publication of the World Bank, UNDP, UNEP and the World Resources Institute. Jennifer Morgan, Director of Climate and Energy Program at World Resources Institute, discussed the advantages of the new model that the WRR has embraced in 2010, engaging audiences from its inception, throughout research activities, and in the eventual development of the Report’s guidance. This new approach involves a far more open, interactive, and visible process for the Report’s research, which will all be showcased online with a space for visitors to provide comments, beginning in January 2011.