The UN Secretary General Ban Ki Moon gave a stirring speech on Tuesday evening at the climate talks in Cancun, Mexico. He declared: “We do not need final agreement on all issues. But we do need progress on all fronts.” Clearly, the talks are set to move into high-gear over the coming days.

As I arrived in Cancun on Sunday, cold, mid-Atlantic weather gave way to warm breezes and clear skies. After a couple of days, I've begun to find my way around. Most of the action takes place in two venues: a new building complex (the “Cancun Messe”) and a large, modern hotel complex (the “Moon Palace”). Buses of various shapes and sizes shuttle people from building-to-building. Almost everyone I've spoken with has commented that the systems are running smoothly, even as the facilities are spread out.

So far, week two appears to be going relatively smoothly as well. There’s lots of activity and a buzz in the air. (My colleague Jennifer Morgan sets the stage for week 2, here.)

On Monday, I attended a press briefing by U.S. Department of Energy Secretary Chu, the highest ranking official attending this meeting. He gave an interesting presentation, focusing mostly on climate science and clean energy. It was easy to imagine the secretary as a professor at Stanford, as he explained point-by-point the evidence that climate change is caused by humans, including how we measure and track carbon emissions in the atmosphere that have grown exponentially since the Industrial Revolution. He was brief on specifics about the negotiations, but he did remind the audience that President Obama said the U.S. stands by its commitments made in Copenhagen last year. 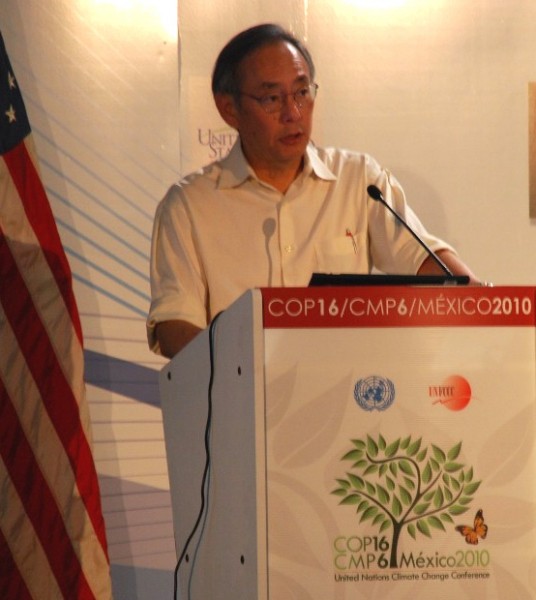 A few more glimpses on the U.S. activity came on Tuesday, as I listened to the lead U.S. negotiator, Todd Stern, at his daily press briefing. He said that he believes there’s a deal to be had in Cancun, though tough negotiations lie ahead. He rattled off some key issues: mitigation, transparency, REDD, the Kyoto Protocol, and, in particular, the climate fund. It’s become clear that moving forward on a climate fund will likely be a key piece of Cancun's final package. (You can find out more about climate finance here.)

In between meetings, I’ve been spending most of my time chatting with colleagues and reporters. Like me, reporters are outside of the negotiating rooms, and they pick up bits information from various press conferences, side conversations, and tips from NGOs. Together, we're all gathering information and looking for clues about the status of the negotiations and what the outcome will be.

Unfortunately, we won’t know the answer until the Ministers and negotiators roll-up their sleeves and make final choices sometime late Friday night or early Saturday morning.

In the meantime, one thing is very clear: the stakes are high.

As Secretary Moon said: “The stability of the global economy, the well-being of your citizens, the health of our planet, all this and more depend on you. I count on your leadership, your sense of flexibility and your sense of compromise to make this world better for all.”

As we head into the home stretch of the meetings, many challenges lie ahead, but it’s good to know that serious work is taking place and chances are still alive for a positive outcome.