Common data and clear definitions will enable the Roundtable on Sustainable Palm Oil and REDD+ policy-makers to achieve a shared goal: sustainable oil palm expansion on degraded land in Indonesia.

In May 2010, Indonesian President Susilo Bambang Yudhoyono announced a national policy to develop oil palm plantations on “degraded land”– instead of on forest and peatland — as part of an ambitious plan to reduce greenhouse gas emissions from deforestation and forest degradation (REDD+). Indonesia’s draft national REDD+ strategy, which has been made available for public consultation, reflects this intention.

The Roundtable on Sustainable Palm Oil (RSPO), comprised of over 350 members from government, NGOs, and businesses, has developed a set of principles and criteria for sustainable palm oil production. According to the RSPO, new plantations in Indonesia must not replace primary forest or reduce high conservation values and should use “previously cleared and/or degraded land.”

This November, the RSPO convenes in Jakarta as REDD+ policy-makers continue developing a degraded land national policy. This piece answers frequently asked questions by both groups and aims to provide a common factual starting point for moving the policy dialogue forward.

Who makes the decisions?

Implementation of a national policy for Indonesia will require effective participation by many decision-makers in the public, private, and civil sectors engaged in planning and management related to the palm oil sector (Table 1). Companies that have already committed to sustainable practices in accordance with the RSPO stand to benefit from—and can contribute to—this effort.

To participate in meaningful debate around this proposed policy, decision-makers across sectors need to have a common understanding of the answers to the following frequently asked questions:

Right now there is simply not enough accurate spatial data to answer these questions for the entire archipelago. This gap can be addressed by a well-designed “degraded land database” that may be developed under the Indonesia-Norway partnership on REDD+, and/or by the “spatial data management mechanism” described under Indonesia’s draft national REDD+ strategy (Section 3.2.1, paragraph 1.c).

What is “degraded land”? 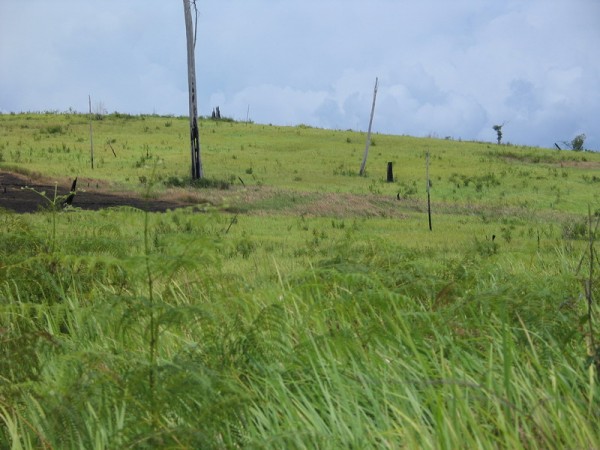 In the context of developing policies to reduce emissions from deforestation and degradation, degraded land refers to areas with low carbon stocks, typically with low tree cover.

There is no single internationally-approved definition of “degraded land” and no single corresponding definition in Indonesian law or policy. The policy dialogue regarding reducing emissions from deforestation and degradation (REDD) has suffered from this lack of clarity regarding definitions.

Land degradation is generally understood as a human-caused process that results in long term loss of natural productivity.

Forest degradation generally refers to loss of services provided by forested ecosystems, including but not limited to carbon storage.

“Degradation is the change in the forest that has negative impacts on the structure or function of stand or forest land, so that it reduces the forest capacity to provide forest services/products. In the REDD+ context, degradation may be interpreted as the forest carbon stock degradation.”

No specific level of carbon stock degradation is specified.

Government officials, private companies, NGOs, and academics have used the term “degraded” in multiple contexts to describe land with a wide variety of characteristics. General terms that have been used interchangeably with “degraded land” include:

Under WRI’s Project POTICO, degraded land refers to areas that were cleared of forests long ago and that now contain low carbon stocks and low levels of biodiversity, such as alang alang grasslands. According to a detailed economic analysis conducted by WWF and fieldwork carried out by WRI’s local partner Sekala, many of these areas have suitable soil for oil palm cultivation, can produce comparable yields relative to recently deforested land, and are viewed as unproductive by local communities.

How much “degraded land” is there in Indonesia?

If degraded land refers to areas that were cleared of forests long ago and that now contain low carbon stocks, various sources suggest that there are likely at least 6 million hectares of degraded land in Indonesia (an area larger than the Indonesian province of Aceh).

Since there is no single definition of degraded land, estimates of the extent of degraded land in Indonesia vary widely. Therefore the extent, location and status of Indonesia’s “degraded” land—particularly from a social and legal standpoint—remain unclear.

Many quoted estimates do not include sufficient information regarding how the estimates were made, or what definitions were used. In many cases, estimates refer to legal land status rather than carbon stock levels. Recent estimates related to the extent of degraded land that may be used for oil palm in Indonesia include:

To understand the possible implications of a national policy to promote the development of land that is “degraded” from a carbon standpoint will require distinguishing between terms that refer to physical status and carbon content, and those that refer to legal status.

How much oil palm expansion is expected?

Experts expect 3-7 million hectares of land will be required to accommodate expected oil palm expansion in Indonesia up to 2020.

How much land is considered “enough” for expansion will vary depending on different viewpoints regarding how much and/or whether expansion is desirable in a particular area. Considering this question on a national scale disregards critical questions related to the distribution of the costs and benefits of expansion, particularly at a local and district level.

Estimates of the current area of land under cultivation for oil palm in Indonesia range from 6-8 million hectares. Total expansion will be highly dependent on global demand, yields, and many other factors.

Recent estimates for projected or expected expansion in Indonesia by 2020 include:

These estimates suggest that there is likely enough degraded land to accommodate the expansion expected to achieve Indonesia’s production goals by 2020.

How can acceptable areas for sustainable expansion be identified?

Acceptable areas for sustainable oil palm plantation expansion can be identified using a methodology that balances environmental, economic, social, and legal considerations—including but not limited to whether an area is degraded.

Just because a tract of land is degraded does not necessarily mean that the tract is acceptable for sustainable palm oil expansion. There is a significant and growing consensus—as reflected by growing industry participation in the Roundtable on Sustainable Palm Oil (RSPO) and in recent government statements—regarding the need to balance environmental, economic, and social concerns in order to ensure that the expansion of oil palm plantations is “sustainable.” Identifying acceptable degraded areas for expansion will require that policy-makers develop a participatory decision-making process informed by accurate and up-to-date spatial data that addresses environmental, economic, social, and legal considerations.

WRI and Sekala have developed a working methodology for identifying acceptable areas for sustainable palm oil using a set of criteria that address these considerations (Table 2). This methodology consists of a desktop analysis using available data and applicable screening criteria, followed by fieldwork for verification and in-depth site analysis. WRI and Sekala are engaging with other organizations conducting similar assessments—including WWF, Conservation International, The Nature Conservancy, and Fauna and Flora International—to further develop this methodology.

Figure 1 shows another way of looking at the screening criteria:

Some areas that are acceptable according to environmental, economic, and social criteria may be currently unavailable to planters for legal reasons. For example, some of these degraded areas may be legally classified as forest where agricultural activities are not allowed. These legal barriers can be removed by policymakers. However, developing a transparent and fair process for removing legal barriers requires accurate information. Current spatial data regarding legal feasibility—such as the location of outstanding permits or other rights and claims—is often unavailable or inconsistent across multiple data sources.

How can decision-makers address these questions?

A well-designed “degraded land database” or “spatial data management mechanism” as proposed by national REDD+ policy-makers can support improved decision-making for sustainable palm oil on all levels if it:

Ensuring public access to accurate up-to-date spatial data would provide all decision-makers with a common basis for taking actions—and engaging in constructive dialogue—regarding the development of degraded land.