Three-quarters of Americans have not.

According to a recent Yale University survey, 75 percent of Americans have not heard of coral bleaching.

Yet 2010 is on pace to be one of the worst years on record for coral bleaching. Already this year, the Caribbean is showing signs of record bleaching, and there are many other examples from around the world. While most Americans may not heard of it, coral bleaching is one of the many threats coral reefs face – threats that could potentially destroy one of the world’s great ecosystems, if we don’t take steps to protect them.

What is Coral Bleaching?

Corals are highly sensitive to changes in temperature, and extreme conditions are stressful for these animals. Stressed corals expel the symbiotic algae (zooxanthellae) that usually live within their tissues. These algae are important because they use the sun’s energy through photosynthesis to provide corals with a critical source of nourishment and also give them their vivid and beautiful colors. Without the algae, the corals reveal their white skeleton beneath, causing them to appear “bleached.” Bleaching weakens corals, making them more vulnerable to diseases and other stressors. While a bleached coral can recover, if stressful physical conditions persist, it can die. 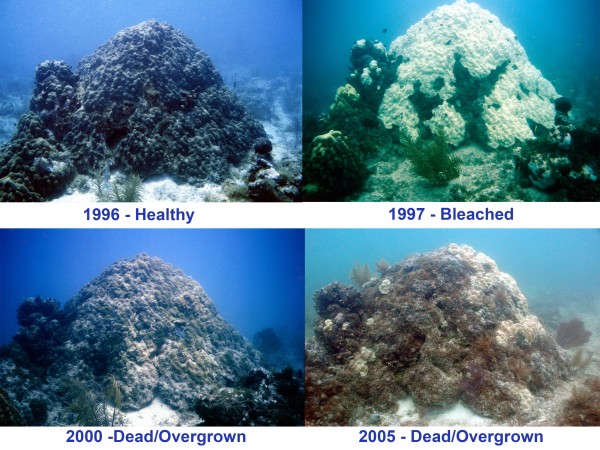 This 500 year old coral head bleached in 1997 and has yet to recover to a healthy state as of 2005. Key West, FL. Photo credit: Craig Quirolo, Reef Relief/Marine Photobank

According to NASA, thus far 2010 has been the warmest year in the past 131 years of record keeping. The above-average ocean temperatures are due to a moderate El Niño event (characterized by warm equatorial Pacific waters), which is occurring on top of rising baseline temperatures due to climate change. This is a dangerous combination for reefs that can lead to extensive bleaching. 1998 was the first year in which coral bleaching is known to have occurred on a global basis. That year a strong El Niño event killed an estimated 16 percent of tropical coral reefs worldwide.1 In the worst-hit areas, such as the central and western Indian Ocean, 50 to 90 percent of all corals died.

Recovery from bleaching events is variable among corals, and can take a few years to decades, depending on the species and environmental conditions. As shown in the figure below, the number of countries reporting severe coral bleaching since 1998 has increased as compared with previous years. 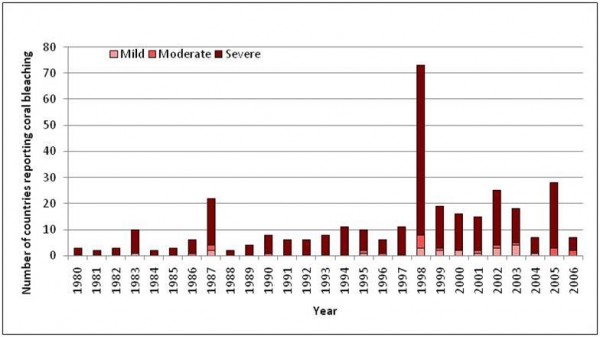 Where is the Worst Bleaching Happening?

Most of the bleaching that occurred during the middle of this year was concentrated in Southeast Asia and the eastern Indian Ocean. The hardest hit areas were Thailand (up to 100% of species bleaching on the Thai peninsula); Malaysia (where scientists estimate up to 20% mortality by fall); Philippines (especially northern Palawan, but also across the Visayan Islands); Indonesia (especially Aceh province where 80% of some species have bleached since May); and Maldives (where 10 to 15% of shallow coral has completely bleached and 50 to 70% have started bleaching).

In late September 2010, NOAA Coral Reef Watch issued a press release warning of predicted bleaching for the southern and southeastern Caribbean through October, because temperatures have been above average all year long, and the early fall months are typically the warmest for ocean temperatures in the region. So far there have been some reports of bleaching in the Flower Garden Banks off the coast of Texas, Tobago, Guadeloupe, and Panama. 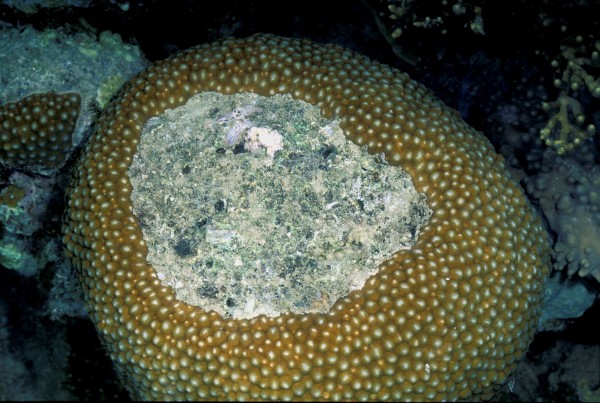 Corals are likely to recover from bleaching if other stresses on them are low—but, unfortunately, in many parts of the world, reefs are facing multiple threats. Other stresses include land-based pollution and sediment runoff, physical damage from anchors or careless divers, and overfishing, which can alter the ecological balance on a reef. In the Philippines, for example, our global analysis of threats to coral reefs finds that most reefs in the areas experiencing bleaching are also pressured by overfishing, watershed-based pollution, and coastal development. These additional stresses will make it difficult for reefs to recover from coral bleaching. 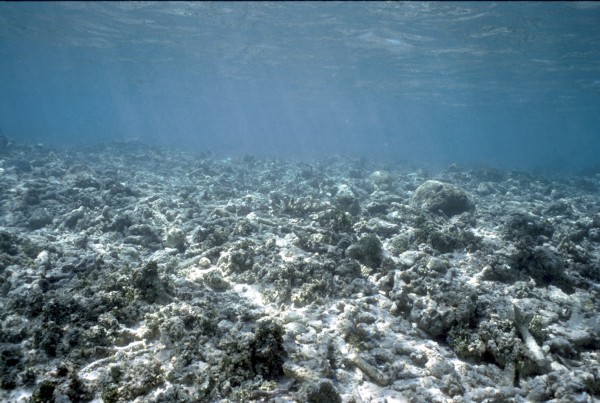 While we don’t yet know the full range or precise impacts of this year’s bleaching event – we do know that rising temperatures are putting coral reefs at risk and that we need to do more to protect these precious and valuable resources.

In early 2011, WRI and our partners will release the results of a spatial analysis of threats to the world’s coral reefs entitled Reefs at Risk Revisited. This comprehensive analysis will include an evaluation of four “local” threats (overfishing and destructive fishing, coastal development, watershed-based pollution, and marine-based pollution and damage), as well as projected “global” threats, which include the effects of climate change (warming and acidifying seas) on reefs through 2050. The report will also provide recommendations on how to mitigate these threats at both the local and international levels.

The Reefs at Risk Revisited project aims to raise awareness about the threats to coral reefs and provide valuable tools for managing these precious ecosystems. Given the scale of coral bleaching this year, there isn’t time to waste.