Enforcement of the amended Lacey Act has begun, both on and off the public radar. Here are tips on how to remain in compliance.

In November 2009, U.S. federal agents raided Gibson Guitar Corporation’s manufacturing facility in Nashville, Tennessee as part of an investigation into the illegal trade of a rare wood species allegedly used in some of Gibson’s musical instruments. Although the seizure made headlines, few people are aware that this was not the first enforcement of the 2008 amendments to the U.S. Lacey Act which banned commerce in illegal timber and paper products in the United States. There was one before it that has received little attention, until now. 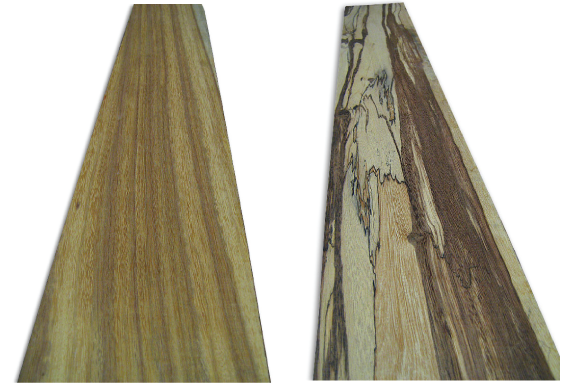 A plank of tigrillo (Swartzia arborescens) on the left and of tigre caspi (Zygia cataractae) on the right. Photos: www.woodworkerssource.com

Five months earlier, agents of the U.S. Fish & Wildlife Service seized three pallets of tropical hardwood as they entered the Port of Tampa, Florida from Iquitos, Peru. Originating deep in the Amazon, the pallets contained numerous species of decorative woods, including tigrillo (Swartzia arborescens), palisangre (Brosimum rubescens), and tigre caspi (Zygia cataractae). Unlike the Gibson case, agents confiscated the wood on grounds that the shipment violated Lacey’s declaration requirements. The seizure was supported by substantial evidence that the exporter was using stolen and forged documents. [Details of the U.S. Department of Interior Decision are available here]

It appears that the amended Lacey Act has teeth. Enforcement has begun, both on and off the public radar. This is a good development for the world’s forests and for all law-abiding businesses.

The century-old U.S. law has been an effective means of curtailing illegal wildlife trade. It was amended in 2008 to cover products made from trees and other plants. In effect since May 22, 2008, the law: 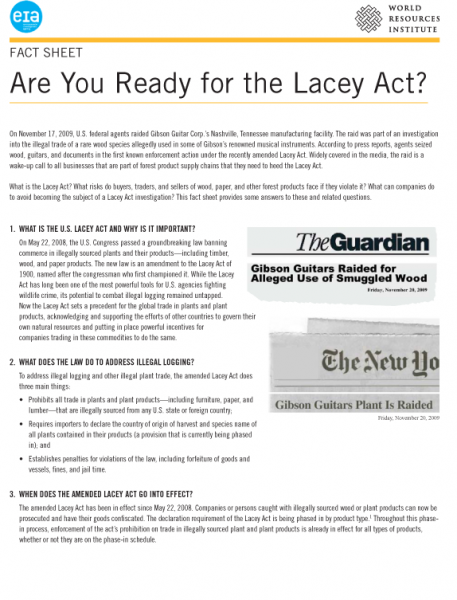 The seizure of Peruvian tropical hardwood provides several insights into enforcement of the amended Lacey Act and what one needs to do to remain in compliance, namely:

1. Take the declaration requirement seriously—the U.S. government does. Declarations are the first line of defense against the import of illegally harvested wood and other plant products. Because of this focus, it is important to correctly fill out your declaration forms.

2. Heed red flags. Peculiarities that arise in the course of a business transaction should trigger an importer or buyer to ask more questions about the product’s origin and legality and, if necessary, step away from the transaction. The Peru case had at least four peculiarities. First, this was the first time the buyer had imported from Peru, thus it was purchasing from an unfamiliar source market. Second, an exporter in Peru contacted the buyer out of the blue with wood to sell; the buyer did not initiate the deal. Third, prior to the transaction, the buyer had received an email indicating that the company supplying the material had suspended its business operations. Fourth, the supplier in Peru requested receiving payment via money order made directly to an individual, not a company. Red flags, anyone?

3. Demonstrate due care. At the core of the amended Lacey Act is the responsibility of each buyer—no matter where in the supply chain—to conduct “due care.” Due care is the legal term for exercising the level of appropriate action that would be taken by a reasonably prudent person under the same circumstances to minimize the risk of purchasing plant products that were harvested or traded illegally. The Office of the Solicitor stated that the buyer of the Peruvian wood “did not do all he could within his power to comply with regulations and ensure that the shipment was authorized by an export permit that properly documented the required information and was declared appropriately under the Lacey Act upon arrival to the United States.”

What could someone in the buyer’s position have done? Well, is this the first time you are buying wood or paper from a particular country? Then learn about the degree to which illegal logging is prevalent there and assess your comfort level with assuming this risk. Is this a new supplier? Then do your homework on it. Did you learn of problems affecting the supplier? Then probe further to understand the nature of the problems and the level of risk they pose to you. If this and other research still leaves you suspicious, find another supplier. Document your efforts in writing.

4. Be aware that there are many ways to detect Lacey violations. False declaration statements, satellite imagery of logging in protected areas, fiber testing to identify protected species in a sheet of paper, random wood inspections, and undercover investigations of illicit transactions are but a few of the ways people can detect violations of the Lacey Act. Two played an important role in the Peru case. First, on the declaration form, the buyer’s import broker classified the three pallets as containing finished wood products when, in fact, the pallets contained raw wood. This incorrect classification enabled the importer to avoid having to fill out more detail about the shipment since, at the time, full declarations for finished wood products had not been phased in. But a visual inspection can detect the difference. Second, the U.S. Fish & Wildlife Service received a tip in May 2009, based on substantial evidence, that a shipment of wood from Iquitos, Peru with stolen and forged documents was on its way to Tampa on the ship Yacu Puma. The “tipster” had become aware of the cargo when he received a bill from the shipper for a shipment that was not his. There are many “eyes and ears” out there, some from unsuspected places.

5. Manage your supply chain. Lacey Act violations can occur anywhere along the forest product supply chain. Thus the well worn adage “a chain is only as good as its weakest link” applies here too. In the Peru case, actions by the broker had ramifications for the buyer.

6. Ignorance is no excuse. In the words of the U.S. Department of Interior’s Office of the Solicitor involved in this case, “a company that specializes in international shipments should be well versed in the applicable laws that govern such transactions and should also be up to date on any amendments to the laws. The Lacey Act amendments were passed in 2008, giving the industry time to adjust and become familiar with the changes before enforcement began.”

One concluding insight is that there is a lot going on behind the scenes. This wood seizure occurred in June, 2009 but is now just coming into public light. How many more actions have occurred and how many investigations are currently underway that are still confidential for legal reasons? Nobody knows.

But what we do know is that the U.S. government has given the amended Lacey Act teeth.

For more information about how you can conduct due care when purchasing forest products, visit www.forestlegality.org.