Could a major industrialized country be powered entirely by renewable energy? Germany wants to be the first to try.

On September 8, WRI and the German embassy hosted an event featuring Jochen Flasbarth, President of the German Federal Environment Agency, Umweltbundesamt (UBA). The event, moderated by WRI President Jonathan Lash and with respondents Christopher Flavin, President of the Worldwatch Institute, and Ana Unruh-Cohen, deputy staff director for the U.S. House Select Committee on Energy Independence and Global Warming, highlighted UBA’s effort to figure out how the country could transform its electricity supply to 100 percent renewable energy by 2050.

Germany has pledged to reduce greenhouse gas emissions by 40% below 1990 levels by 2020 and by 80-85 percent by 2050 from 1990 levels. The country’s motivations for this steep reduction are both economic and environmental. While climate change is a driver, the economic benefits from eliminating energy imports from foreign sources, combined with the country’s desires to remain a leader in green manufacturing, as countries like China ramp up their renewable production, encouraged further ambition. 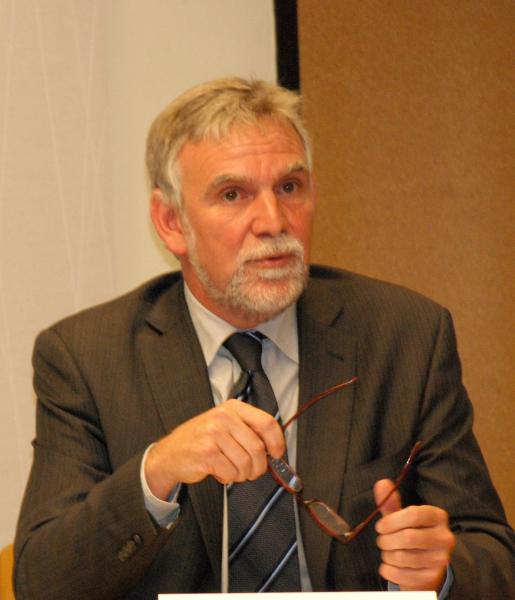 “Reshaping our energy system is not only an answer to the climate change challenge, but part of our green economy strategy,” Flasbarth said.

Flasbarth presented the results of UBA’s research, which focused on the electricity sector. UBA’s analysis was based on three primary assumptions: first, that all regions of the country exploit their best available renewable energy resource potential, second, that there would be an increase in the exchange of electricity between the different regions of the country, and third, that there would be very few imports of energy from other, neighboring countries. Ultimately, the agency found that a carbon-neutral grid could be achieved in Germany under these conditions, even while maintaining its highly industrialized status and without significant changes in consumption patterns and lifestyles. “We went on the safe side, using a conservative estimate, knowing that people will not change dramatically,” Flasbarth said.

UBA found that Germany could achieve a carbon-neutral grid, even while maintaining its highly industrialized status and without significant changes in consumption patterns and lifestyles.

In the scenario presented at WRI, UBA envisions their power supply to be adapted to their geographic circumstances – an energy mix based on solar photovoltaics, wind, biomass, and a large portion of geothermal. In his opening remarks, Jonathan Lash pointed out that Germany is already a leader in clean energy. Even during the recession, investment in German renewable rose 20 percent. Furthermore, by 2009 the country employed over 300,000 people in renewable energy sectors, an 87 percent rise since 2004. At the same time, German business confidence just rose to a 3 year high. In contrast, as Christopher Flavin pointed out, the United States produces slightly lower levels of renewable energy – as a share of its total energy use – than it did in the early 1990s.

Germany’s success is tied to the policy support they have in place – in particular, a feed-in tariff has been critical to scale up wind power, solar power and other renewable electricity sources. The long-term and stable nature of the feed-in law famously provides a high-level of investor certainty, making renewable energy in Germany a relatively safe investment, particularly during today’s difficult economic times and unstable financial sector.

In subsequent reports, UBA will analyze two other scenarios for reaching a zero carbon power supply in the coming months. The study (in German) can be downloaded here. The Executive Summary is available in English below:

In order to achieve an 80 – 90% reduction in Greenhouse Gas (GHG) emissions by 2050 we will first have to transform our electricity supply system. The energy sector holds a key function regarding GHG emissions by currently causing more than 80 % of the emissions in Germany. Within this sector the electricity supply is responsible for about 40% of energy-related CO2 emissions. The potential for reducing emissions in the electricity sector is very high. Provided a highly efficient use of electricity and energy conversion, as well as an energy supply system that is completely based on renewable energies, it will be possible to reach a level of nearly zero GHG emissions.

For Germany, the technological change towards an electricity supply system completely based on renewable energies by 2050 is possible. By doing so, Germany’s status as a highly industrialised country can be maintained, as can its subsequent ways of living, patterns of consumption and behaviour. This is shown in our simulation of the scenario „region´s network scenario” as well as in several studies of other institutions like the German Advisory Council on the Environment (SRU), the German Enquête-Commission on sustainable energy supply or Greenpeace.

Our results should be regarded as one part of a level playing field needed to create a 100 % renewable electricity supply system by 2050. Aside from the regional scenario, we also sketch two other scenarios: International large scale application of technology and Local Energy Autarky. For these two scenarios we intend to go more into depth within further studies as we expect them to provide further momentum towards achieving the level playing field.

A switch to an electricity supply system based on renewable energies will also be economically beneficial. The costs of such a change in the energy supply are significantly lower than those of adapting to an unmitigated climate change we and future generations would have to otherwise face. Germany could link a respective strategy to a successful economic development whilst creating important momentum for current international climate negotiations.

An electricity supply system completely based on renewable energies can provide the security of supply for today’s high level of demand and at any hour of the year. The results of our simulations show that renewable energies can supply the demand for electricity and provide the necessary control reserve. Load fluctuations of the renewables can be safely compensated for at any time as the different forms of energy conversion, energy storage and intelligent load management complement each other sufficiently.

As an important condition for achieving this 100% renewable electricity supply, we have to tap the existing energy saving potential at the same time. This applies not only to the energy use of private households. Despite the expected economic growth, industry, trade and commerce also have to reduce their energy consumption by achieving the existing energy saving potential. If this is the case, renewable energies can provide the substantial additional electricity demand from new applications like electric cars or heat pumps for heating and hot water. To limit future electricity consumption for heating, a very good insulation of buildings is a basic requirement.

70% of the current primary energy consumption in Germany is based on the import of coal, natural gas or uranium. A complete supply of electricity from renewable energies could therefore dramatically reduce Germany’s dependency on such imports and decrease vulnerability to fluctuating or rising oil- and gas prices.

It is important to define intermediate goals, particularly for the period after 2020. Generally, it can be said: The earlier we start decisive actions the more time we will have to tackle the upcoming challenges of necessary technological and societal adaptation!