The United States could become a leader in wind energy jobs with the right policies in place.

Job creation potential for the wind sector in the United States

Wind power is a nascent industry in the United States, but has the potential to spur job creation. Several studies show that wind power creates more jobs than power generation from fossil fuels. The nature of wind power is more labor-intensive than traditional energy, and it creates jobs in both manufacturing and skilled scientific, engineering, and service roles. However, compared to other large regional markets for wind, the United States has yet to reach its full job creation potential in the wind industry.

As wind installations are expected to grow in the United States, jobs are likely to follow. Many of those jobs will have to be located close to installation sites, including project development and planning, construction and installation, and operations and maintenance jobs. Additionally, research by the World Resources Institute (WRI) and the Peterson Institute for International Economics (PIIE) has found that most of the manufacturing jobs will be local too.

Stable and predictable demand for wind power results in domestic jobs. Wind power companies tend to set up regional production hubs and create jobs in each of the major markets – the United States, Europe, China, and India – in order to supply those markets locally. WRI and PIIE research found that global wind turbine makers prefer to invest locally because it is a smart economic decision. The nature of wind turbines – bulky and hard-to-transport – makes shipping expensive, for one example. 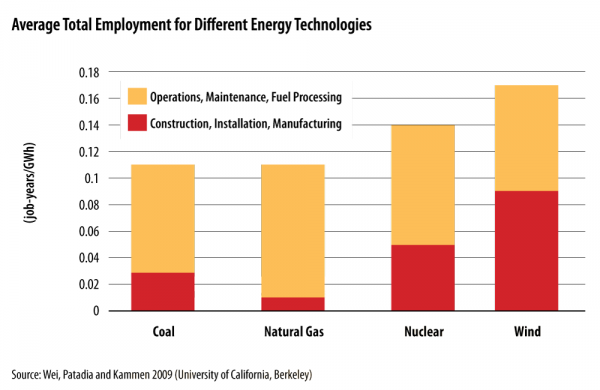 Producing turbines overseas and importing them only makes sense if companies do not want to invest in permanent manufacturing facilities in a given market because the support policies are too unstable. But when countries have stable support policies in place, the bulk of the equipment is produced domestically. Since the United States currently does not have the capacity to produce all parts necessary for wind turbines domestically, companies will also need to source some parts globally. Additionally, global trade provides added fl exibility to overcome supply constraints and to meet deadlines. However, with the right policies in place, more manufacturing capacity would be developed in the United States and the share of domestic components in wind turbines would continue to increase.

Job growth in the wind industry is driven by wind power demand. The countries that lead in wind energy jobs are those that offer a stable and predictable framework for investment in wind power generation. The countries leading development of wind energy use a range of support policies to help speed up deployment and drive technological innovation and cost reductions, including feed-in-tariffs and renewable energy standards. Additionally, a price on carbon would send investors a long-term market signal and allow wind power to become competitive with fossil fuels, increasing the overall demand for turbines and equipment and thus the number of jobs. These policy tools create a legal framework that guarantees predictable returns to wind energy investors, but do not provide a direct government subsidy. In contrast, in the United States, federal support for the wind industry has been through the production tax credit (PTC), subject to periodic renewal. In years where the PTC expired, new wind investments collapsed. Large wind markets with stable long-term financial support in the forms of a feed-in tariff, such as Germany and Spain, have seen more constant market expansions and job creation. 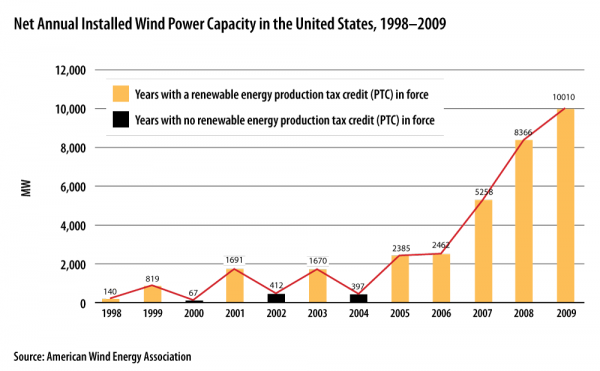 Recent developments in the United States confirm the importance of policy support. The wind industry has experienced a period of rapid growth recently, as state-level support programs have grown and Congress renewed the production tax credit from 2005 on. In 2008 alone, 55 new facilities producing wind turbines and components opened. All of the 11 leading global wind turbine manufacturers that sell a significant number of turbines in the United States now also operate production facilities in the country or plan to begin operating in 2010. The domestic content of turbines installed in the United States has risen from an average of less than 20 percent in the period 2001–2006 to over 50 percent in 2008. A continued policy commitment to wind power is essential to sustain this trend.

To maximize wind energy job growth in the United States, Congress should: